My first home computer was a Commodore 64, and I had a great time playing many classic games during the 1980's before we upgraded to an Amiga 500.

Most Commodore 64 floppy disk based games are preserved these days from their original physical medium as d64 format and tape based games in t64 format. These files can be easily obtained via Google.

I have to say to be honest that I am only interested in the C64 emulation - and I am pleased to report that it runs at full C64 speed on the X1000.

Below is an example screenshot of VICE running one of my favourite C64 games Nodes of Yesod, on the X1000: 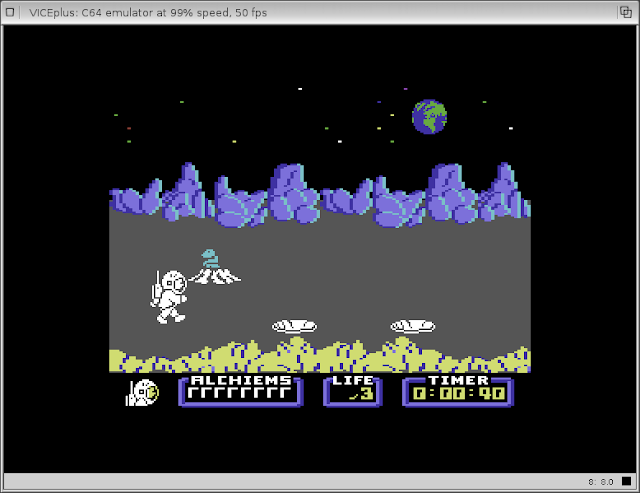 Something to be aware of before running VICE is that if you want to use USB joysticks with the emulation, you need to do some config work which I will explain below.

First, run AmigaInput prefs (as shown below). You must do this everytime before you run VICE if you have not done this step since powering on the X1000. 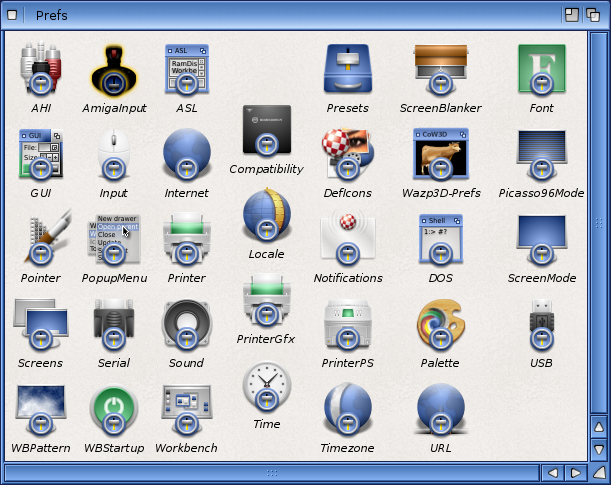 When you runs AmigaInput preferences, you will get a window like the one below. Click on USB in the Available interfaces section, and then highlight your USB joystick in Available Drivers section as also shown below. Then click Save. 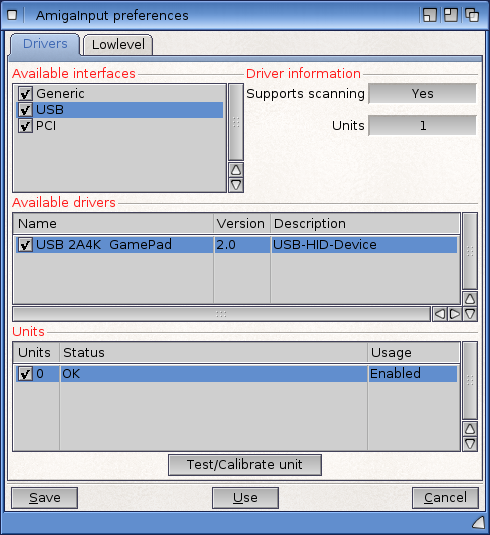 This step is needed so that the USB joystick is recognised in AmigaOS 4 and thus made available to VICE. Little bit weird to be honest, and should be working without this step I think, but the joystick doesn't work if you don't! If you know another way please let me know!

Next, when running VICE, we need to change the control method from the keyboard to use the USB joystick. To do this, right click on the top menu, then highlight Settings Menu and select the Joystick Settings option. On the Joystick settings window that appears I will config the Joystick in Port #1 on the Commodore 64 to use AI/Keyset A. You do this by clicking on the cycle menu (as shown below) until AI/Keyset A is shown: 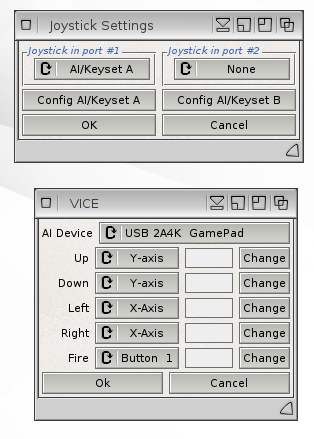 We then need the click on the AI/Keyset A button to show the VICE window (shown above) and configure it to use the USB Joystick. In the AI Device section, select your USB joystick as named in the AmigaInput prefs window shown earlier. Then click Change next to each of Up, Down, Left, Right, Fire sections - it will then wait for the joystick input - move the joystick in the appropriate direction to configure it. Then click Change for the next one, and so on. When finished press Ok.

Before we click on Ok in the Joystick Settings window, note that now the AI/Keyset A is set for your Port #1 joystick. You can change Joystick Port #2 to use the same keyset when you need to use the joystick in port #2, instead of port #1. C64 Games tended to change which joystick port they used so from this setting window you can change the port by selecting the AI/Keyset A to whichever joystick port you need it to work on. This setting can be changed while the game is running in the emulator.

So if you now click on Ok for the Joystick Settings window, you are done and ready to load a games into VICE! (There is a lot more customisation that can be done to VICE in the Settings menu, but it is not needed to play games and I wanted to get to that part!)

I am assuming that if you read this far you probably owned a Commodore 64 at some point and are familiar with how they work to load games. If not I include a little bit of simple instruction.

I should note that some .d64 have just the one game on them, some of them have more than one game. So for disks with just one game on them, right click the top menu, highlight the File menu and select the Autostart disk/tape image... option. It will then open a window requester prompt for a d64 or t64 file, and when you select it, it will automatically load the first game title from the disk and run it automatically too, as below: 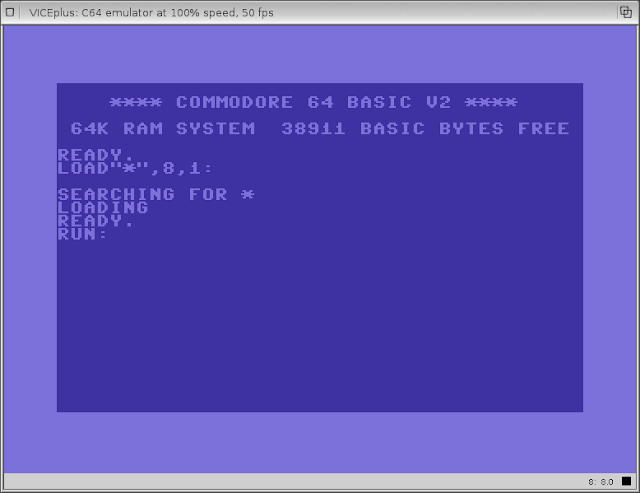 For disks with more than one game on them, right click the top menu, select File menu, highlight Attach Disk Image option and then from the submenu, select the Drive 8 option. It will then prompt a window requester to choose a d64 image Then on the C64 screen in the emulator, type in:

Press Enter. When it comes back with the READY. prompt, type LIST and Press Enter.

This will bring up the list of the disk contents. you can then load the game you want by typing in the name of the game shown using the list command. eg:

Press Enter. When it comes back with the READY. prompt, type RUN and Press Enter. The game should now run!

I didn't focus much on tape image manipulation (nearly all my games are d64 images), but this VICE emulator support all standard tape operations (as many tape games required fast forward or rewind to particular counter positions to work) - disk images are so much easier to manage and recommended!

So next of course I tried out some of my favourite C64 games on VICE which all run perfectly during my testing - and I did a lot of testing playing!

When finished one game, you can reset the C64 for the next game from the File Menu - highlight the Reset option, select Hard from the submenu to then reset the C64. Then load the next disk/tape images as shown previously above.

I didn't try out any demos on the C64 because I have never watched any C64 demos (terrible I know)! I do follow the Amiga demo scene and PC demo scene closely, but never really got into the C64 demo scene!


I include some screenshots below of the games while they were running on the X1000: 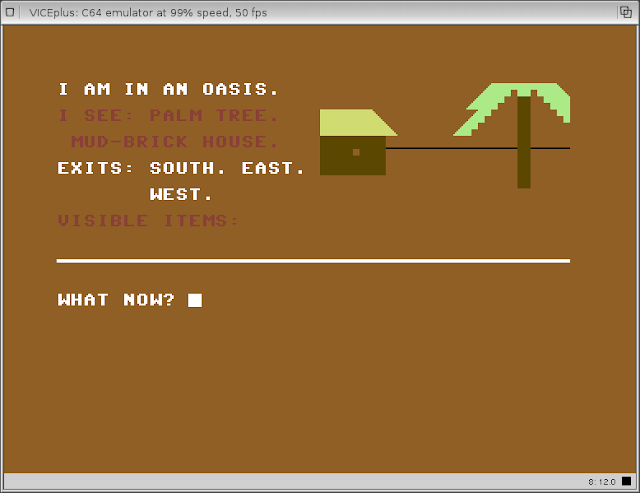 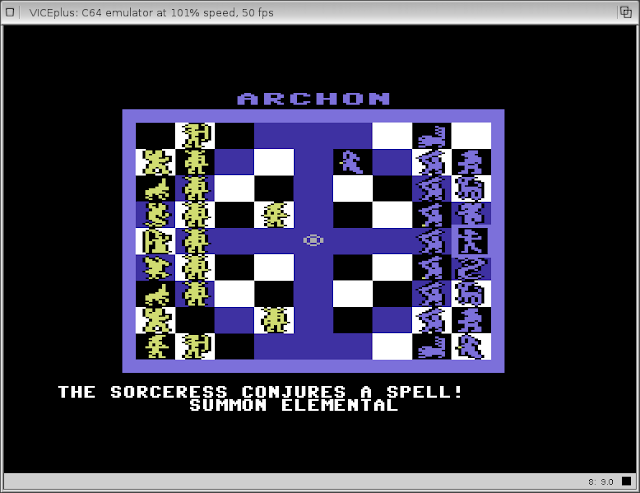 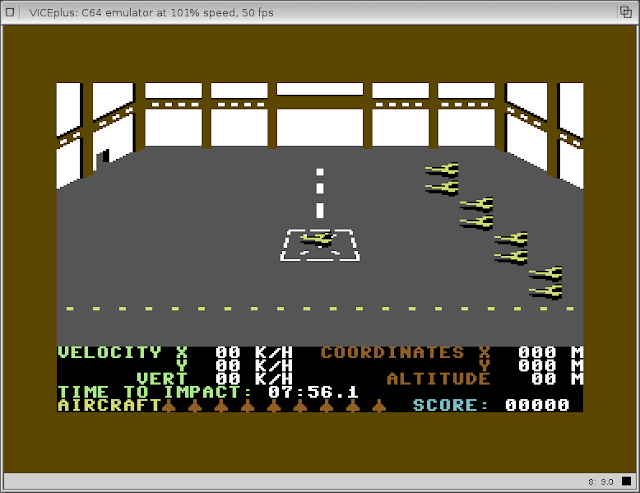 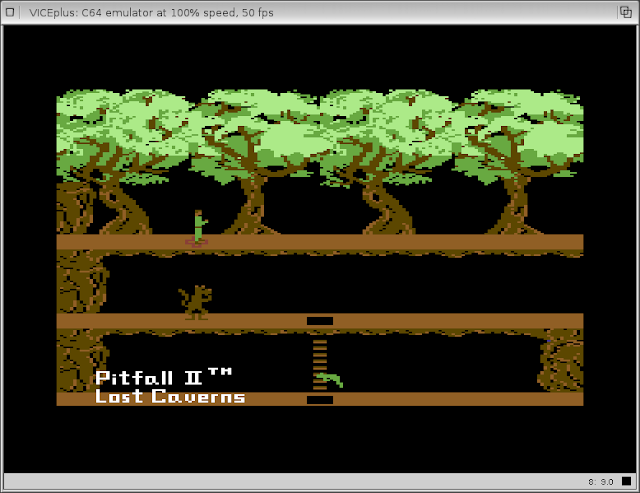 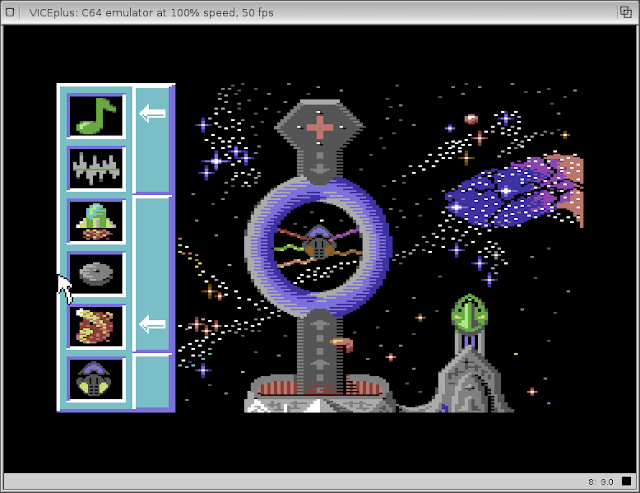 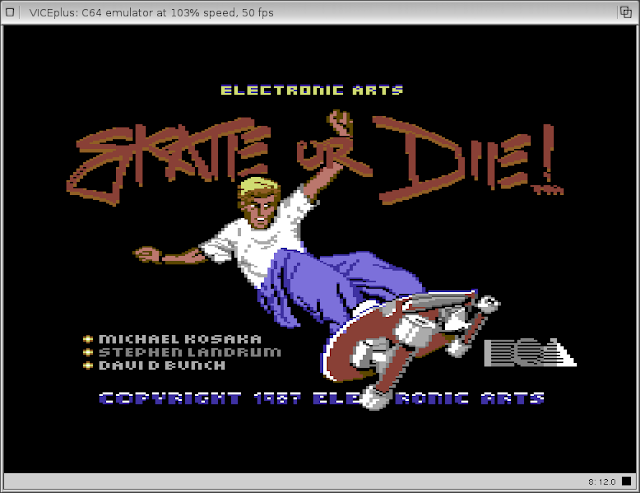 I have many more games I tried out in the emulator and they all worked well - classics like The Last V8, BC's Quest For Tires, Hot Wheels, Wizball, Parallax, Beach Head I and II, Rock N Bolt, Bobby Bearing, Impossible Mission, Katakis, R-Type, LED Storm, Pinball Wizard, Raid on Bungeling Bay, Ghostbusters, and so many more.


One of the reasons for the delay in this blog entry was because I got carried away playing Nodes of Yesod and Mutants again - I loved these games as a kid and still they are a lot of fun to play!

I hope this inspires you to try out your favourite Commodore 64 games on your X1000 - they run perfectly!