Today I wanted to show an interesting LCD screen from Acer that is a current model, available brand new in 2017. 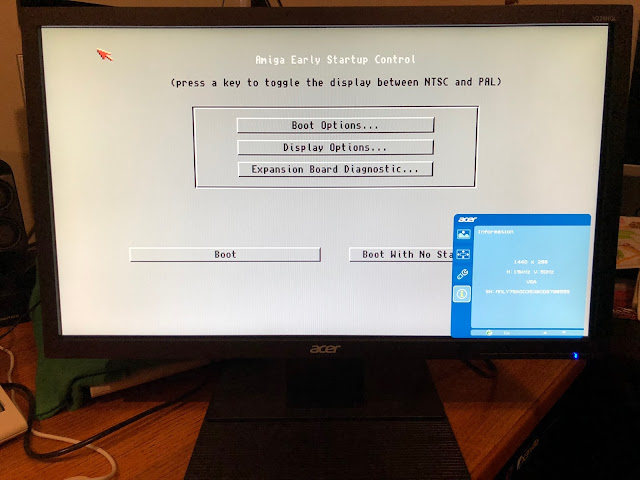 What is so special about it you ask?

Well, it supports Amiga video modes that run at 15khz! So with a RGB to VGA converter you can get native Amiga display on a modern LCD screen, without the need for a scan doubler! Exciting right?

The model I got is a V226HQL model, with the exact information taken from the screen for your reference if you want to get one yourself. Even though I bought this new in it's original box, it is a few years old. I have seen others on Facebook using ones made in early 2017 that work also: 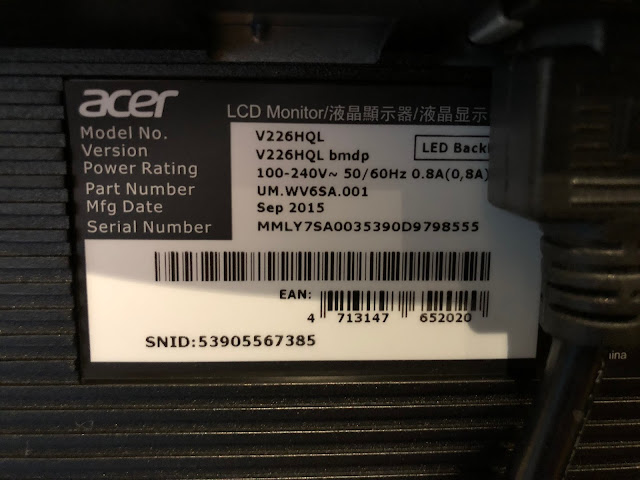 Of course, the Amiga uses a non-standard 23 pin RGB connector, intended for connection to Commodore CRT 1084(S) / 1940 or 1960 monitors. These take up a lot of room and the non-flat displays are very small in this day and age.

To connect the Acer screen to the Amiga, I needed a RGB to VGA converter. This is not a scandoubler - it just converts the existing 15khz signal from RGB to VGA.

These are easy enough to come by on Ebay, but check carefully to get ones that have a REAL 23pin connector, rather than a DIY hacked 25 pin connector on them. Generally sellers try to hide the fact they hack the connectors to make them fit a standard Amiga RGB connection since 23pin connectors are not exactly easy to come by these days. Check the photos carefully and read the seller feedback.

I found a seller on Ebay who makes these converters (from Canada actually), using the right 23 pin RGB connector. I ordered 3 of them!

Here is the converter I received last week: 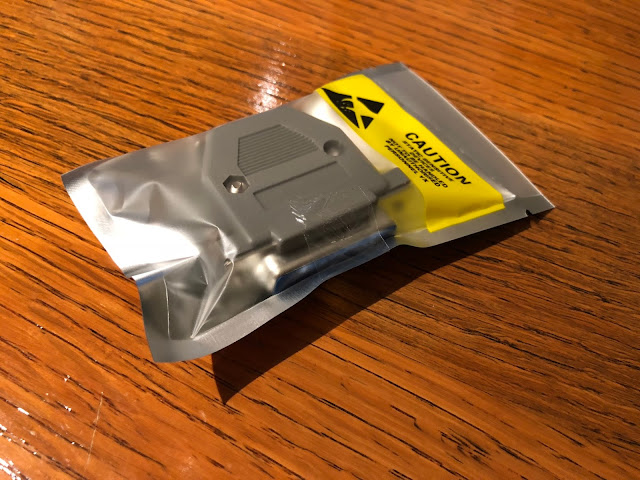 As you can see it looks well made and the connectors are perfect - here is the RGB connector side: 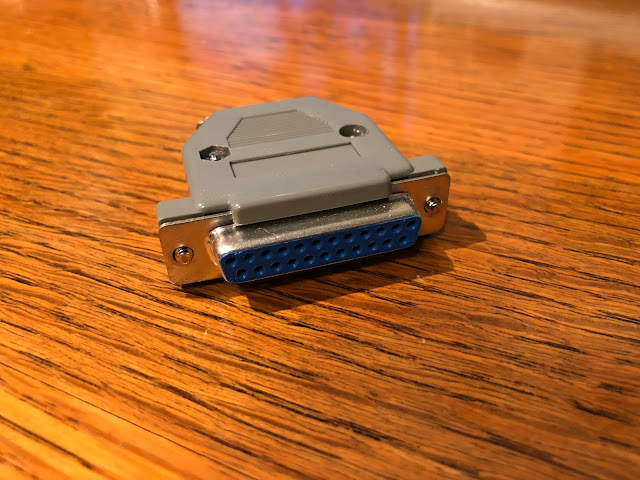 And here is the VGA connector side: 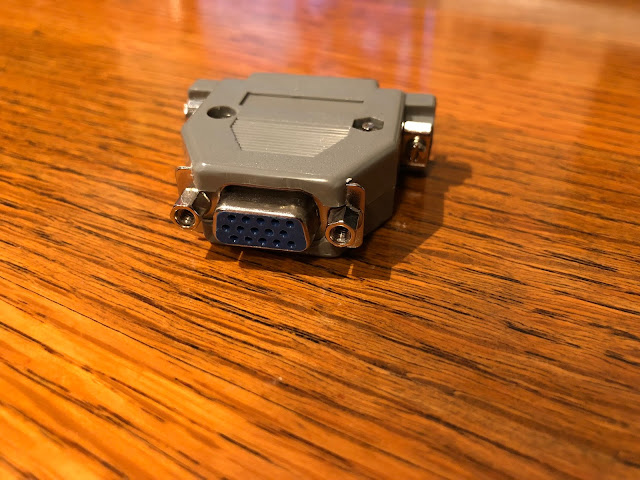 Since I happened to have the Amiga 1200 out at the time, I decided to try it on that system first. Technically I don't need it since I have an Indivision AGA installed in it already, but hey, why not check it anyway! Here it is connected to the A1200: 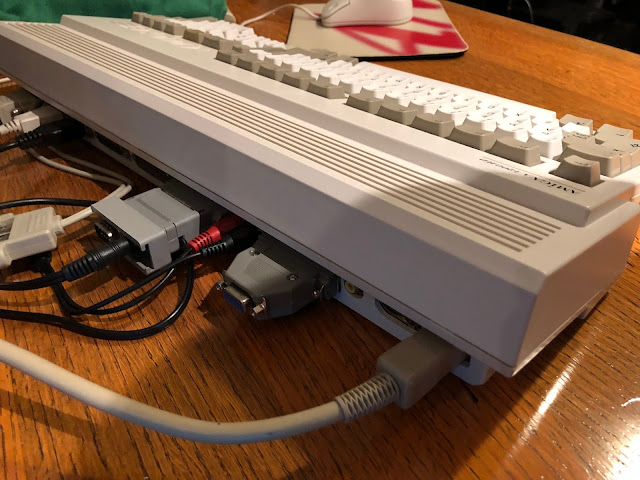 On power on I held down both mouse buttons to get the early boot screen, which appeared on the Acer screen straight away! I then brought up the screen mode info screen to confirm it is indeed running at 15khz!! 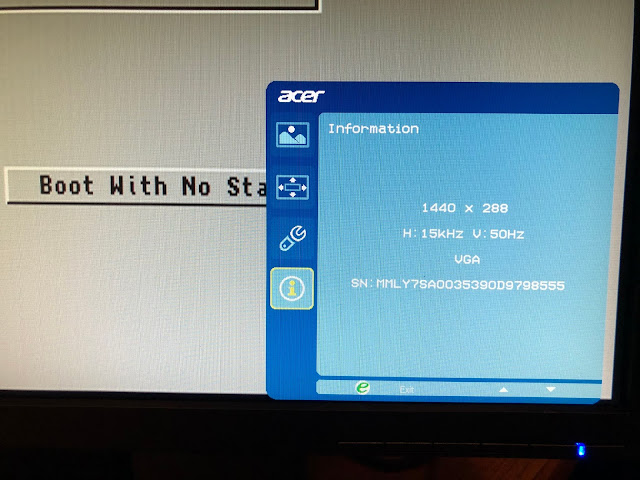 The screen does promote the screen to this slightly odd 1440x288 screen mode, but it looks fine and the aspect seems ok too. I tried modifying the usual fill screen/aspect control to adjust it to 4:3, but it doesn't change the screen. So the resolution is what it is, but as I said, it displays fine from what I could see. 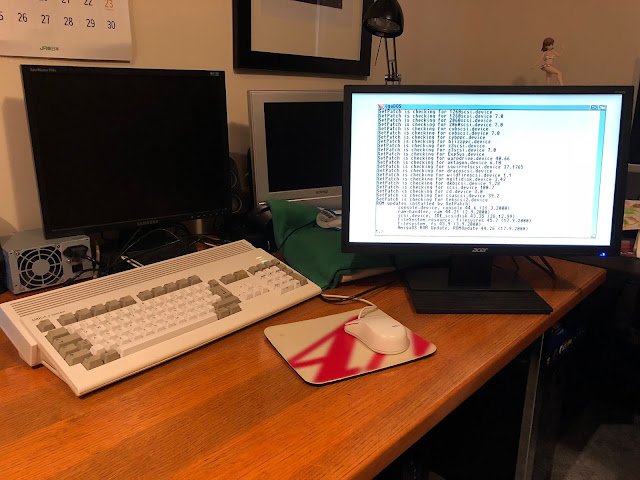 I moved the screen to a better place since it seemed to be working fine: 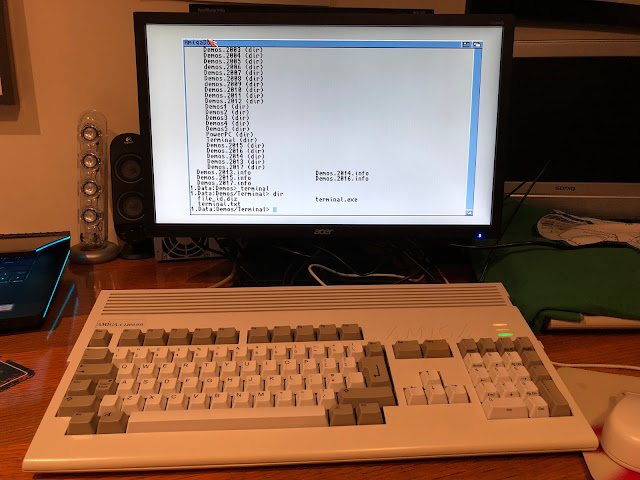 I then decided to try a different Amiga. I hooked up the Amiga 600 next. As with the A1200, I already have a Indivision ECS installed in the A600, so technically it doesn't need this screen either.

You can see it installed here, with the MAS player hardware (for MP3 playback) also installed in the back of the A600: 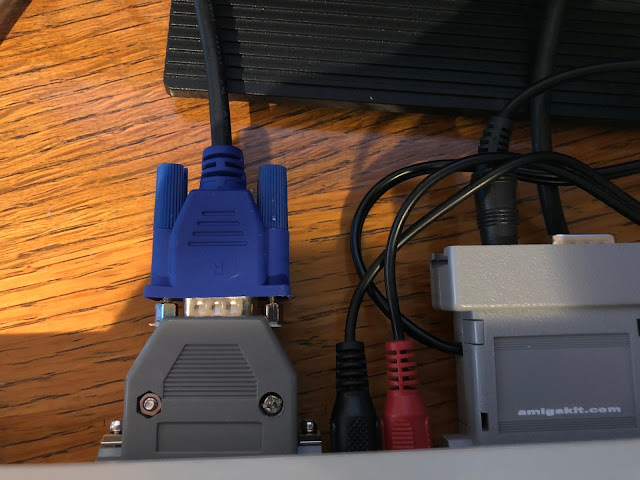 As you can see, the output from the RGB port at 15khz to the Acer screen works fine on the A600 also: 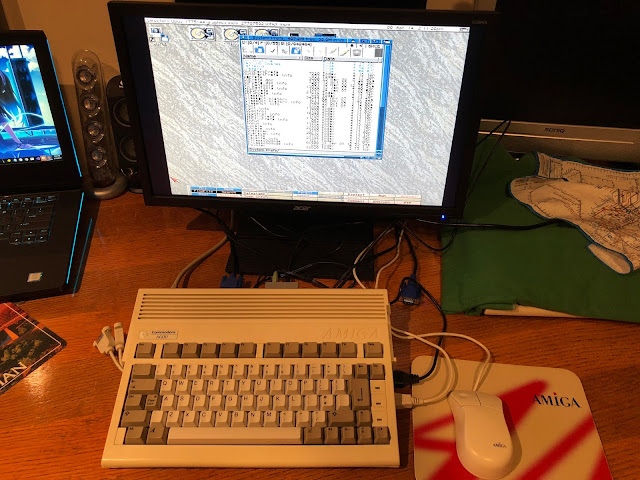 Something to remember though is that because it is native 15khz output that is not scan doubled or flicker fixed, any interlace modes will flicker the screen, the same as all Amigas do on the 1084S monitor or tv output.

Running Bomb's E255 demo on the A600 looked great on the Acer screen: 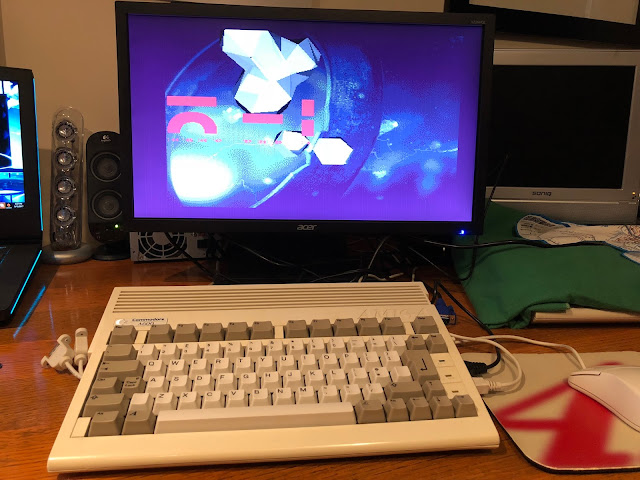 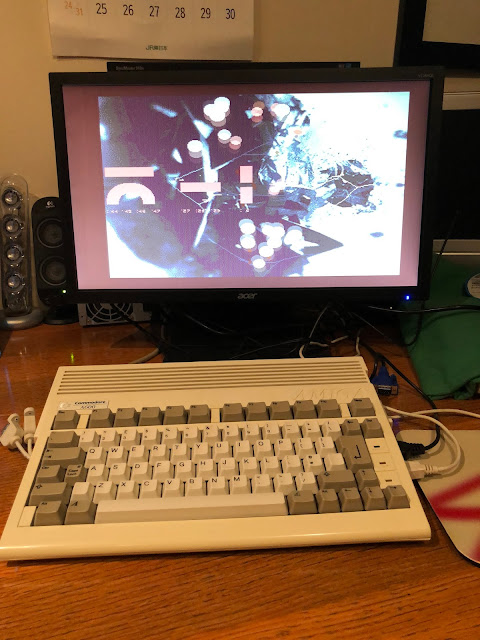 Next up I hooked up the Amiga 1000, one of the systems I wanted to get this screen for. Unlike the other Amigas I don't have a Indivision ECS installed or a scandoubler connected to it. It needs this screen, and so I was very excited to try it out. As you can see the Kickstart screen came up fine on the Acer: 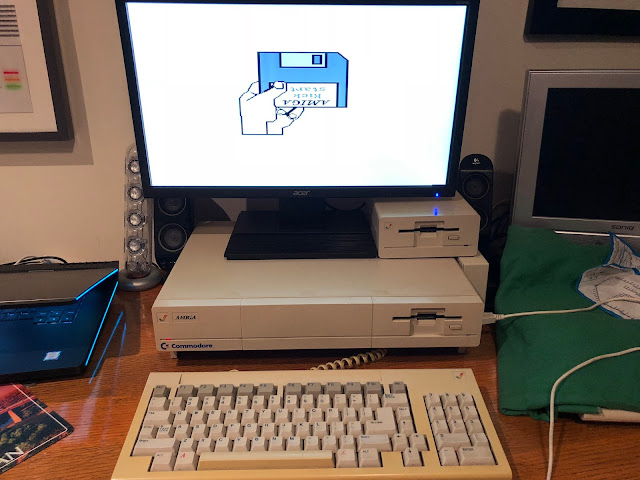 I did hit some trouble here with the Amiga 1000 though. For some reason when I booted any kickstart disk, the system wouldn't display the Insert Workbench disk screen and instead hung on a black screen. The screen was displaying something, but the system wasn't responsive.

As a test I removed the converter from the RGB port so there was no display. I then booted from the kickstart disk and the machine was clicking the drives so I knew it was at the Workbench boot screen. I connected the RGB to VGA converter at this point and the display appeared and worked perfectly! 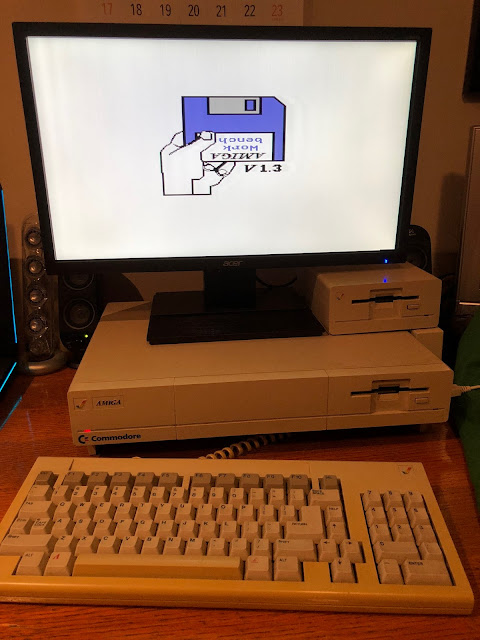 Strange behaviour though. It only seems to happen on the Amiga 1000. I tried 1.0, 1.1, 1.2 and 1.3 kickstarts and also all three converters I bought and they all do the same thing. Having plugged in the RGB to VGA converter after the Insert Workbench disk screen appeared, it did work perfectly on the A1000 though - here is Digital Innovation demo running nicely through the Acer on the A1000 at 16khz? Strange huh? 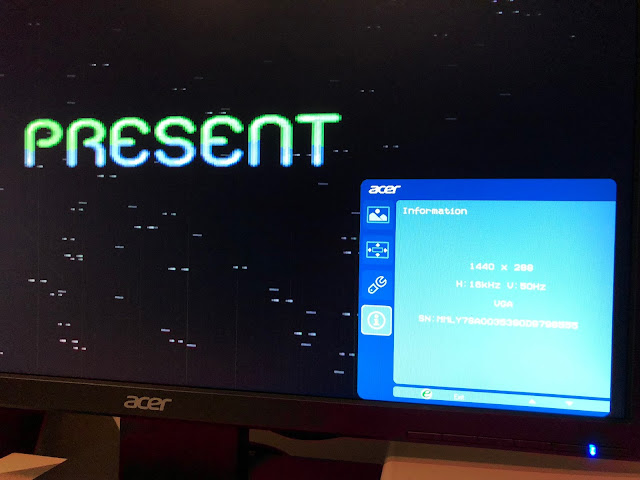 I guess the 16khz is what causes the problems but really don't understand that one. If anyone knows what is happening here please let me know. 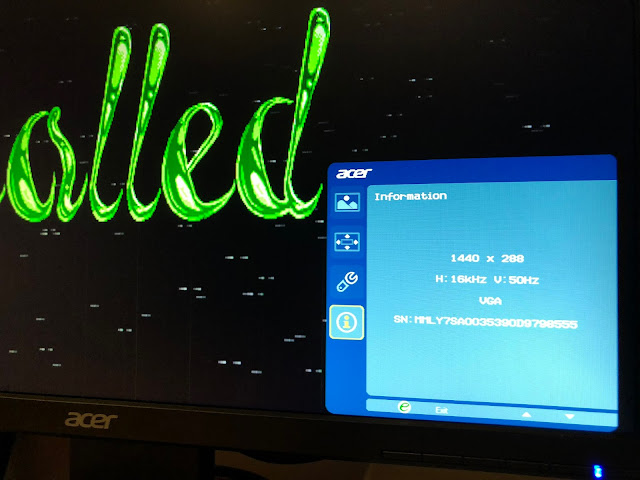 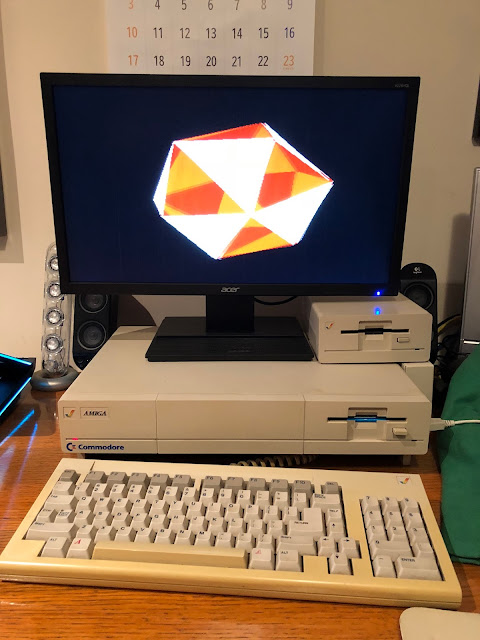 Last, but not least, I connected my CDTV to the Acer screen. It also doesn't have a Indivision ECS scandoubler installed, and until now I use the AV out to connect it to a TV, or my HDMI upscaler to convert the signal to display on my HDMI LCD screens. Now though, I can connect the CDTV directly from the RGB port to this new Acer screen since it can accept the 15khz output. As expected, once powered on it worked great: 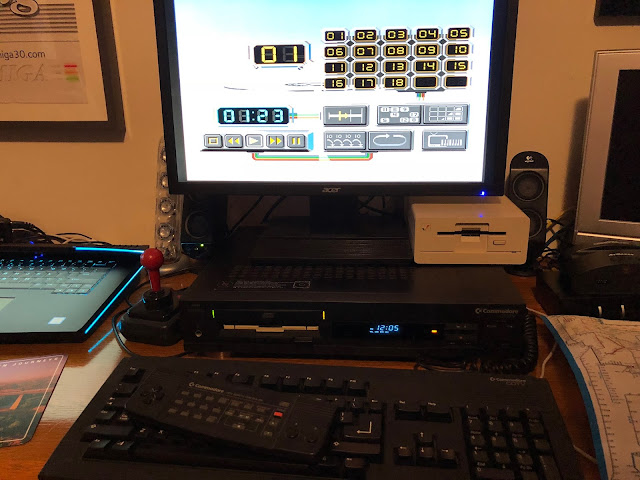 I fired up the rather excellent Rink A Pink demo, booting via floppy and it worked great on the Acer too: 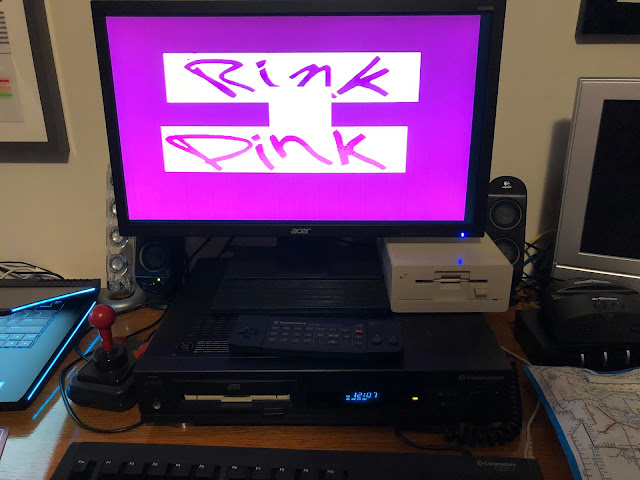 Close up photo shows the output is 15khz: 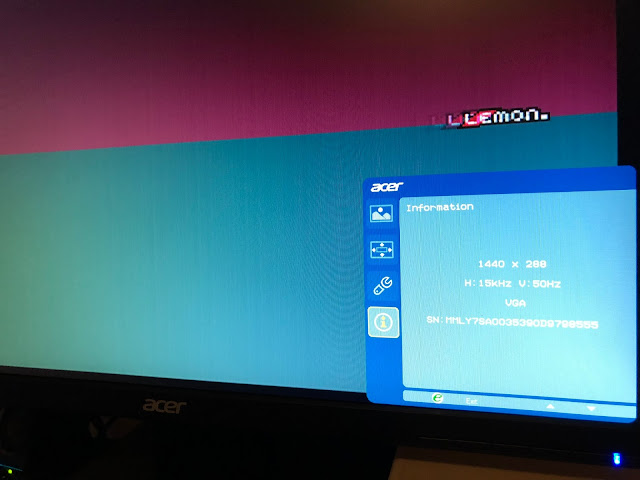 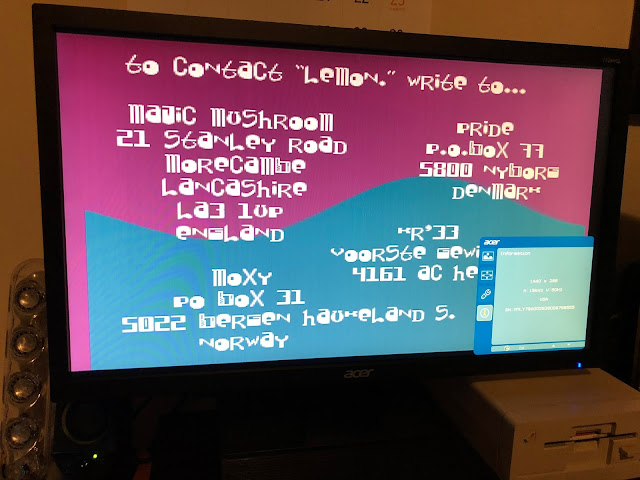 Since I can use it great on the CDTV, I decided to leave it setup for now and played some tunes from the Immortal 4 CD while preparing this blog post. 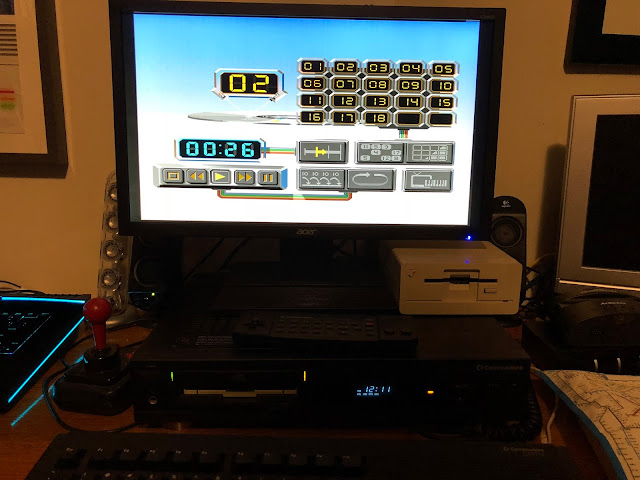 There is a useful wiki that lists all the 15khz compatible models that people have tried out, which includes the one I covered here today. You can read it here.

It is great that we have options in 2017 to output our ~30 year old Amiga systems to modern screens, still supporting the 15khz output required! If I had more room I would buy more screens now that I know they work, but things are tight in here these days space wise. I might get one more though as a backup...