Today I wanted to take a look at the recently released AmigaOS4 game Frogatto on the AmigaOne X1000. 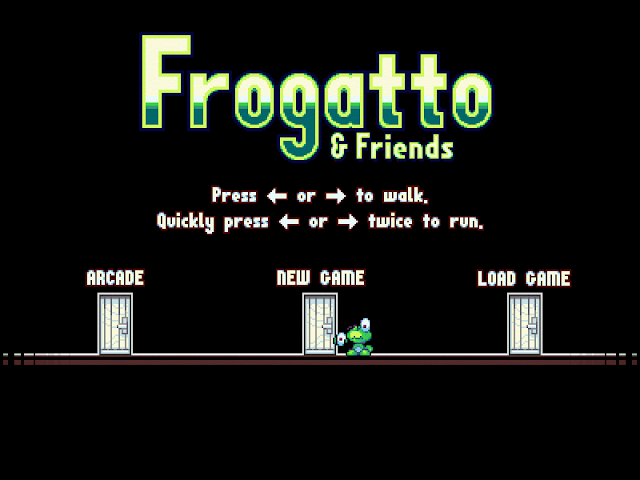 This game is Open Source and is available for free download on www.os4depot.net . It is another game port from HunoPPC, who has done many game ports to AmigaOS4...it is available for most other major platforms too and the original game website is here.

Like many of his game ports, Frogatto requires hardware acceleration which means you need to have a dual graphics card display setup on the X1000 using a Radeon 9250 card in order to run it. I have explained how to do this in a previous post here.

Assuming you have this setup on the X1000 you can try this game out! On extracted the archive, you get a folder containing launchers for different languages and Readme to explain more about the game. Since I was keen to get into it I launched the game! 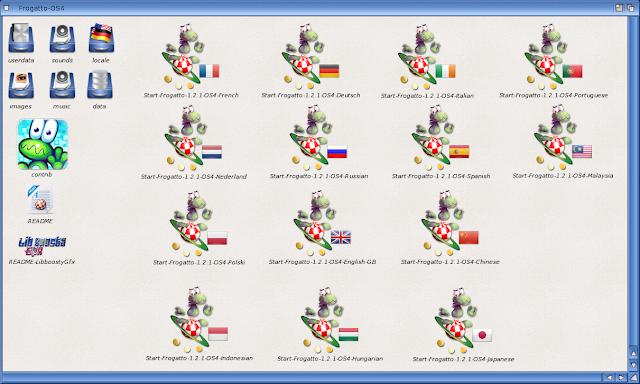 From the main menu I chose the New Game option, which walks you through a very handy tutorial on how to play the game.

Essentially Frogatto is a platform game, moving from level to level exploring for particular items, collecting money and talking to various people to unlock the next part of the game

Below is some screenshots from the game itself. Initially you start off in your home: 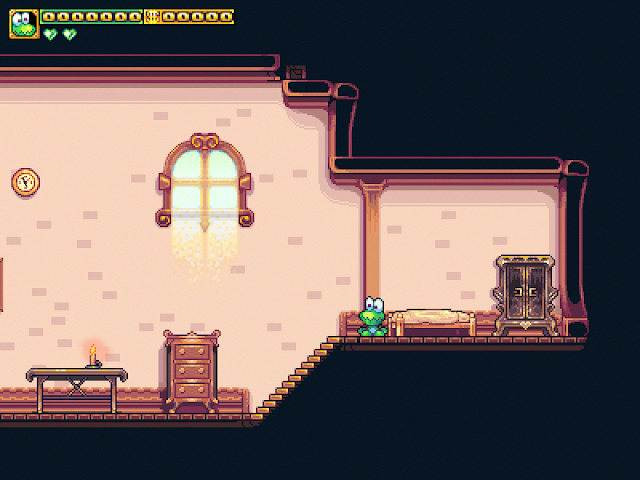 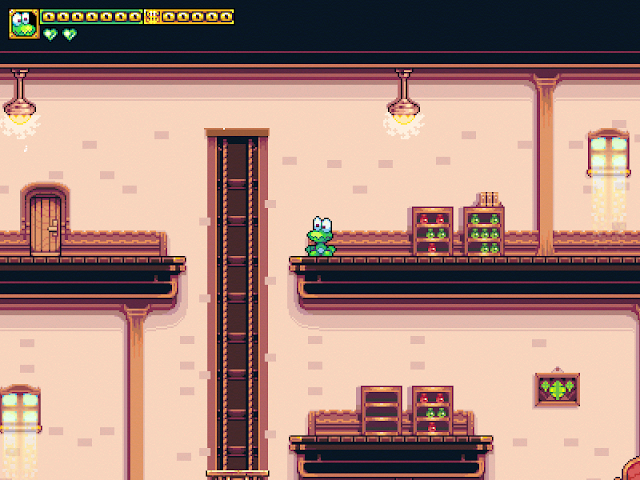 Exploring the house turns up some money! Chilling out next to the water cooler: 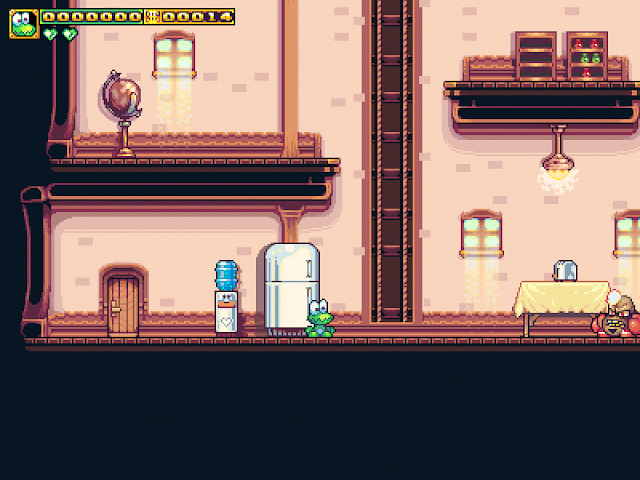 Next you have a discussion and told to go and do something useful! 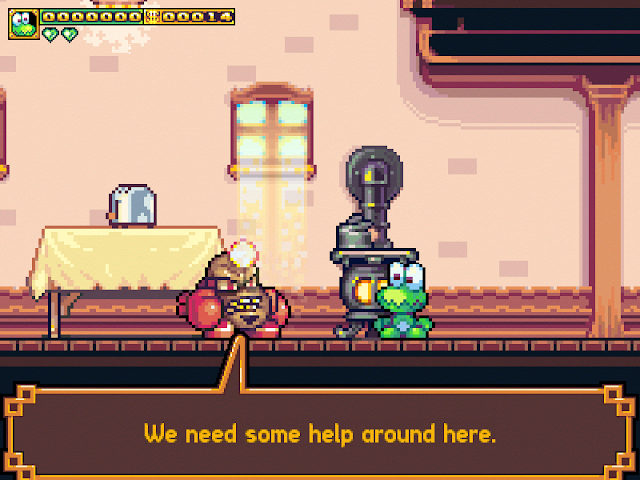 From there you exit the house and begin the tutorial level: 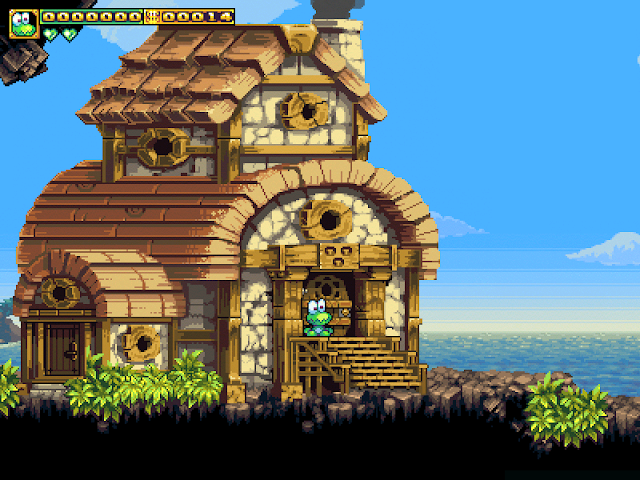 The tutorial as mentioned before is very useful if you haven't played this game, and explains well how to do things in the game: 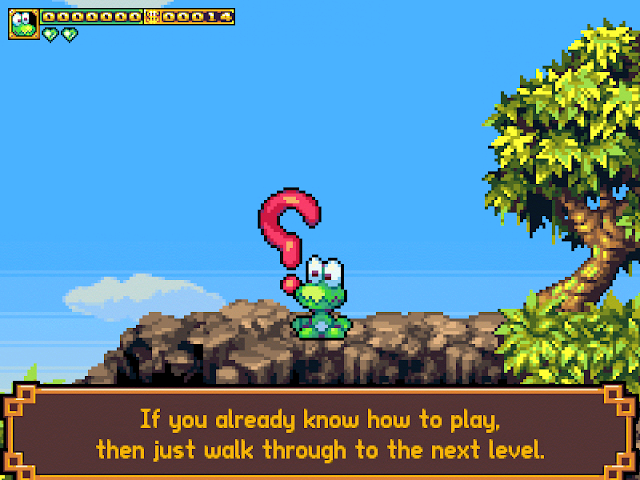 Fortunately you have the option to save reasonably frequently throughout the game, avoiding the need to replay a lot of the game each time. There is only one save file though: 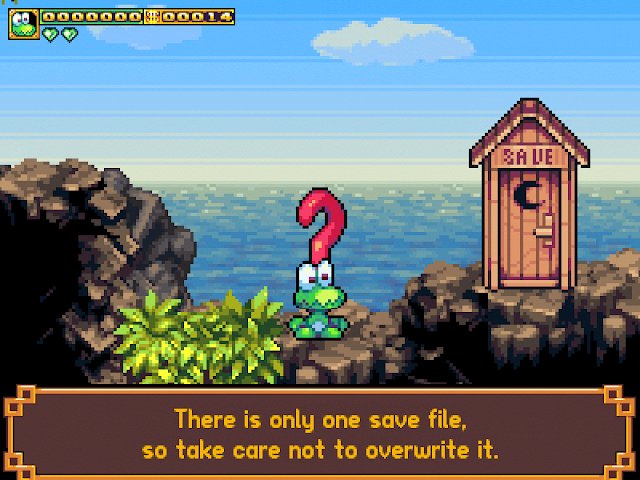 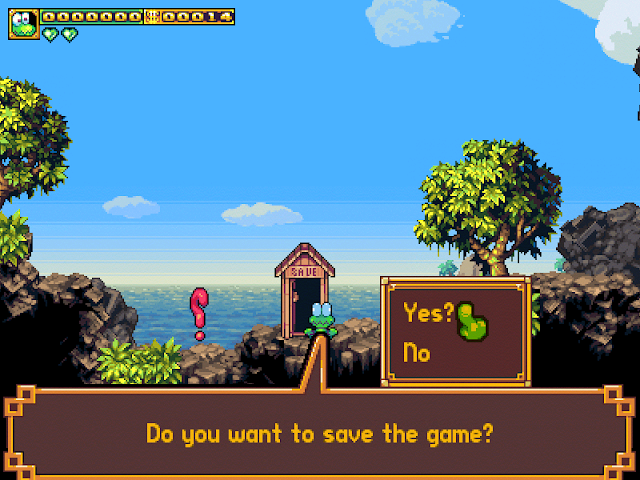 So next I moved into the game proper, and the graphics are very well done and the game draws you into the story quite well.  There is a fair degree of Mario Bros style gameplay in this game, which is familiar and makes the game easy to get into: 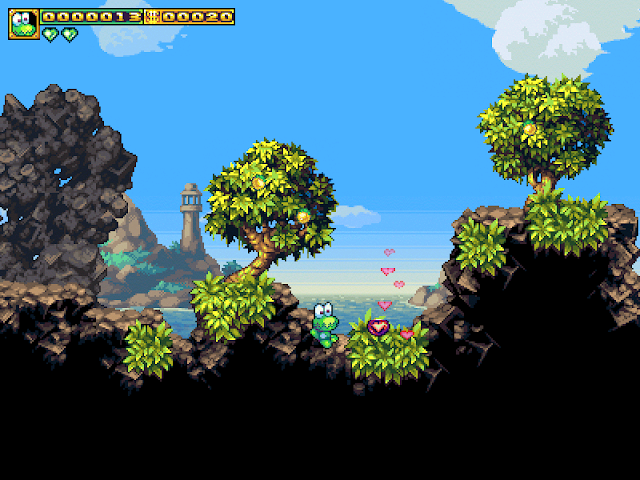 Health needs to be watched carefully, as it is quickly eroded by encounters with enemies - not all can be killed: 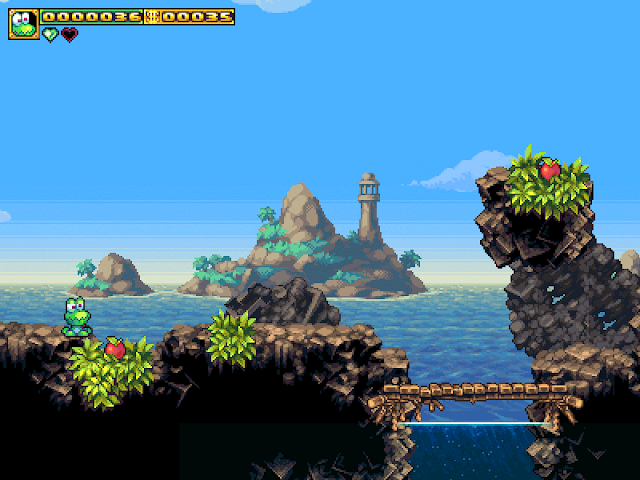 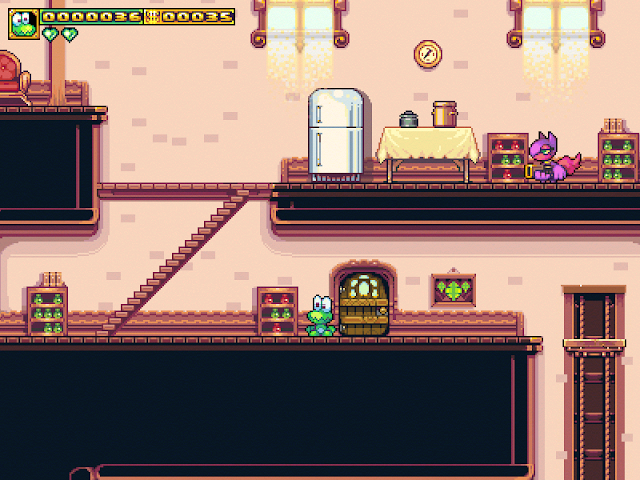 An invitation for some cake - how can I refuse that? :-) 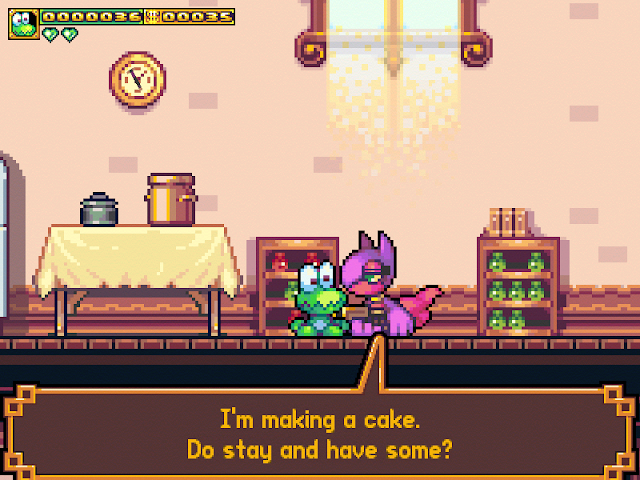 Next, I needed to find a key to open the door shown below. I collected the key with Frogatto's tongue and can use it to unlock the door to the next level: 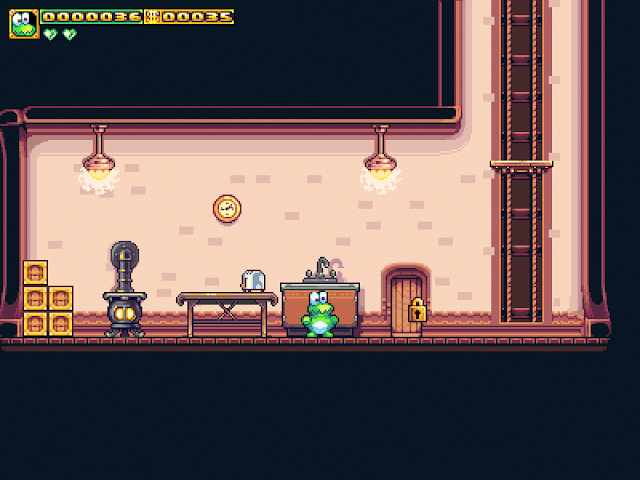 A bit deeper into the game, and treasures abound.... 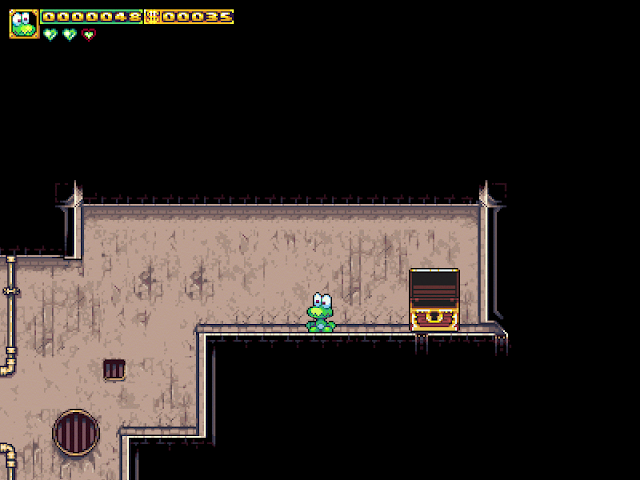 The outside scenes in the game are fantastic - very colourful and interesting to explore: 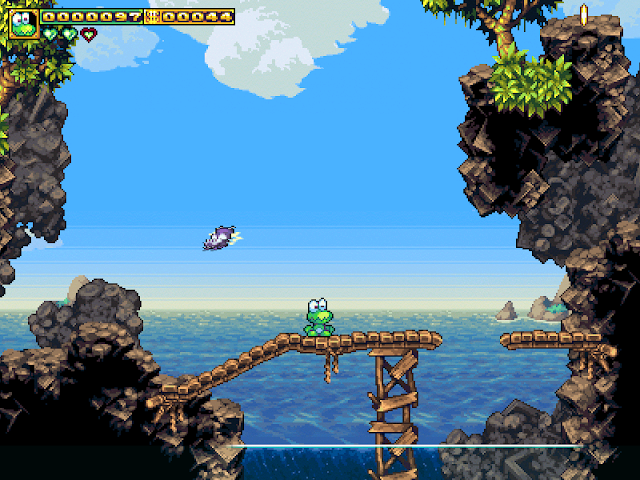 Reached another Save game point! 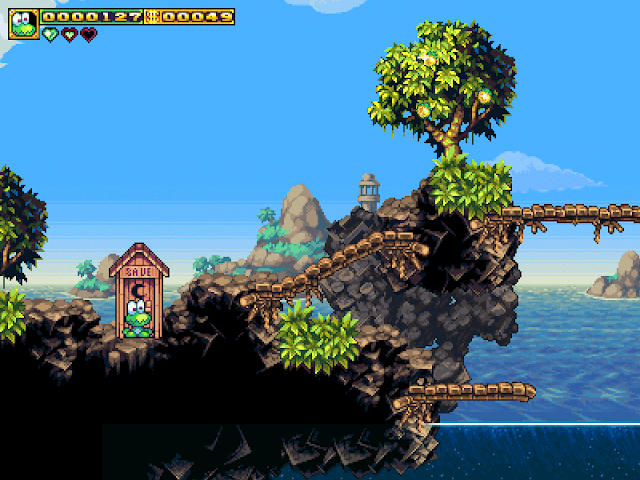 Below I have reached the secluded Hut level, with plenty more still to explore: 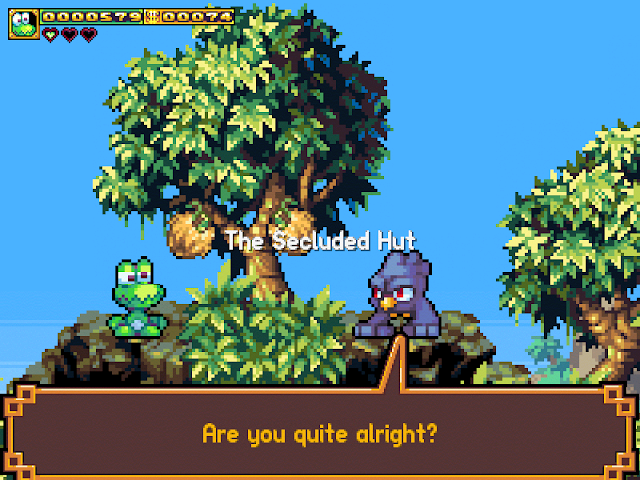 Having spent a bit of time playing this game, I have to say I was pleasantly surprised how enjoyable it was to play. The game runs well, no slowdowns noticed, and the music changes frequently and is nice enough to leave running in the background while playing.

I recommend giving Frogatto a go!