It was with a lot of excitement that I keenly fired up my X1000 today to download the recently released HD Audio driver for the X1000.

So why the interest in the new X1000 audio driver? Well, the X1000 comes delivered with an internal Audio card on the motherboard supporting 7.1 channel audio, but until today it didn't work with the AmigaOS4.1 audio drivers. The reason for this is because the older AmigaOS4.1 drivers is for audio cards based on the old AC97 Audio card standard.

The Audio card built into the X1000 uses the newer HDAudio standard, which requires it's own driver, and this wasn't available at the time of the X1000's release.

Since A-Eon was obviously keen to get the X1000 out there asap, the decision was made to release it without HDAudio support and include a PCI audio card based on the AC97 standard that the AmigaOS4.1 audio drivers could use. The intention was to release the HDAudio driver "at a later time".

I haven't used the X1000 for a bit due to a problem with the network card which meant it no longer worked on boot up meaning no internet access - I lost motivation while trying unsuccessfully to troubleshoot it and left it for a while.

I fixed it today - obviously I needed to fix it to be able to download the new HD Audio drivers via AmiUpdate!

Essentially the problem I had boiled down to the PCI network card included with the X1000 had failed. The included PCI network card is a RTL8139 PCI card. By a total piece of luck, while strolling through a swap meet recently, I found a box of "miscellaneous computer stuff" for 5 dollars. There was a lot of older PCI network cards, PCMCIA cards, graphics cards and more besides! Great get!

In that box I found a RTL8139 PCI network card! I removed the non-working RTL8139 card in the X1000 and slotted this new one into the X1000 and presto - all fixed! I suppose I could go back to AmigaKit and get a new PCI card - maybe I will in due course. But for now, I can move on!

So next I ran AmiUpdate to update the HDAudio driver. Turned out there was a few other things to update as well since I last fired up the X1000: 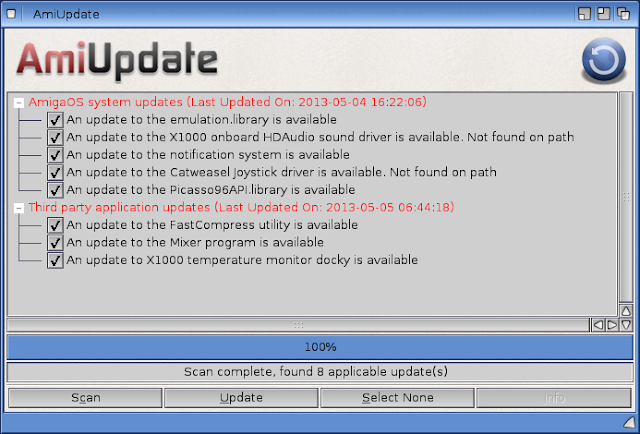 I clicked on update and it churned away and installed everything. After this I powered down the X1000 and removed the PCI sound card and plugged my speakers into the onboard audio connectors on the X1000 for the first time ever!

On bootup I got the AmigaOS4.1 welcome sound through the onboard audio card!

Next I took a look at AHI to see the new driver in operation, as below (Click to expand):

Playing a test sound through here doesn't seem to work, which is odd as audio works fine. If I select Music Unit instead, the test sound works....not sure why that is but it does work.

The other thing I noticed is that the Mixer application cannot see the onboard audio card, and comes up with an error saying "No cards found". This is a third party application, so I guess it just needs to be updated to see the new audio driver. I have confirmed from Hyperion that Mixer doesn't work with the new Audio driver at all. If you have it running in your startup-sequence or user-startup, make sure you remove it before you reboot your X1000.

The developer of the HD Audio driver mentioned that the audio input jack, and SPDIF (Digital) out ports are not functional as yet in this release, but the driver is a work in progress with these to be added later on.

I then fired up TuneNet and audio plays back perfectly. I also tried playing some OS4 games - AmiBoing's TapJewels and also 1941 Extreme 2.0, and the audio was flawless.

I ran AmiCygnix and played back some audio via Audacious and again, the new audio drivers works well here too.

Next I checked the Emulated Amiga games and Amiga 2000 system and audio worked, but I noted a lot of audio break up. The audio breakup it is very bad in emulated games and demos in my testing. Since I know the X1000 can run AC97 audio card with no breakup in games and demos, I am not sure if I need to tweak audio settings in RunInUAE to get this working. Will take a look at this soon as I can, as I need this to work well. Anyone else seen this issue?

For me, despite some issues, I am very happy that the onboard audio works on the X1000 finally. I have now removed the PCI-e to PCI bridgeboard card I installed from the X1000 as I no longer need it with the removal of the PCI audio card from the computer.

Thanks to A-Eon for releasing the HDAudio driver for X1000 owners. I look forward to future fixing up some of the other non-working functionality, but for now I am happy to have onboard audio out working on the X1000!