I was reading on www.amigans.net forum the other day and discovered an interesting thread on a BETA version of DOpus 5.9 Magellan II for AmigaOS4. Even though it is still in beta, I just had to try this out on my X1000!

DOpus 5.82 Magellan II (Directory Opus) was originally released on the Classic AmigaOS 3.1 back in the late 1990's by Australian developers GP Soft. I bought it back then and used it extensively on my A1200 and later my A4000.

It was subsequently updated to support AmigaOS3.5 (and 3.9) icon changes, which was really needed when I migrated to AmigaOS3.9.

Since then it hasn't been updated on Classic Amiga as the GP Soft team left the Amiga market and moved Directory Opus to Windows in the early 2000's - I still run Directory Opus (now version 10) on my Windows 7 PC today too. It has changed a lot since then, as you can see below (click to expand)... 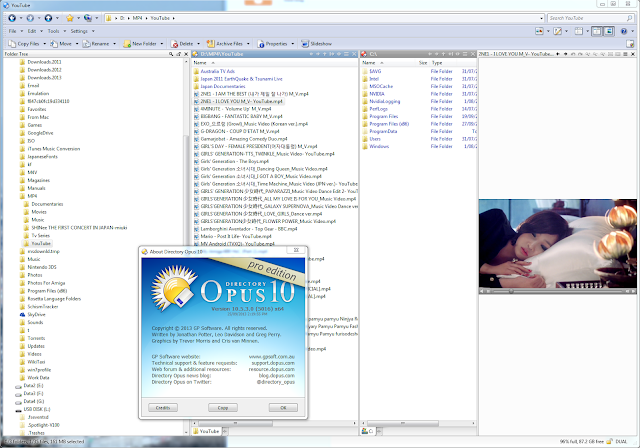 An older version of DOpus (Version 4) was open sourced by GP Soft and an AmigaOS4 port was quickly done in the 2000's.

However the last DOpus 5.82 Magellan II version for Classic Amiga was never ported to AmigaOS4 as it was not Open source software, until very recently.

Thanks to the efforts of Kas1e and testers, we now have the first BETA version of DOpus 5.9 Magellan II for AmigaOS4 in 2013!

I should stress that this software is BETA and as such is not finished as yet, but you can already use quite a bit of the functionality so let's take a look.

After downloading the archive, I extracted it to System:Utilities, and you get the folder below: 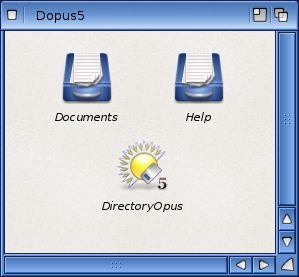 Launching Directory Opus 5.9 for the first time you are greeted with a separate Workbench screen, which uses the default Workbench 3.1 Topaz font (click to expand).... 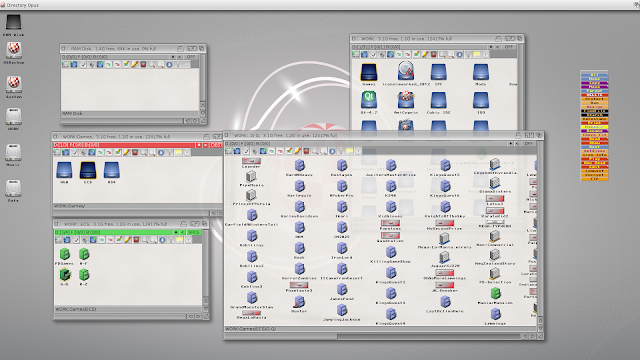 As with the original DOpus 5.9, you can view via icons or text listers, and everything is customisable, one of the key features of Dopus. So first things first - get rid of the ghastly topaz font, and get it using my dual display setup..

To change this, Right click on the top of the DOpus 5.9 screen and highlight the Settings Menu and then select the Environment... option. Then first change the fonts under Lister Display section below from Topaz to the standard AmigaOS 4 font (Bitstream Vera Sans Font) and increase the font size to 14 so it is readable on the high resolution screen on the X1000: 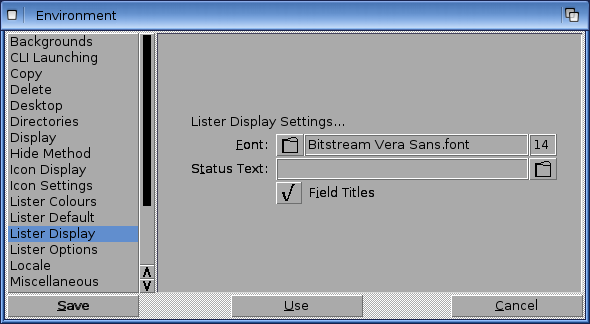 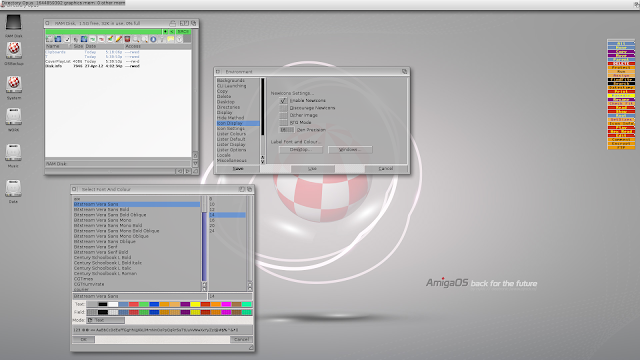 Next I changed the screen it uses from a clone of the Workbench screen to use the Dual Display Radeon 9250 video card on my X1000. This is accessible under the Display option in the Environment settings. Once again, we need to change the default font to display the AmigaOS 4 font instead of the default Topaz font in the same Display section: 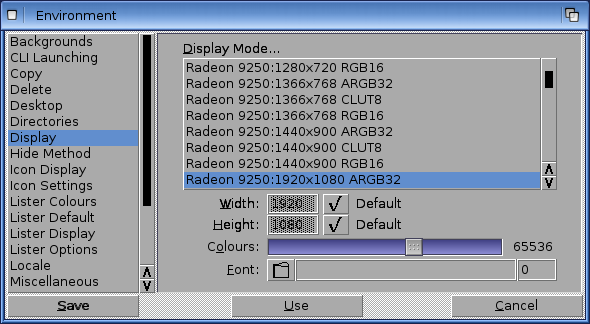 Now DOpus 5.9 is up on the Dual Display setup on the X1000 using the correct fonts I think it looks pretty good (click to expand): 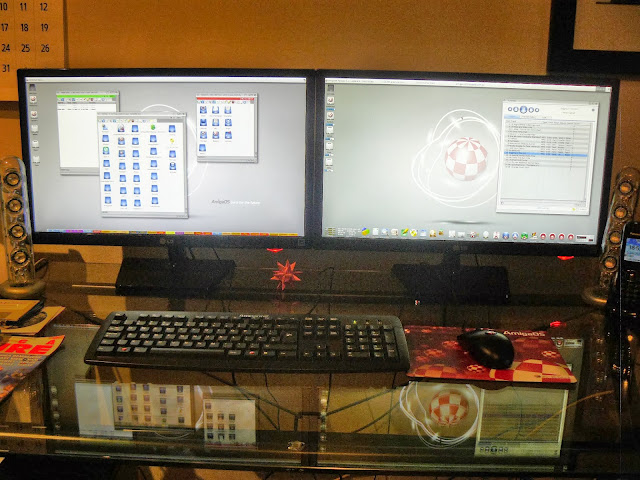 It is certainly great to have Dopus 5.9 Magellan II on AmigaOS4, very nostalgic and will add some good functionality to AmigaOS4 when finished! Perhaps once finished it can be included as a Workbench replacement mode selectable in AmigaOS 4.2? :-)

By the way I am aware that DOpus 5.9 can be set to be used in Workbench replacement mode, but given the BETA nature of it right now, and the known conflict of the shift key to select between DOPus and Workbench on bootup and the native shift bypass startup programs in AmigaOS4,  I think it is best to wait for now until this can be fixed up. Besides, at the moment I prefer the flexibility of using Dual displays for DOpus!

Below is some more screenshots of DOpus 5.9 in action - first showing the default lister text view, with source and destination folder highlighted in green and red respectively (all customisable). You can also see the button list at the bottom of commonly used functions like copy, delete, all files, none, etc, which are within easy reach. This button lister can be customised to be vertical or horizontal, rectangle, etc (click to expand): 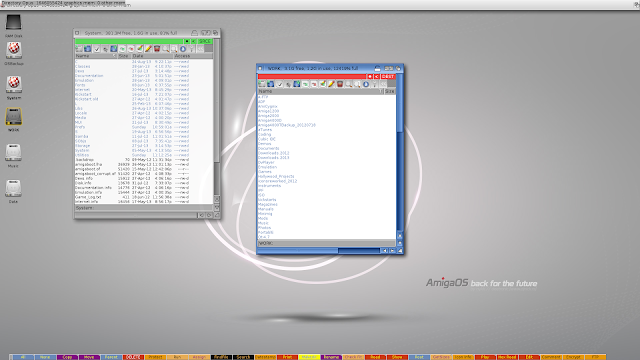 You can see below the various icons in each window to create folders, show devices, delete file(s), edit and more besides. In addition, you can click on the < icon in the green bar at the top to go back a folder and the down arrow gives options to copy/move/delete files, amongst other things: 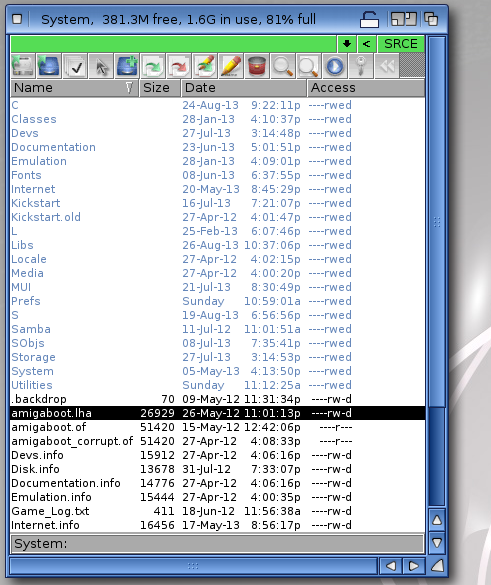 You can easily change the listers to icon and action view by right clicking on the lister (or from the Lister menu at the top of the screen) and selecting this appropriate option under View As. In this mode AmigaOS4 Icons render well in Dopus 5.9, and the old Newicon, MagicWB icons also display well: 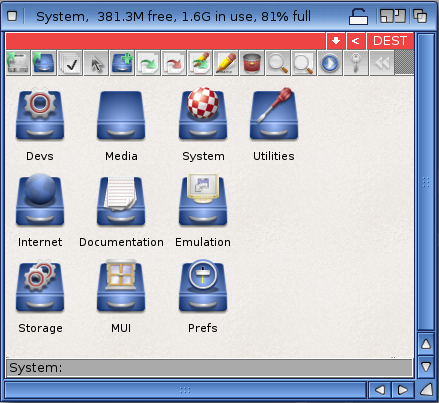 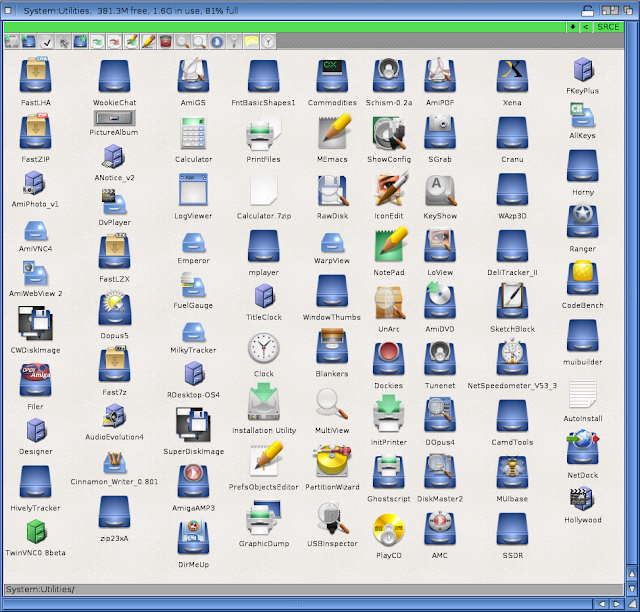 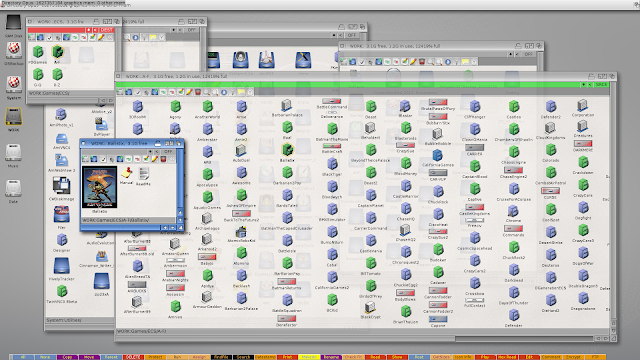 Double clicking on files uses the DOpus defaults as defined in the configuration - in this case below it uses Multiview to display an image - under AmigaOS4 I have set this to be LoView so as you can see DOpus is very customisable. I also have Schismtracker, Notepad and Cinnamon Writer running on the DOpus screen (click to expand): 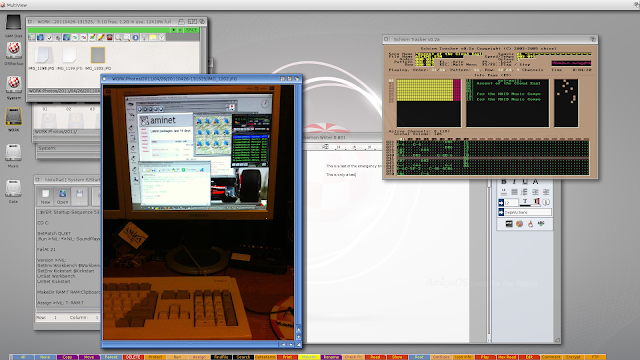 There are still some known bugs, like not displaying the drive sizes correctly for drives over 4GB (a carryover from AmigaOS 3.1 drive size restrictions), Title bar text overlays the AmigaOS4 screen title bar, and the Menu focus seems to have some trouble from time to time between screens (sometimes when on AmigaOS4 screen can right click but no menus come up when highlighted).

Note 7/10: Several people pointed out that FTP is actually working in Dopus 5.9, my sincere apologies for the error.

There are nightly builds of DOpus 5.9 being released at the moment and a lot of work being done on it so I expect these issues will be resolved soon, and I look forward to having the final version! In the meantime it is great to be able to play with the BETA version of DOpus 5.9 Magellan II, and it is a great addition to AmigaOS4 applications on the X1000!