My CDTV has arrived!

This week I was glad to receive my Commodore CDTV in the post. I have never owned a CDTV so I was keen to get one - when the opportunity came I wasn't going to miss it! 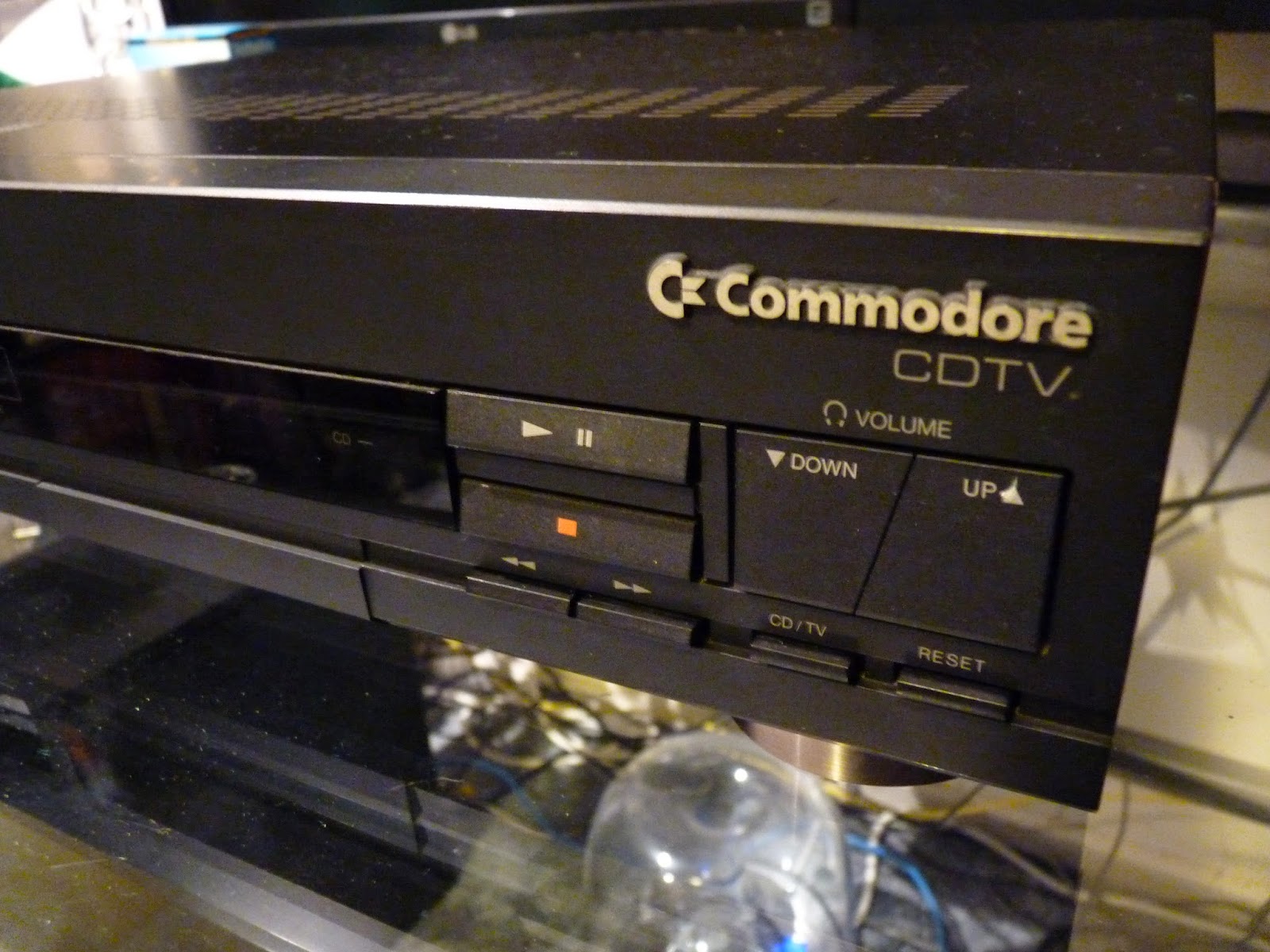 I remember when I first saw a CDTV back when they were still for sale in the early 1990's, and all I could think was how cool does that look, it looks like a hifi component...and it uses CD's for games, played videos and "multimedia" stuff....and then I saw the price and my heart sank - I knew I could never afford it.
My local Amiga dealer in Perth had a CDTV on display and available to copy fish disks from CD onto floppy disk for free (if you bought the blank disks from them of course). I used to use this service quite a bit to get free software to play with on my family's Amiga 500. The CDTV (like the Amiga 500) ran Workbench 1.3, with an additional CDTV firmware ROM included.
Ultimately my Dad was not interested in it at all and bought the Amiga 2000HD in 1991 instead, which I am glad he did as it offered a lot more features! I bought the A2000 from him when he upgraded to a PC and I still have that A2000 to this day.
I guess a lot of people felt the same way as my Dad about the CDTV because it sold poorly from it's introduction in late 1991. Commodore reinstated Amiga branding to the CDTV, since it was really an Amiga 500 with a CD drive. They then added a keyboard and external drive so you could boot the large selection of Amiga disk based games available (rather than the very small CD selection available).
Unfortunately most people still didn't see the benefit, and kept their Amiga 500 computers and just bought the 100% compatible A570 CD drive addon instead, which let them play all CDTV games on the Amiga 500.
Commodore stopped selling it when the CD32 console came out in 1993.
I still thought it looked cool though, and part of me always wanted to get one eventually.
Fast forward to 2014 and the opportunity came along recentl when an Australian CDTV was for sale on Ebay - I wasn't going to miss out. There was some heavy bidding but I won it, and here it is, fresh out of the box this week: 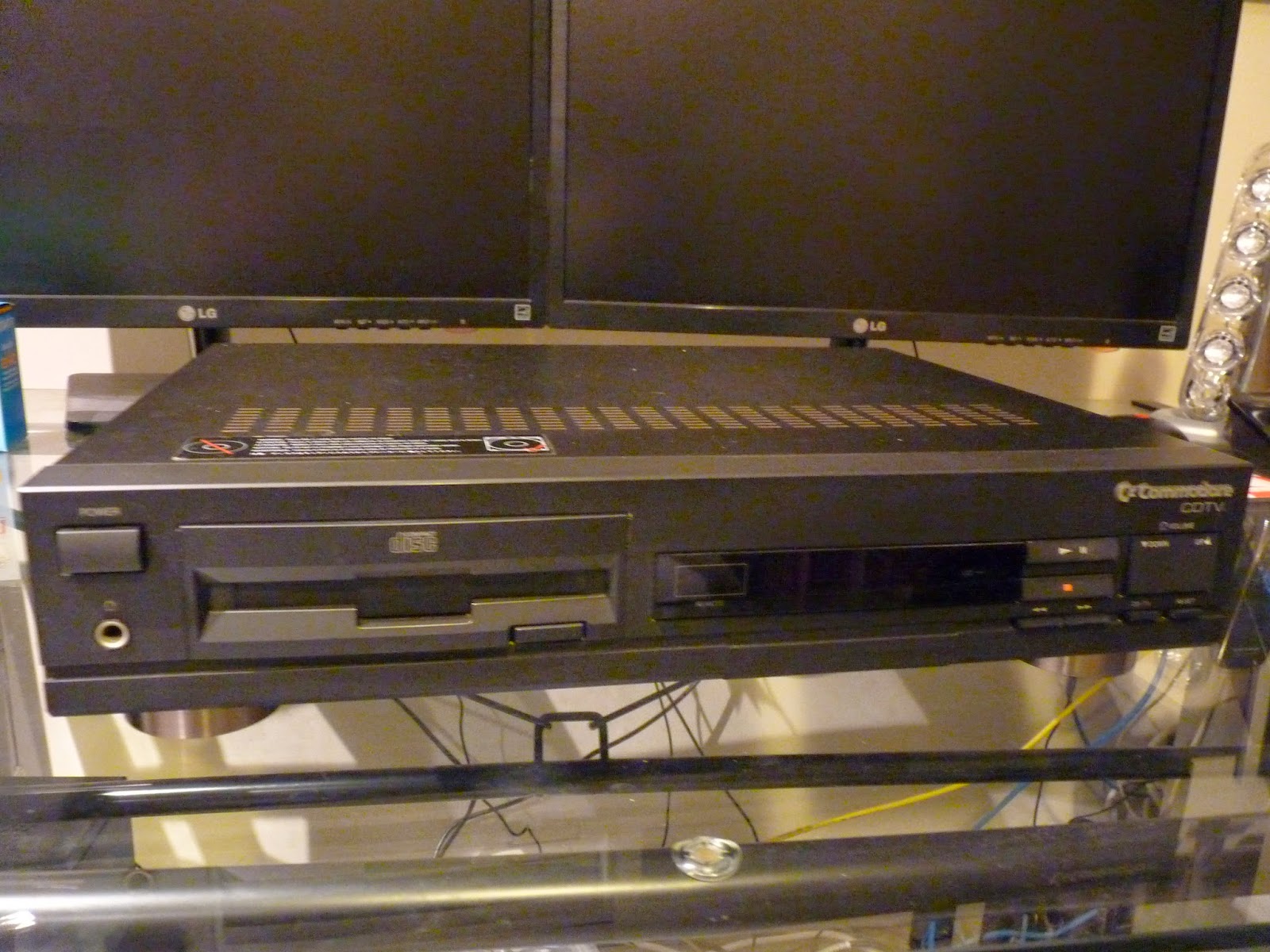 There is a memory card slot hidden in the front bezel, but it is very rare and expensive to get memory cards for it.

Back in the days when this was released, CD drives in computers didn't have a tray - instead they had a CD caddy case you put the CD into, and then insert the caddy into the CD drive. This is why there is a big warning sticker on the top reminding owners not to insert CD's into it without a caddy: 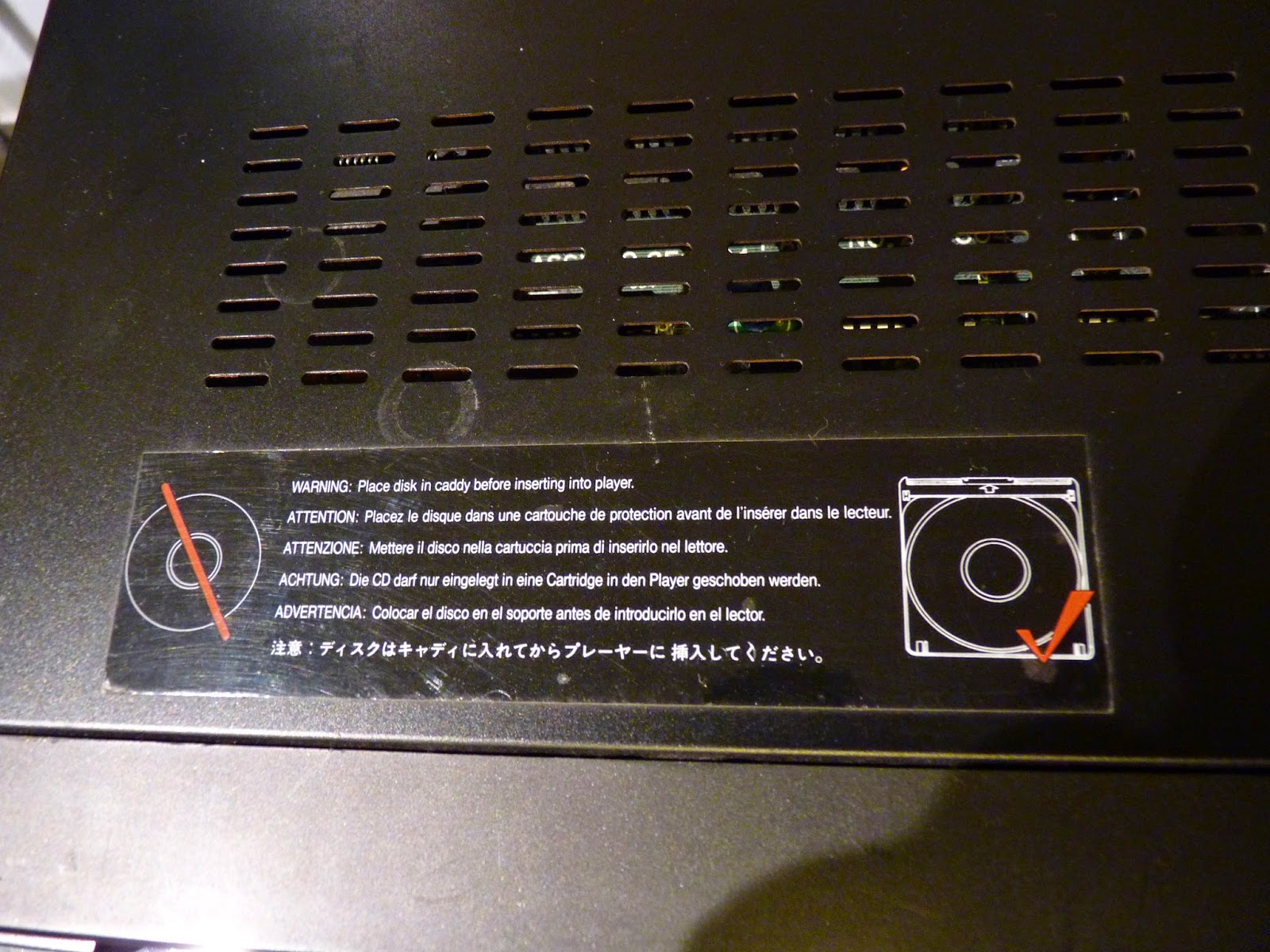 Here is the view of the rear of the case: 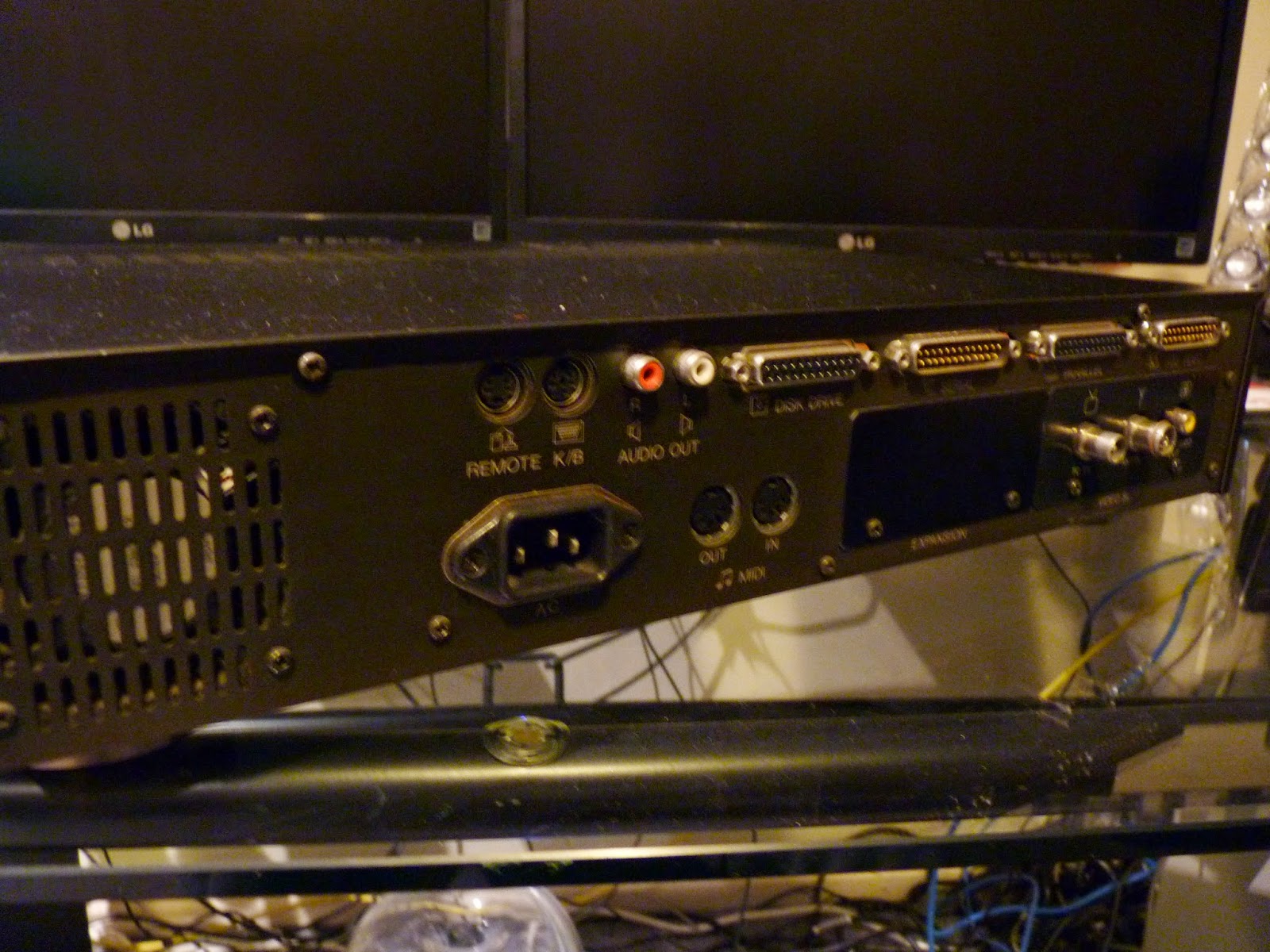 The usual Amiga 500 ports are there - RGB port, Parallel, Serial, Disk Drive, Audio Out, but also some CDTV specific ports too. RF TV Out, RF Antenna In, Component out ports - an expansion bay also exists for genlock expansion card too: 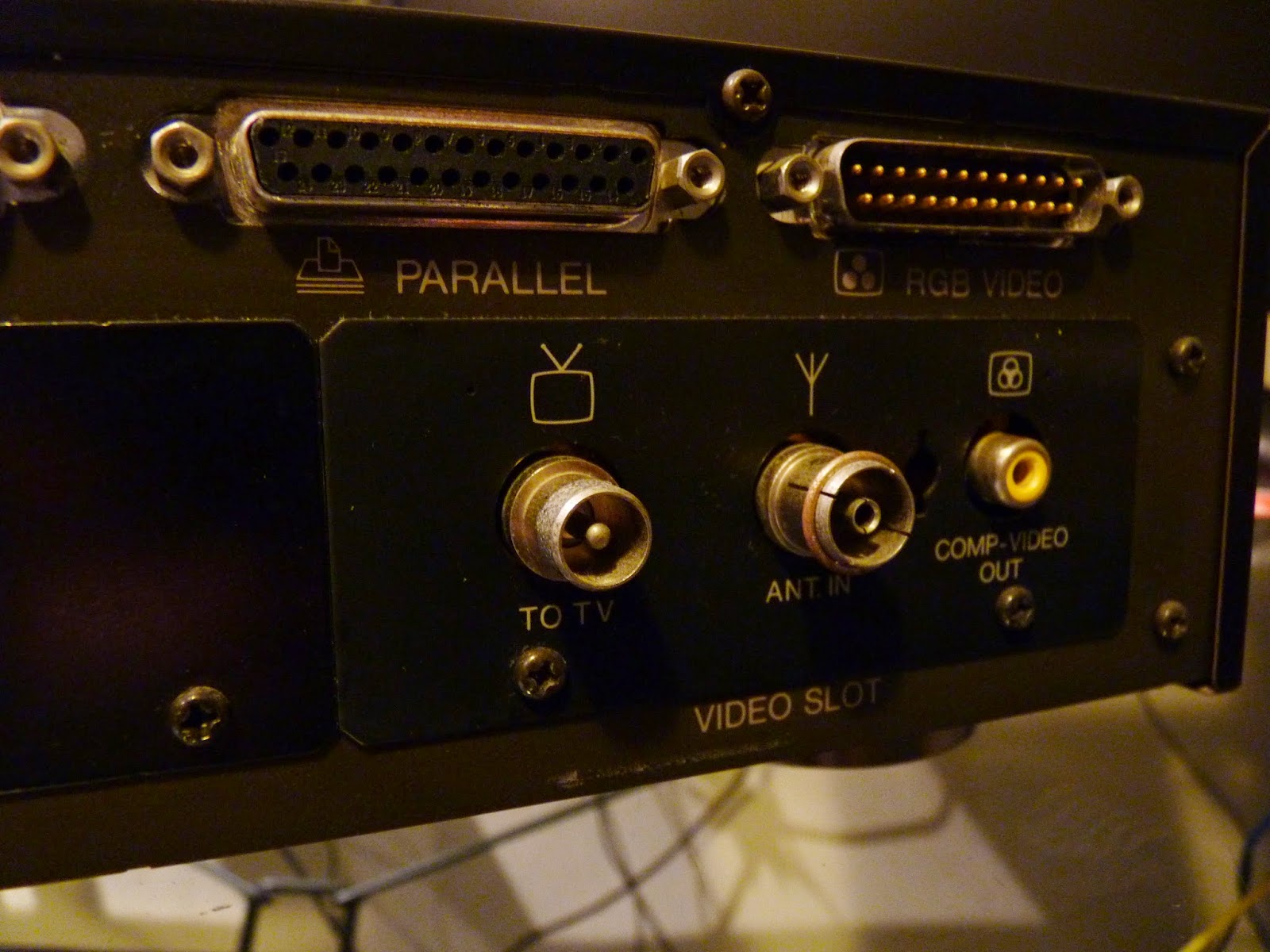 Keyboard and Remote ports are different too - the CDTV uses an A4000D spec keyboard port connector, while the remote sensor mouse port requires an optional remote sensor (which I don't have). You can control the mouse from the infra red controller included. Also interesting is the MIDI in and out ports, the only time an Amiga ever had these built in! 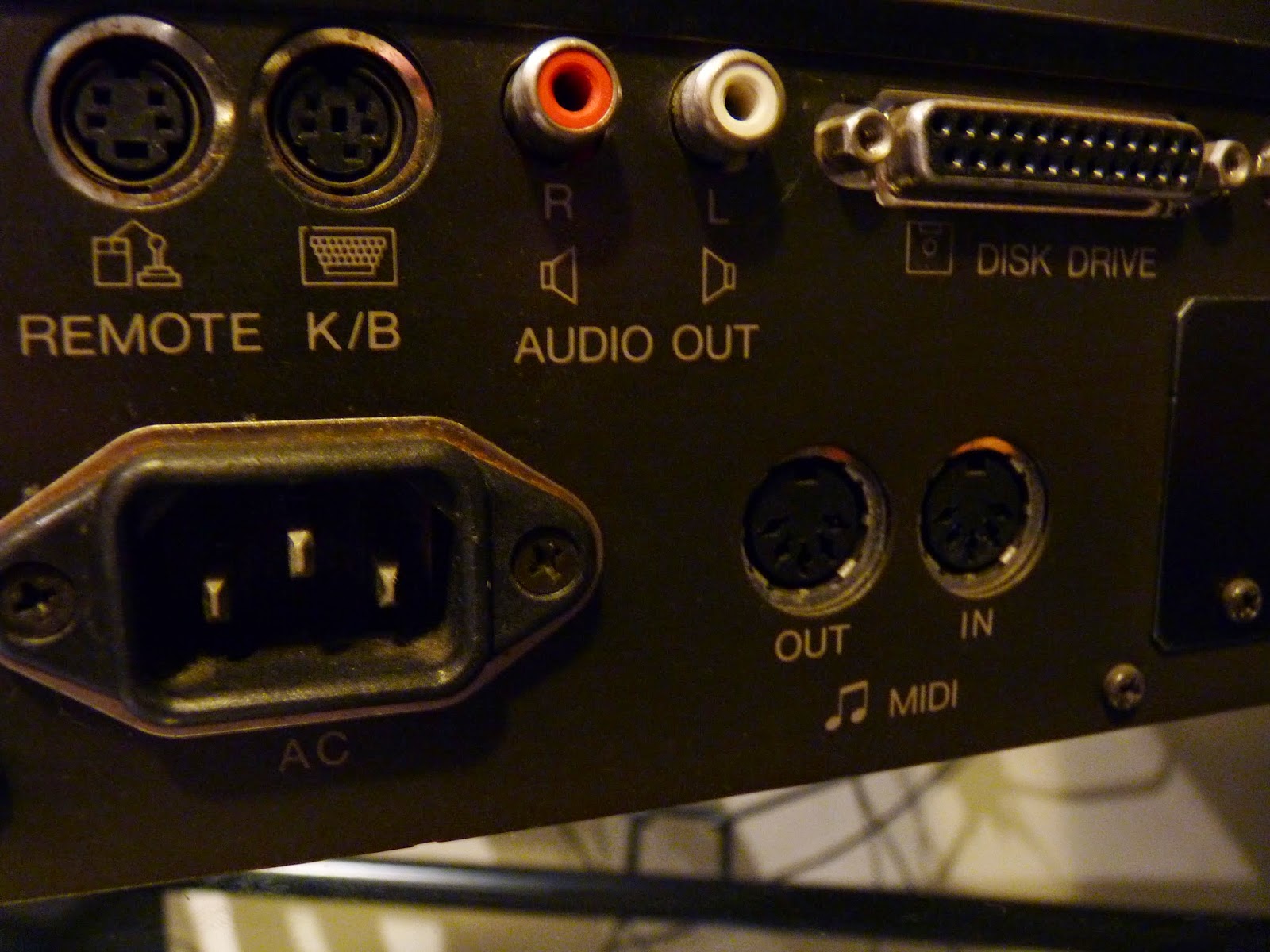 I used to use a parallel port MIDI connector box (which I still have), to connect to a Roland Piano with the Amiga Format freebie Sequencer One software on the A2000.

I then hooked up the CDTV to my TFT monitor using my external DCE scandoubler I use for my Amiga equipment from time to time, and after power on I am greeted with the CDTV boot screen logo, waiting for a CD to proceed: 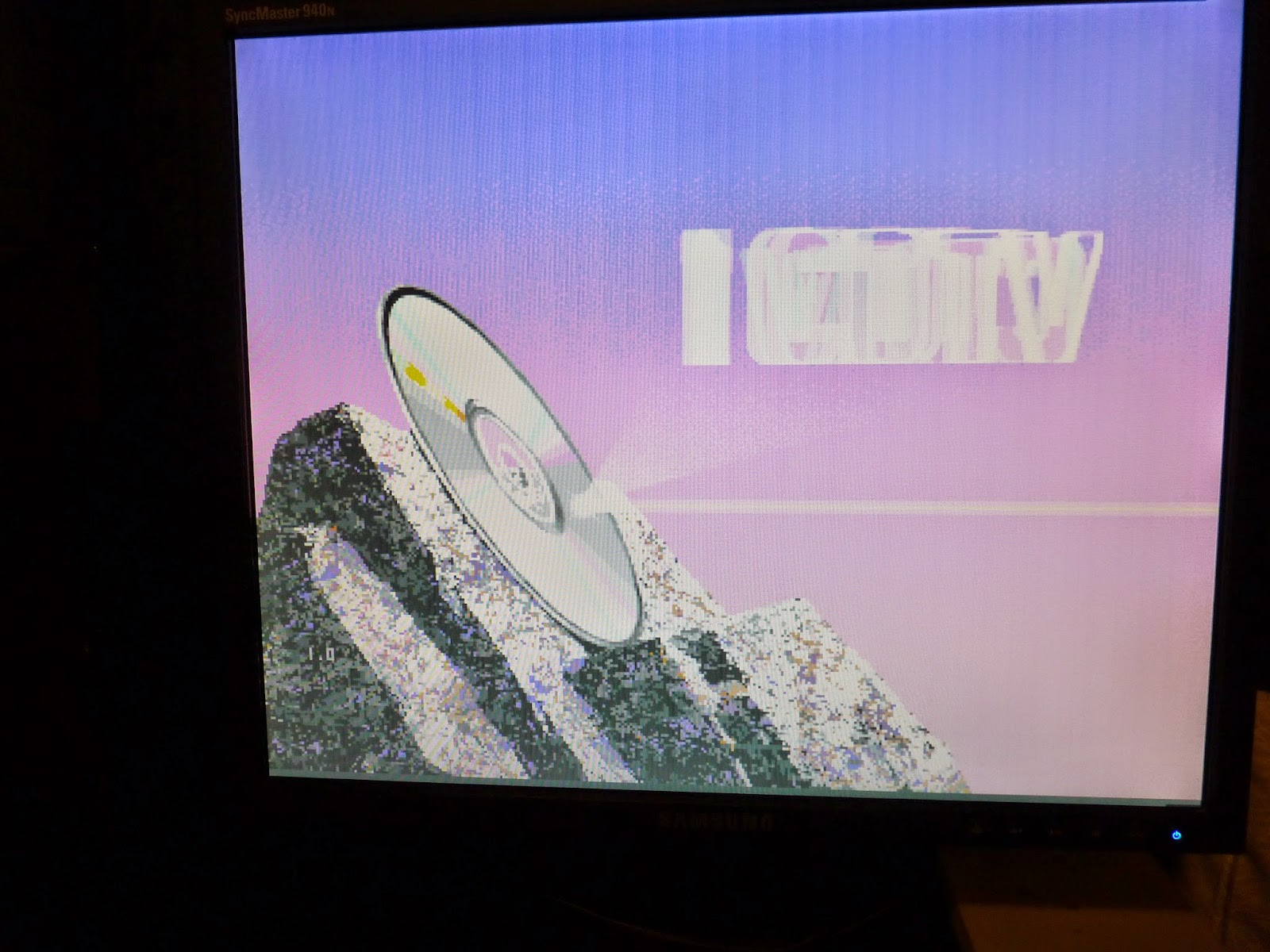 Close up of the front display, showing the current time and volume level: 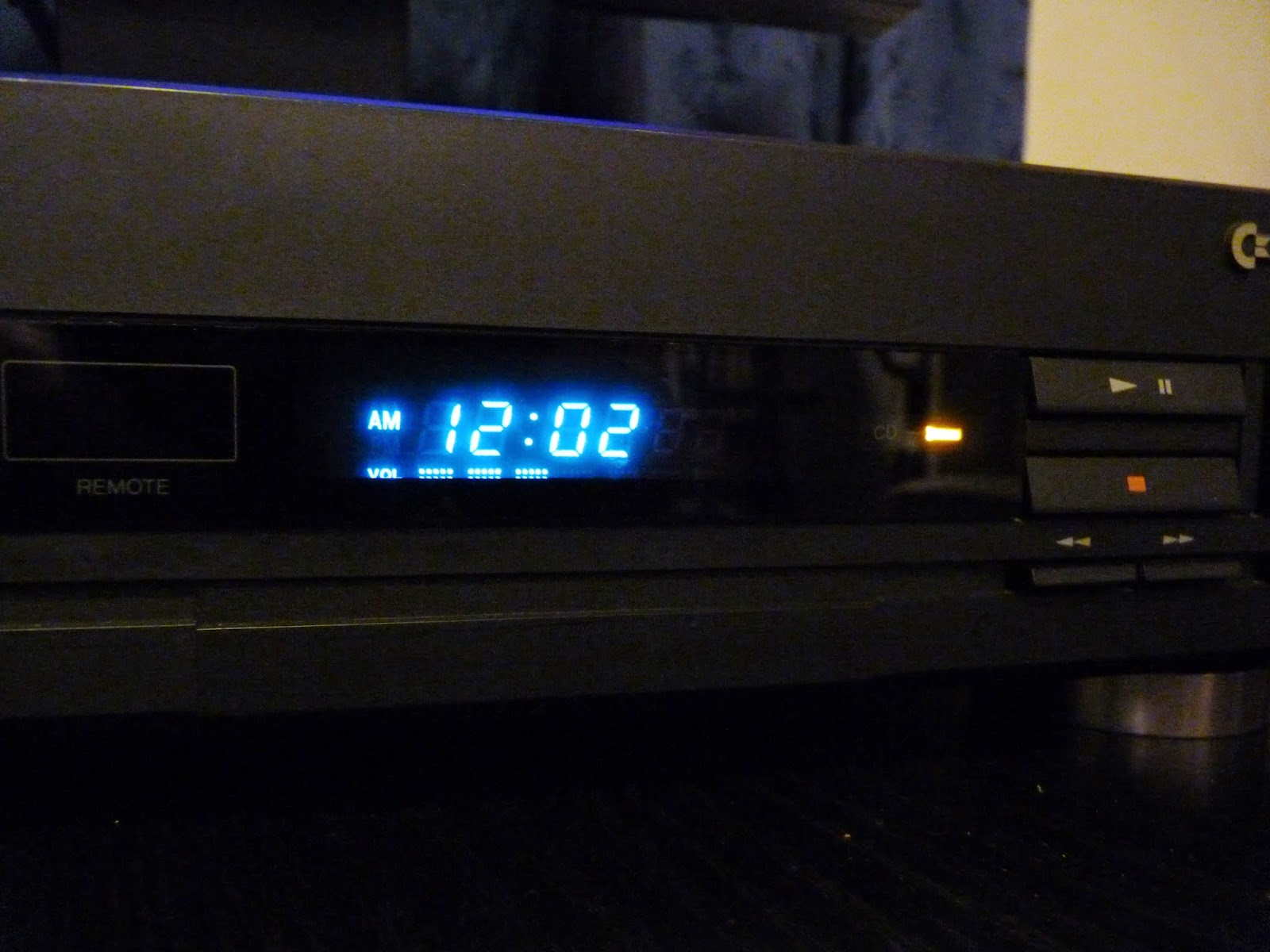 Another view showing the CD Drive, which has an eject button similar to an Amiga floppy drive. Speaking of which, you can also make out an external Amiga floppy drive I have connected to the CDTV to try out Amiga game and demo disks: 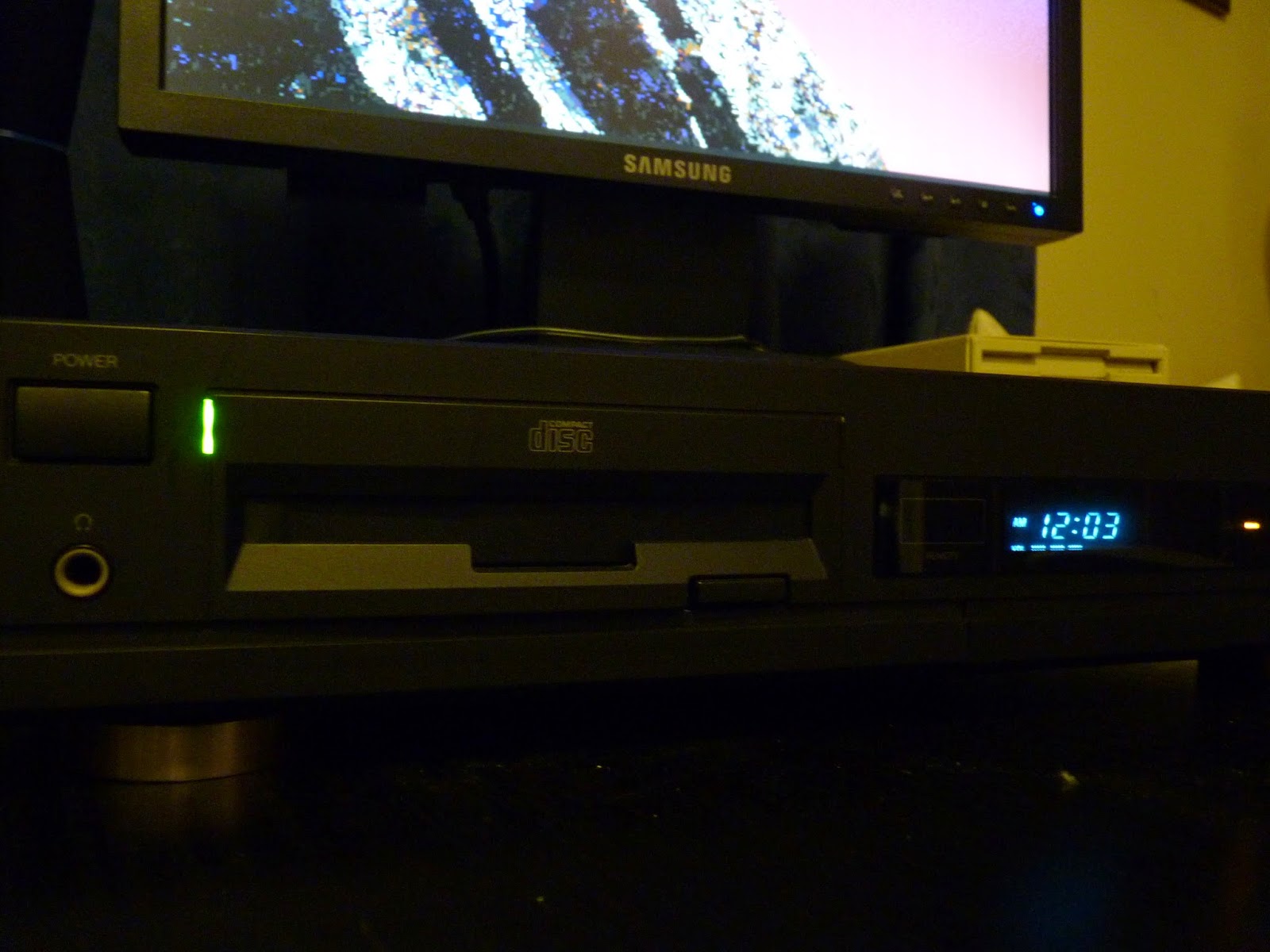 For the first CD to try, I though an audio CD would be good - I picked Immortal 3, which contains many Amiga game music songs remixed with real instruments. This gives me a chance to use the CD Player interface on the CDTV, and also listen to some Amiga originated music. Here it is, loaded into the CD Caddy ready to go: 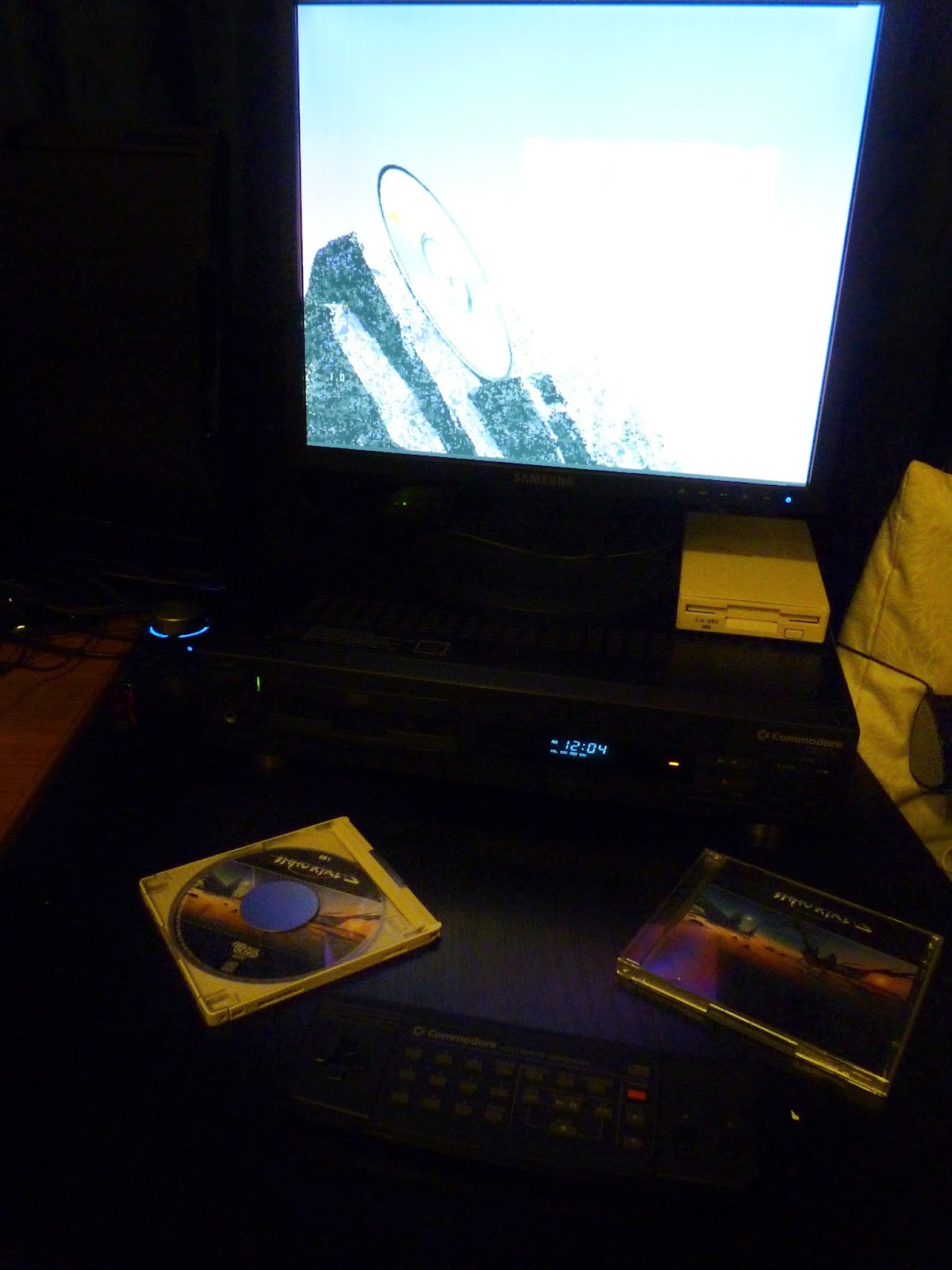 As you can see, it has quite a few functions contained on the controller, included a volume control for headphone use, Audio CD control functions, Genlock mode, Joy/Mouse button - which allows the controller to switch between being a joystick or a mouse, depending on what you are using on the CDTV.

On the other controller I already had, the joy/mouse button was a physical switch on the controller, with the power button switched with it's original position, as below: 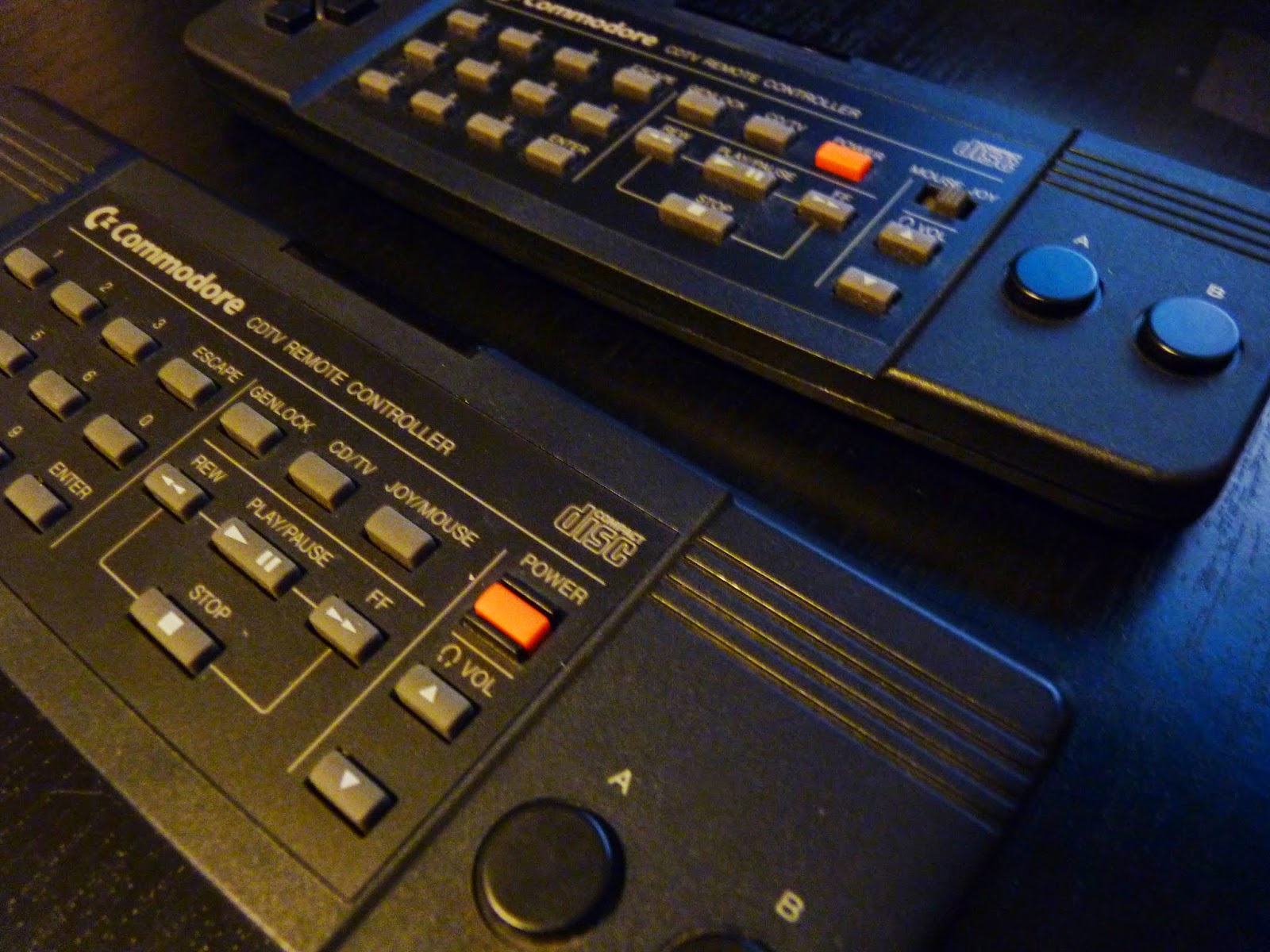 I imagine on the joy/mouse switch version, it was very easy to accidently power the CDTV unit off. Makes sense why they moved it and made the power button recessed to avoid accidental power offs...

The back of the controller says Made in Japan. Nice, it's been a while since I have seen something electronic made in Japan, rather than the usual China, Taiwan, Indonesia or Malaysia. The CDTV unit itself is made in Japan too: 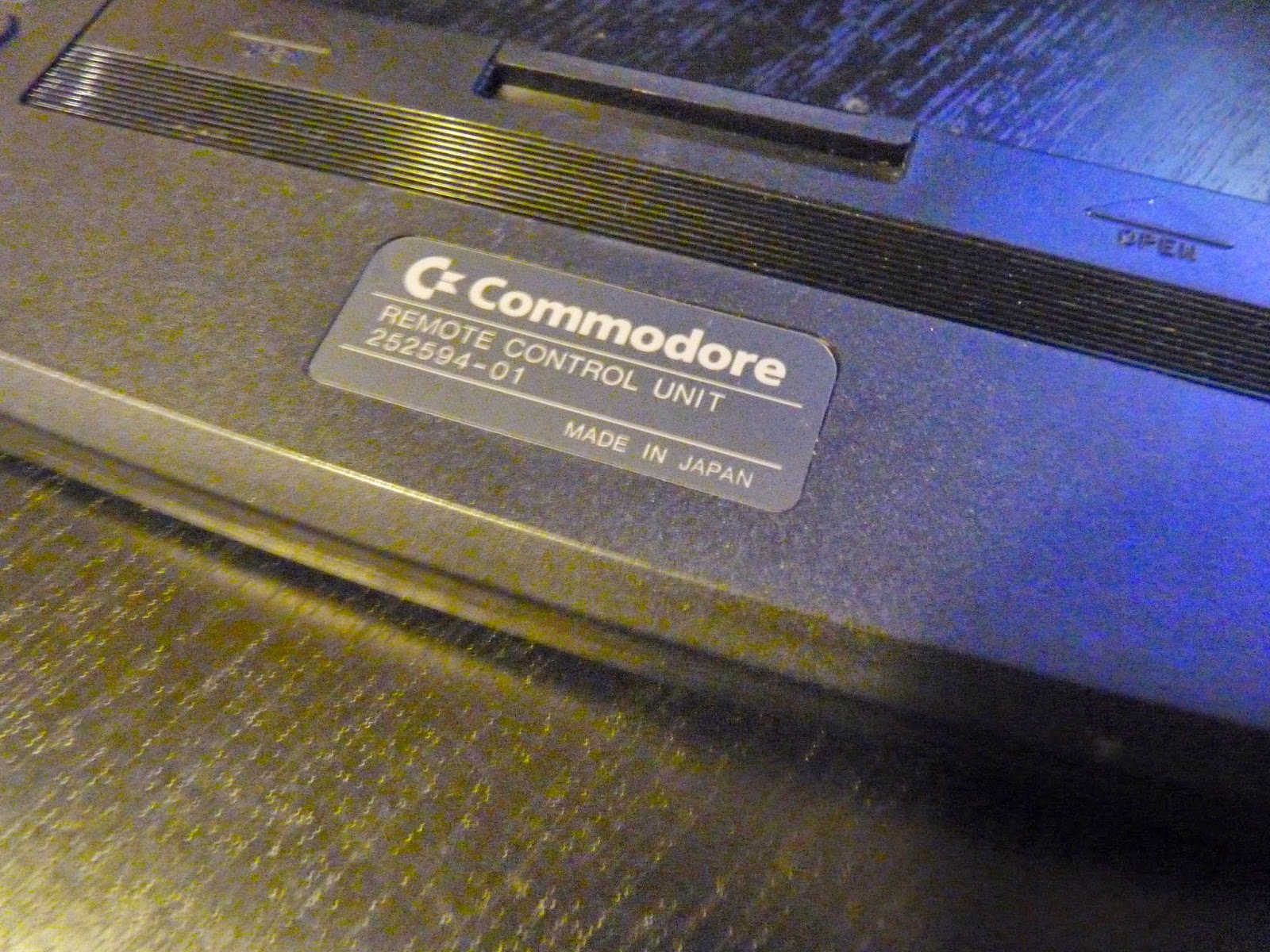 Here is the CD caddy, Immortal 3 CD in place, half inserted into the CDTV: 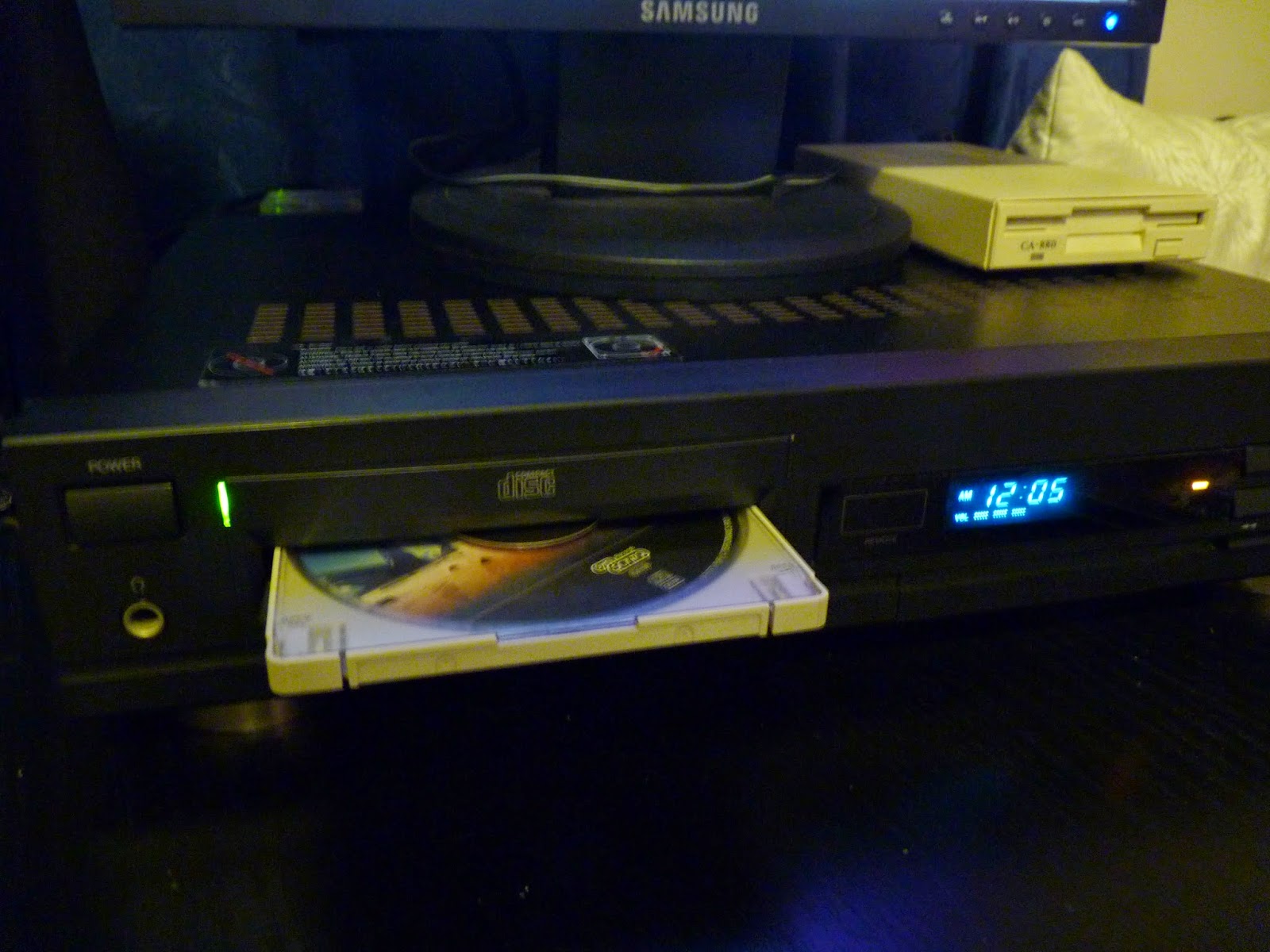 After inserting, the Audio CD interface quickly appears. I remember when I first saw this interface back in the 1990's and thinking how advanced it was: 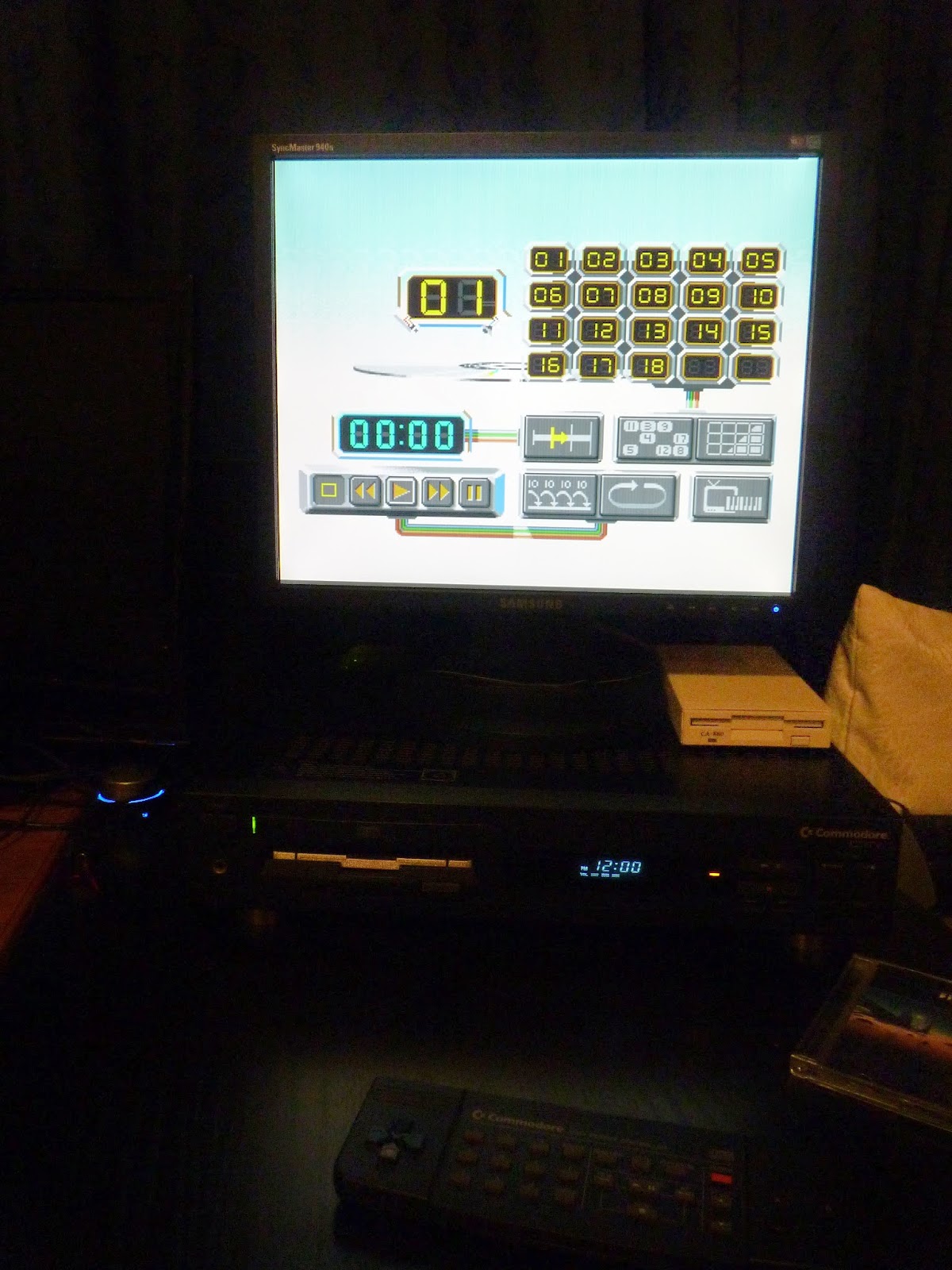 The usual Audio CD control options are present, controllable using the directional buttons on the controller, or just use the play/pause/fast forward/rewind buttons: 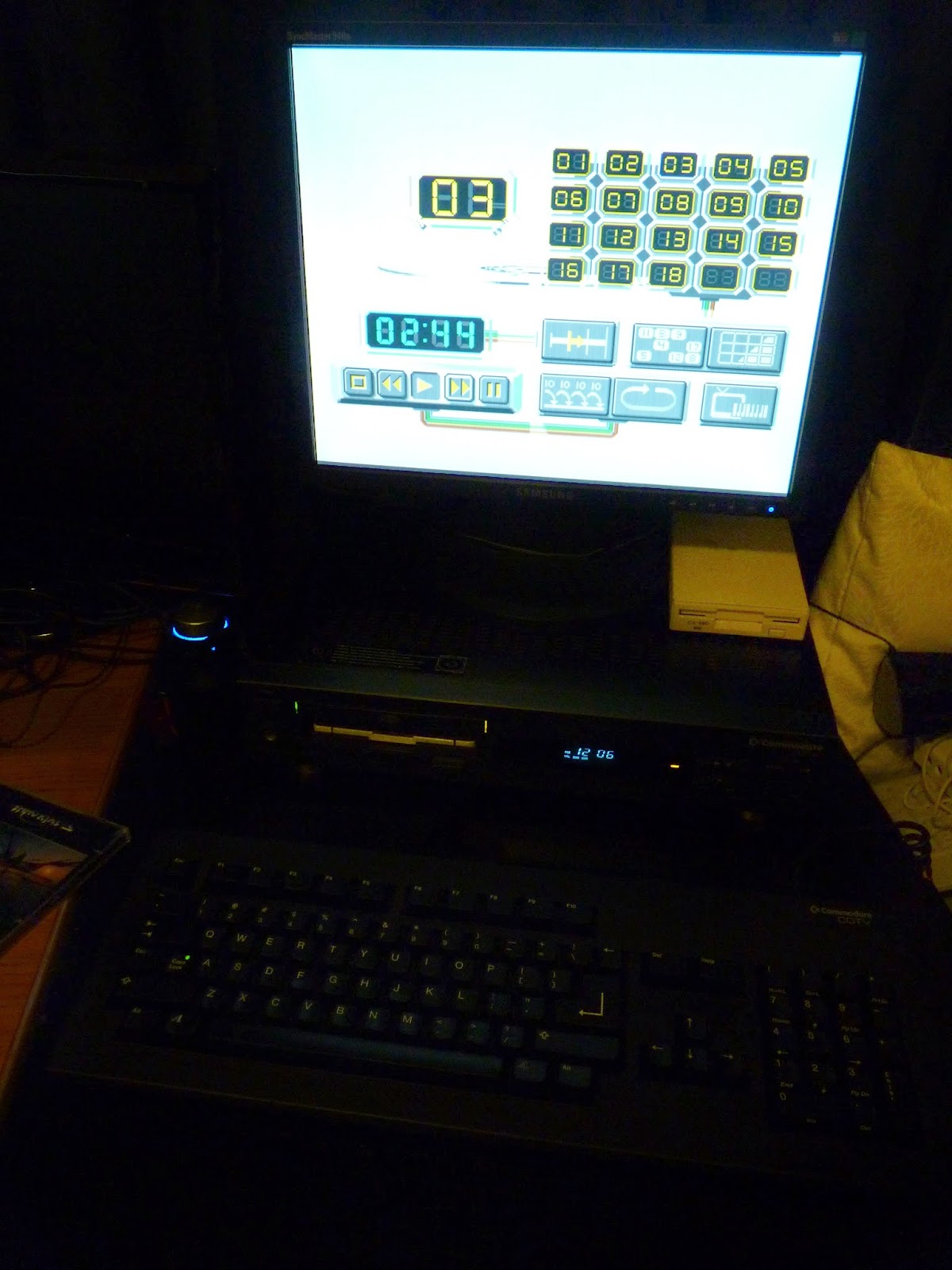 I was kicking back, relaxing to the nice tunes on Immortal 3 while burning off some CDTV CD's to try out. The CD Player screen changes after a few minutes to a rotating and moving CDTV logo to prevent screen burn-in - nice touch.

With the initial batch of CD burning completed, the first CD I wanted to try (having seen it on YouTube) is the Psygnosis Demo CD. It includes playback of the various intro fancy animations Psygnosis produced for many of their Amiga games in the 1990-1991 period: 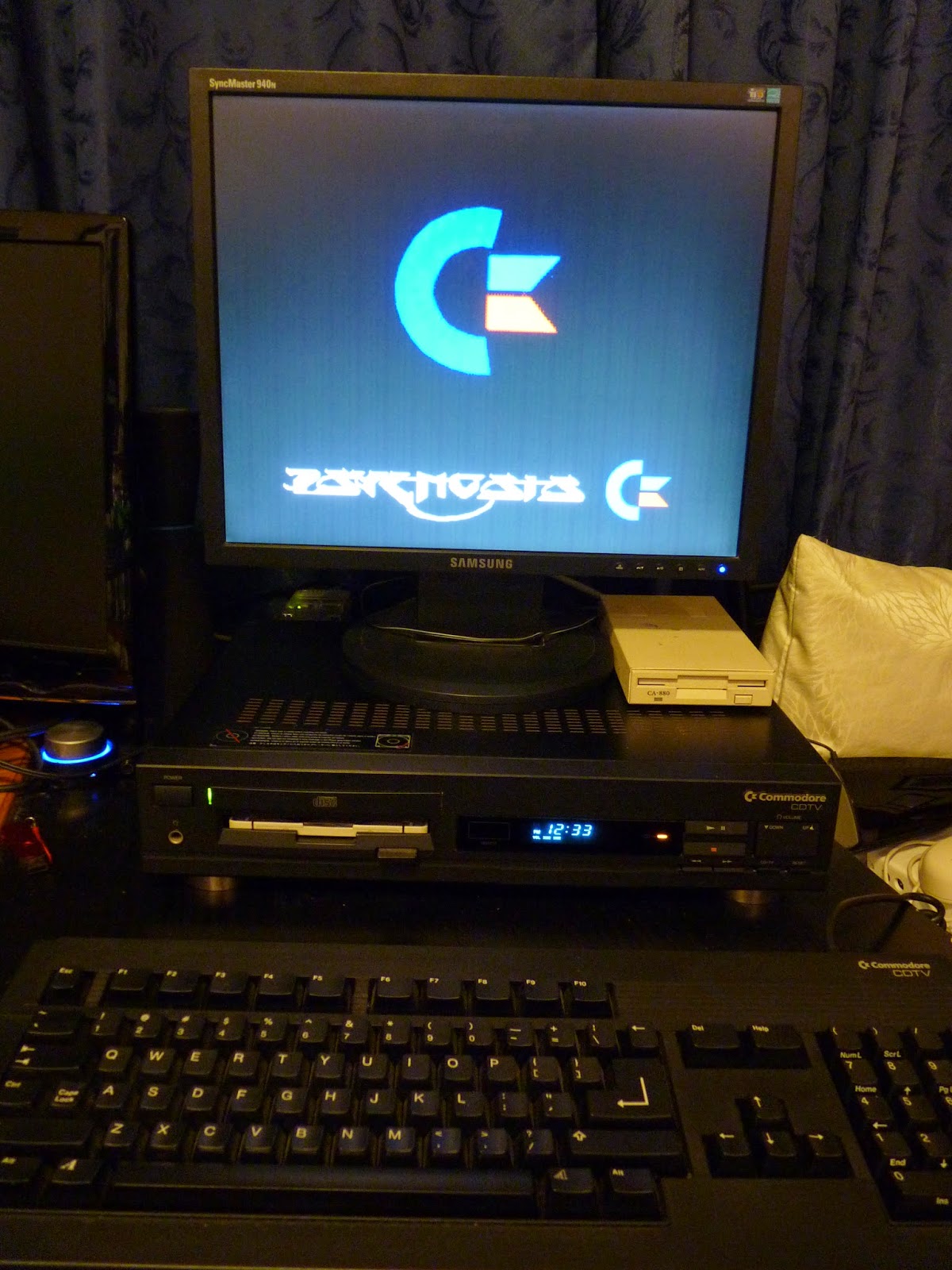 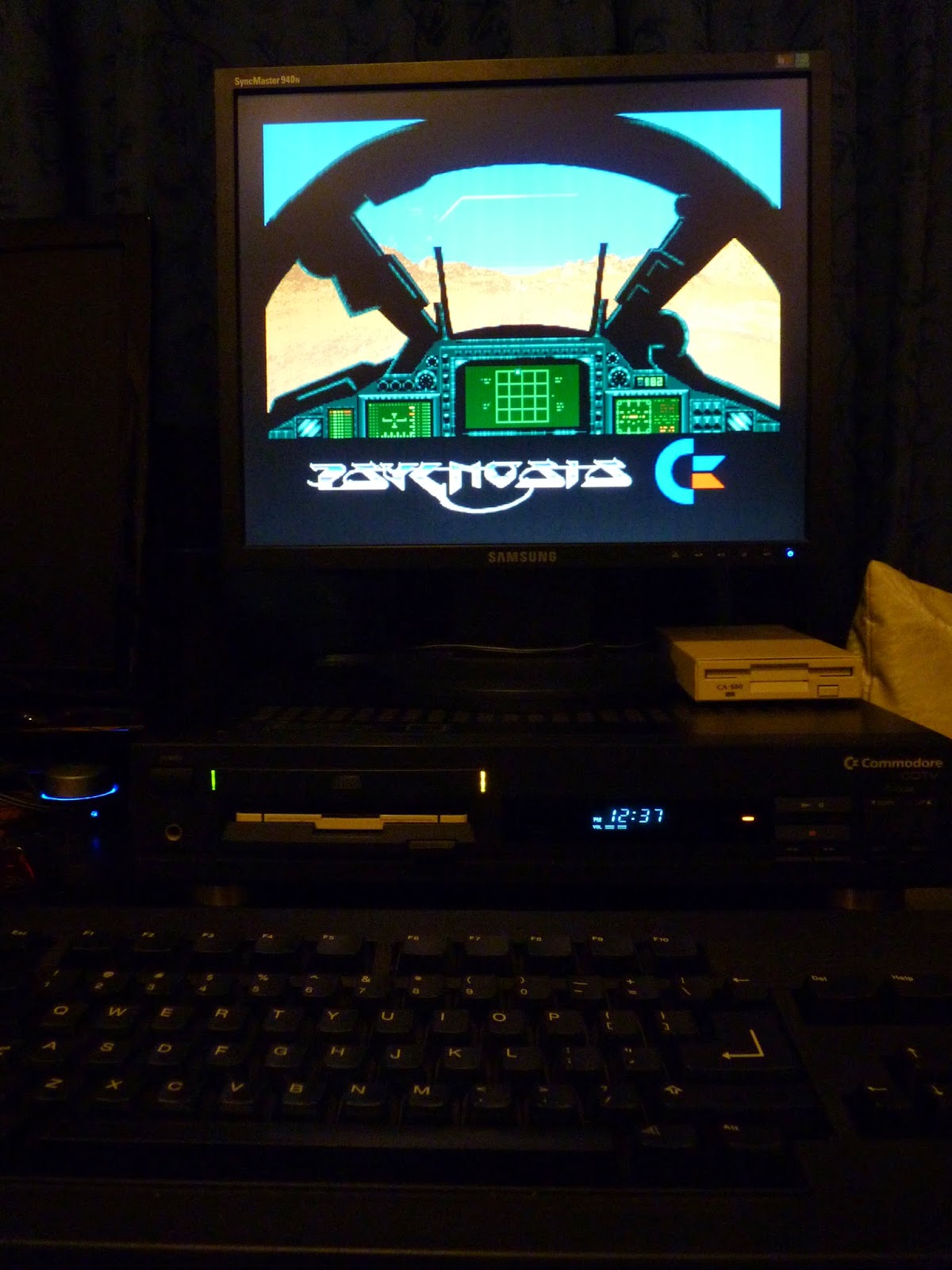 CDTV was intended to be a multimedia centre and not only for games, and to that end Commodore encouraged CDTV titles that were reference material, like Cookbooks, Encyclopedias, Dictionaries, History, Culture CD's and so on. 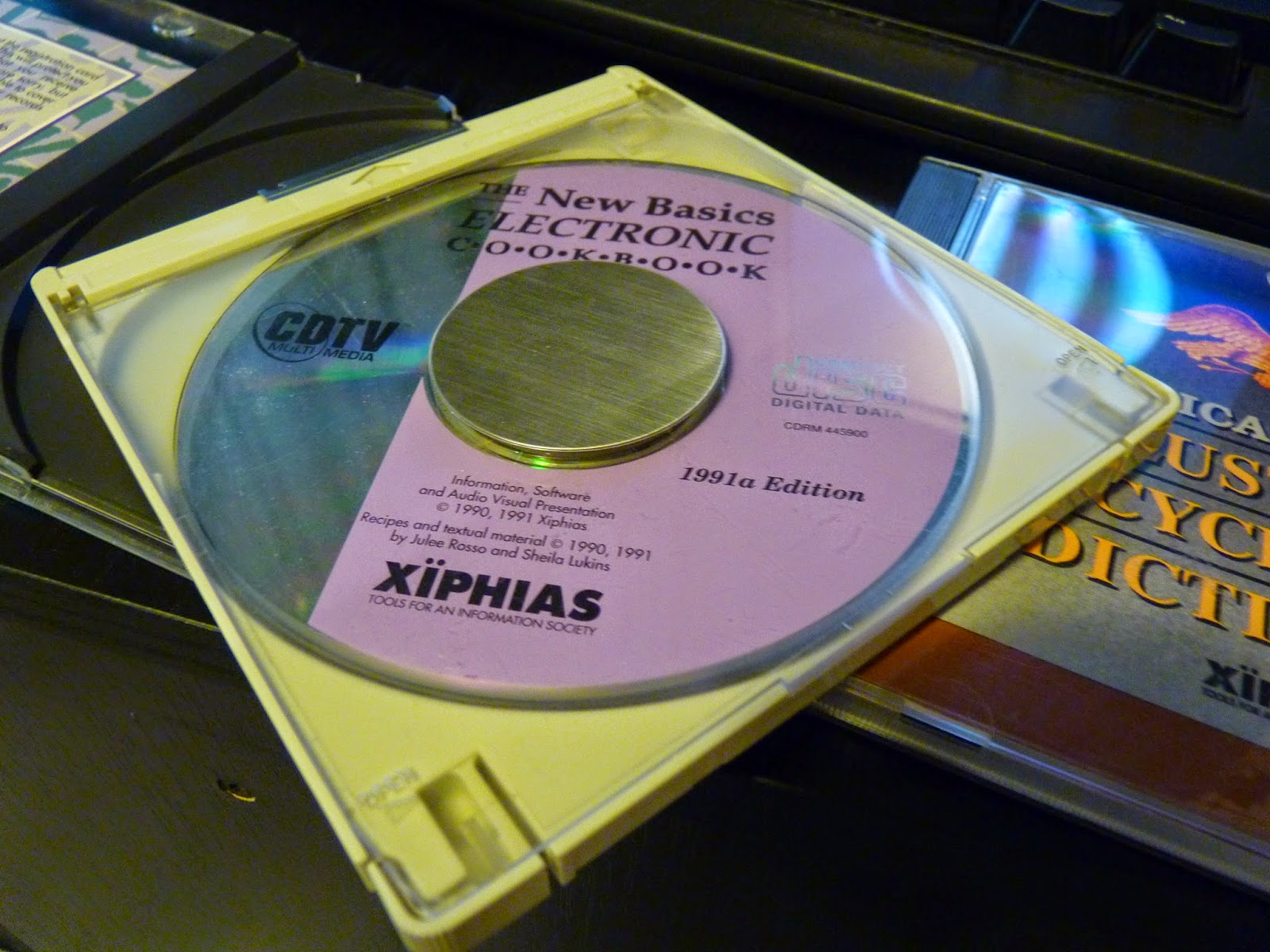 Mind you, they are pretty unexciting to be honest.

I next tried out Xenon 2 on the CDTV, and was very surprised to hear Bomb the Bass high quality audio cd based soundtrack, with multiple songs available to listen to in the game too (which I hadn't heard before):

I have to say that it was more fun playing Xenon 2 with the better quality music on the CDTV than the original Amiga version (I am a big fan of Bomb the Bass too). Using the controller as a joystick was not great for this type of game though: 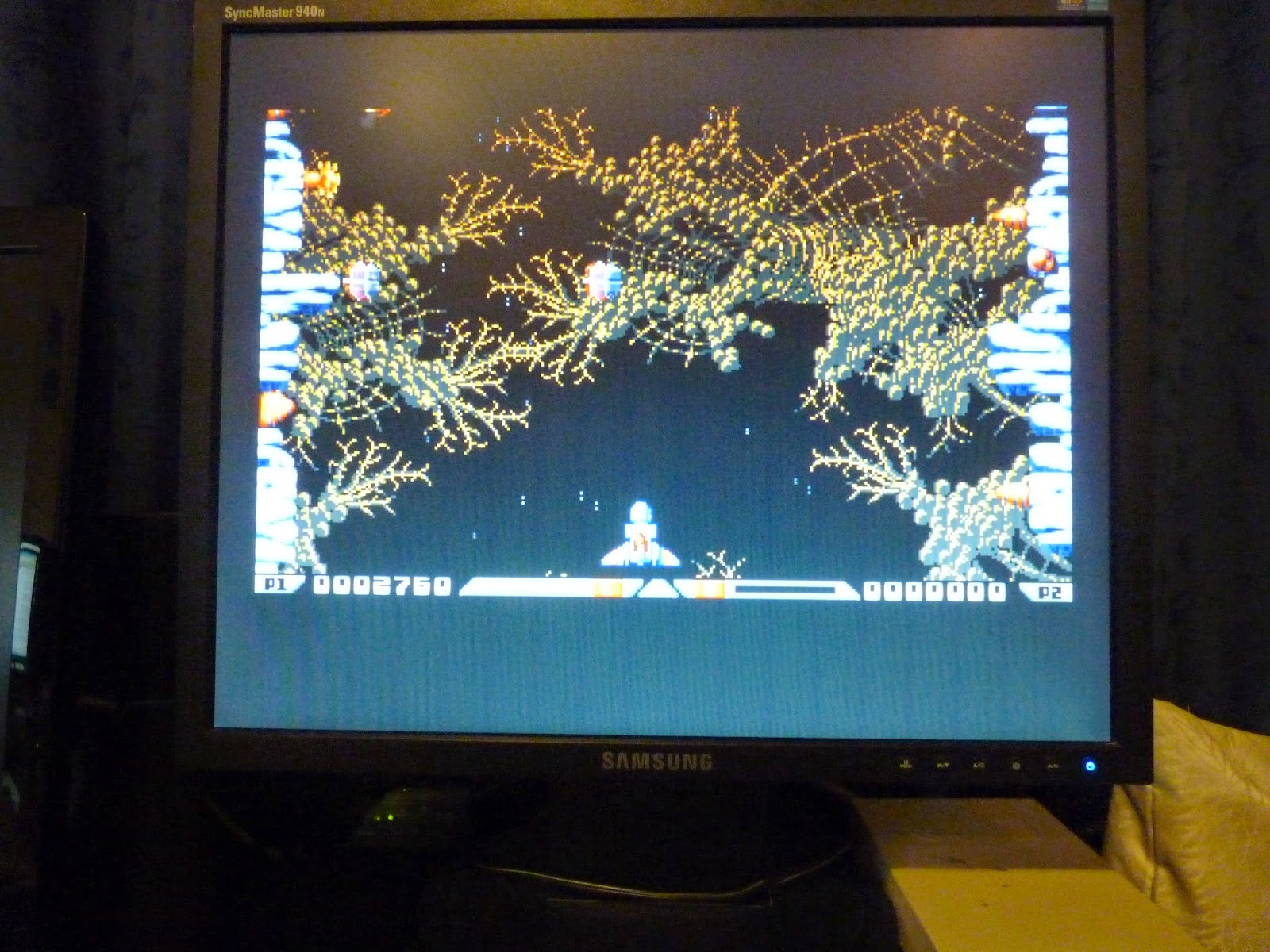 I then tried out Almathera's Demo Collection CD for CDTV. Included in it is lots of demos to play, but also this interesting module player, complete with Amiga style demo effects. Many of my favourite Amiga mods were available to play back through the CD - I thought this was neat: 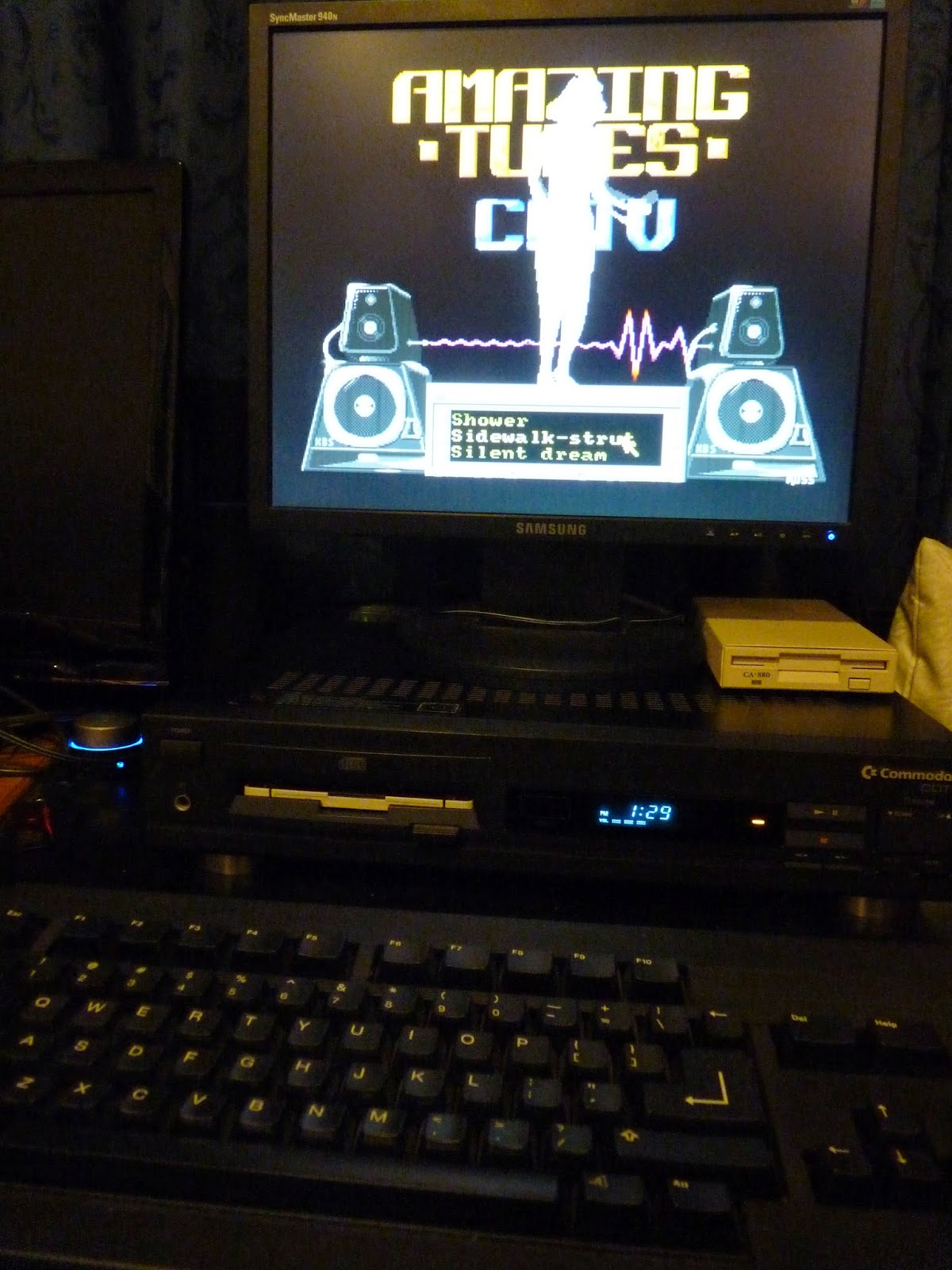 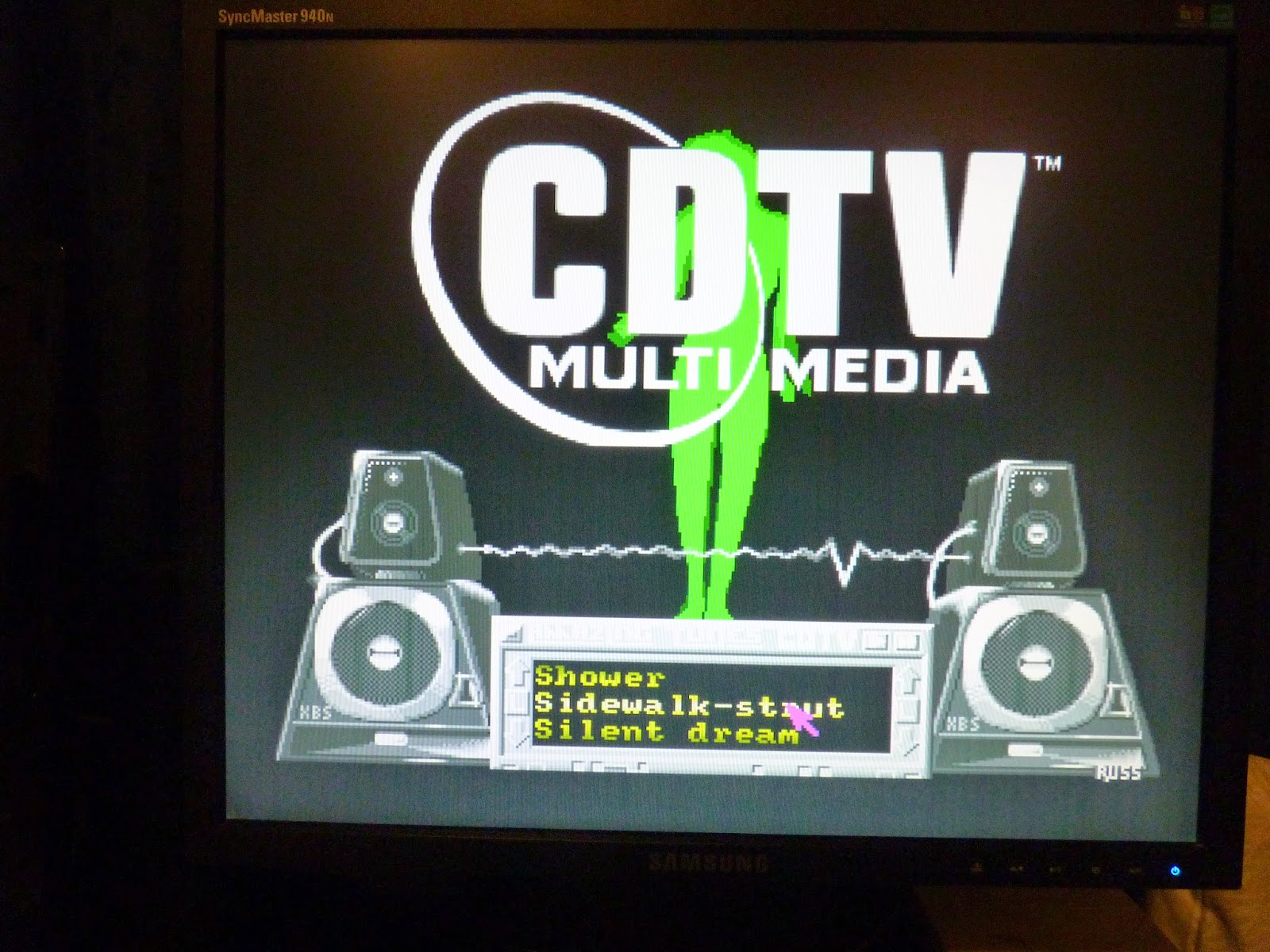 The mod selection interface is a bit too small on the screen, but works well enough - the demo effects in the background brought me quickly right back to the early 1990's! 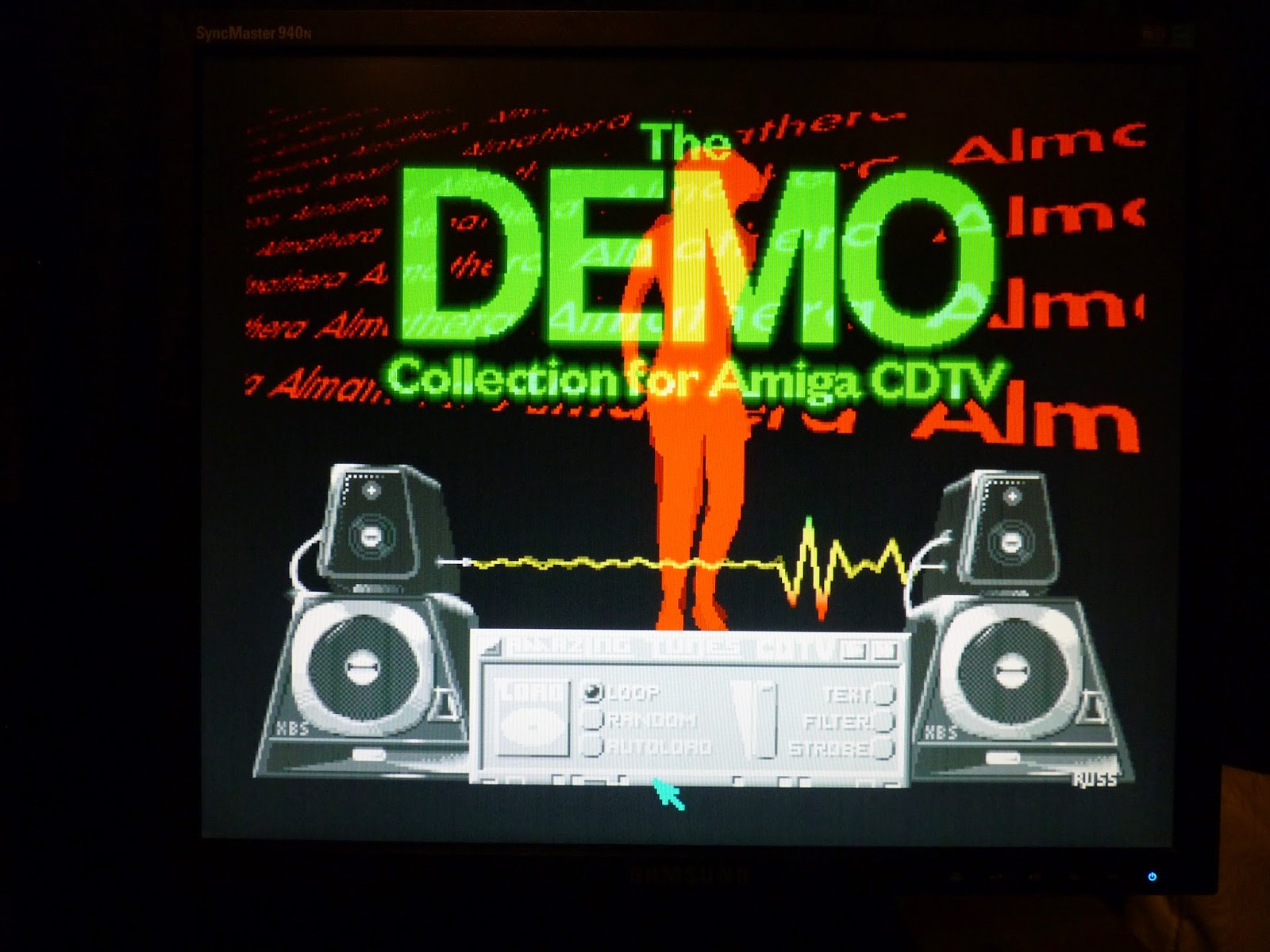 An interesting CD I found to try out is the Commodore CDTV, Amiga 600 and Amiga 600HD information CD, which contains a lot of technical and sales related material for the Amiga CDTV, 600 and 600HD. I imagine at the time it would have looked impressive: 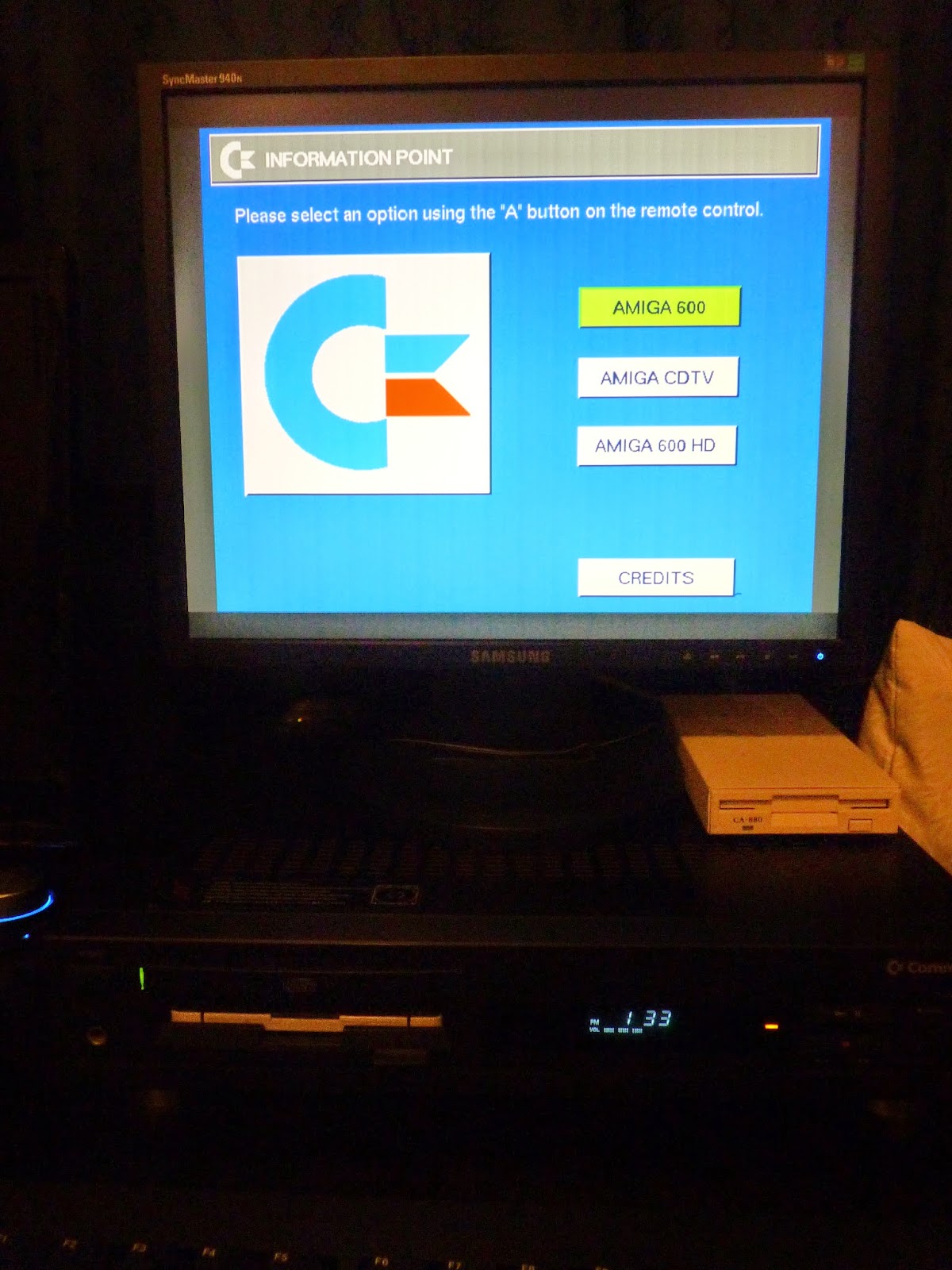 They promoted various games and education titles on the CD too - Learn French with Asterix anyone? 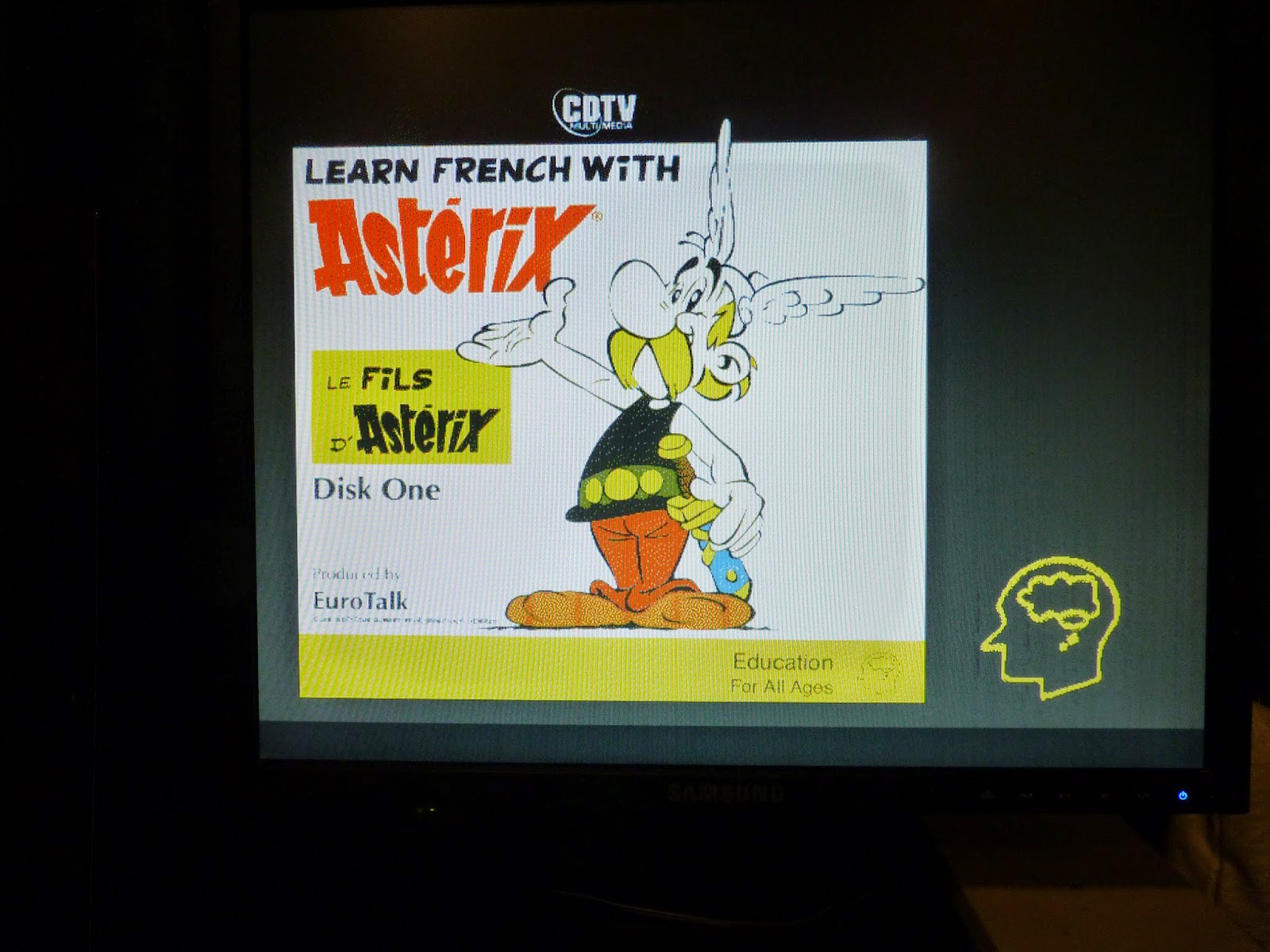 Perhaps learn something about Japan culture and customs? Can't find this CD anywhere - please let me know if you have it or know where I can download it from! 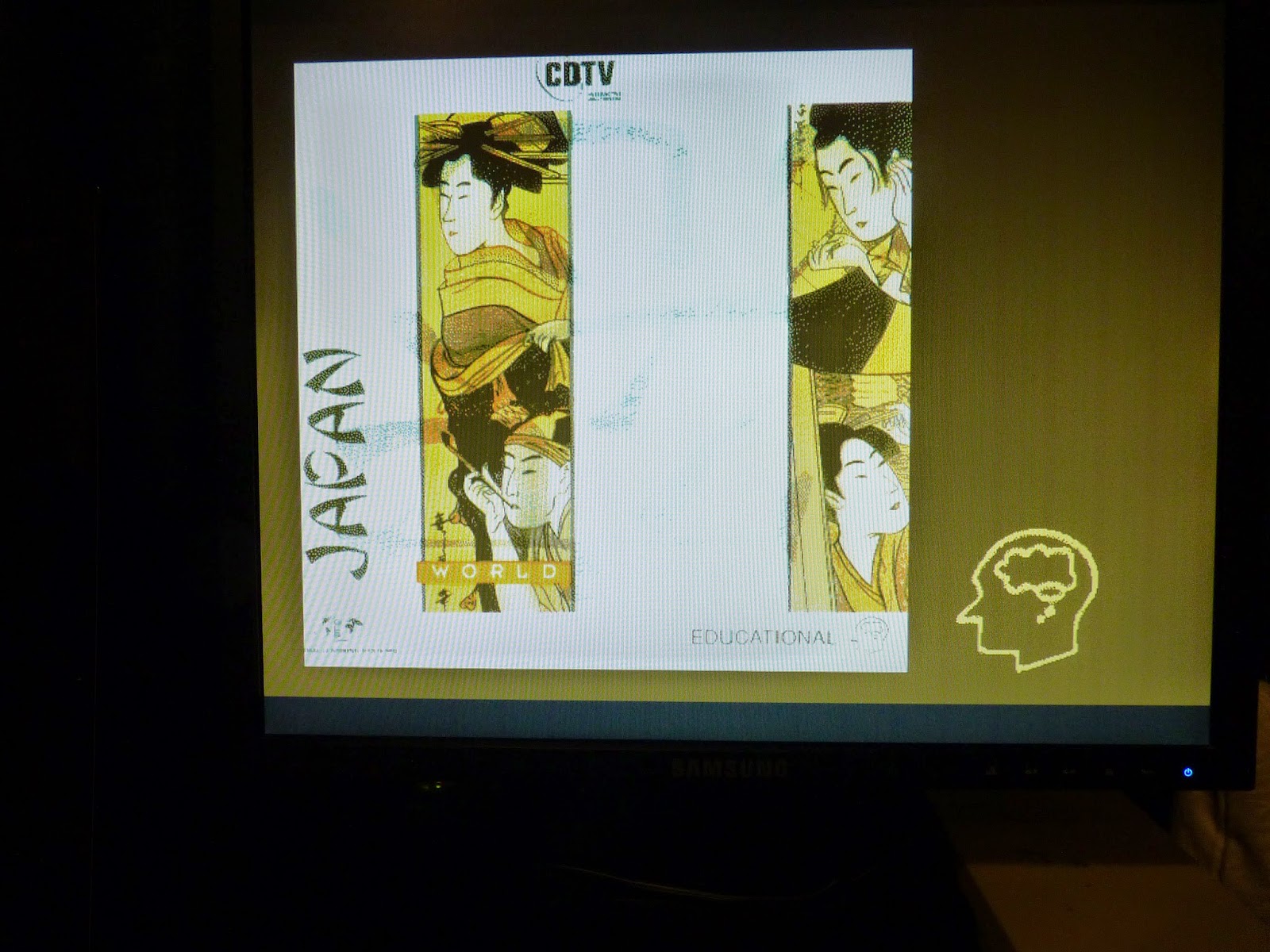 There was also this Amiga CDTV information screen on the CD too, which looks a bit naff to be honest - I guess it is restricted to the basic colours of Workbench 1.3 PAL screens: 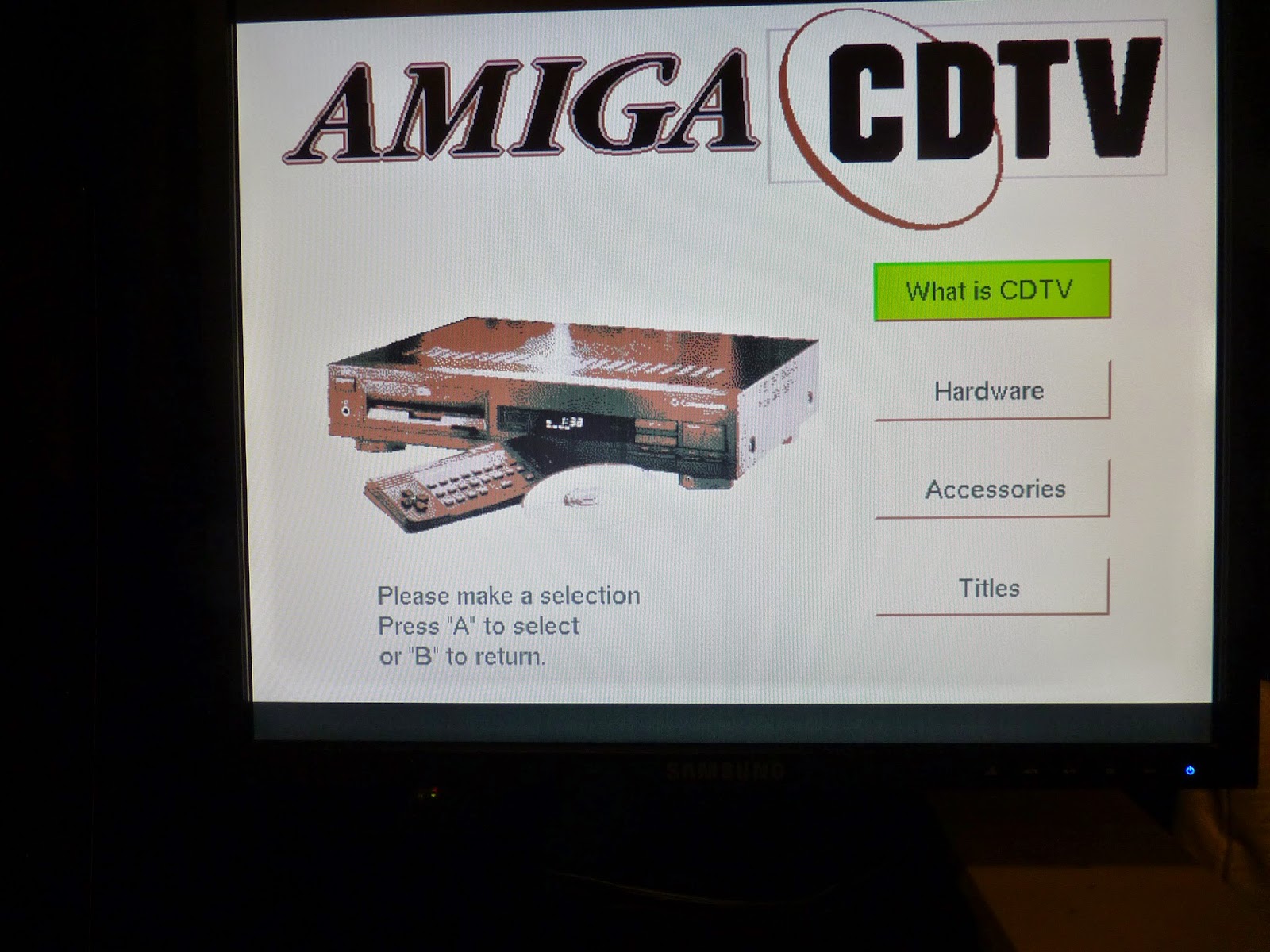 I have to say, I am enjoying finally owning a CDTV and catching up on some software I never got a chance to play with. I have plenty more CD's to try out, but obviously not an unlimited supply so I will pace myself trying them out!