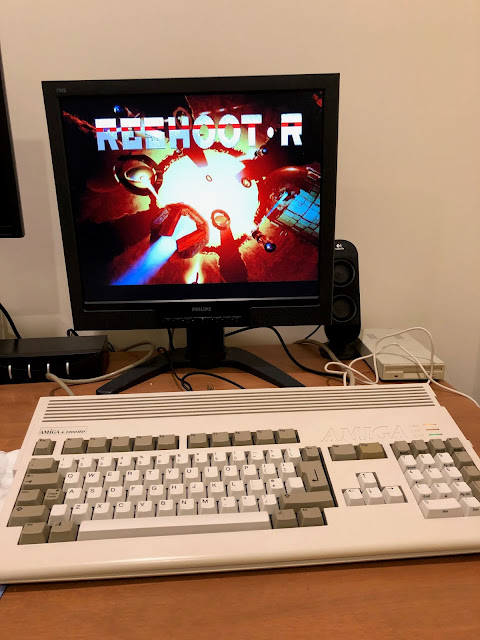 First of all, I am sorry for the long delays between posts.

My wife and I are celebrating our tenth wedding anniversary this year and decided to do the trip of a lifetime to Europe. It was my first time to go to Europe and we saved for ages to be able to go. We had a wonderful time and we were away just over a month in May and early June. This is why the blog (and everything else) took a back seat for a bit.

Among many things we did, I finally got to go to the Monaco F1 Grand Prix in 2019, something I have dreamed to do since I was very young. FYI in case you didn't already know, I am a huge F1 fan, having watched every race since 1988 - it's a bit off topic sorry but here's one picture: 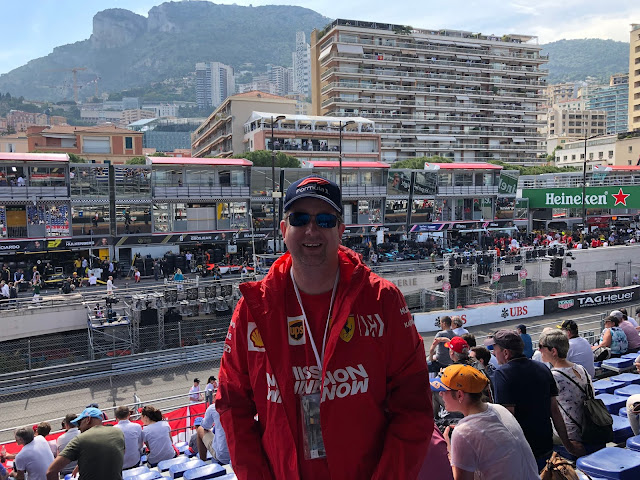 Now that I am back home, I am catching up on the Amiga news and there is a bit to digest!

One thing worth noting quickly though is that this month is now the 7th year I have been doing this blog! I started it back in June 2012 covering the AmigaOne X1000 and expanded it to cover NextGen and Classic Amigas. Amigas are one of my very favourite things to muck around with when not working or watching f1 races :-)

It is amazing that I am still doing the blog, but there is still so much interesting stuff happening in the Amiga world in 2019 - how could I stop now?

I hope you have enjoyed this blog, however long you may have been following it. It is still fun for me to do, and I will continue it as long as it is :-)

Today I wanted to take a quick look at the recently released game called Reshoot-R, which is a shoot em up sequel to the original Reshoot game I looked at on this blog here.

Given the time I have been away, I did a big order a while back for Amiga Future, Reshoot-R and Trap Runner. They all arrived in two packages this week and I was very keen to unwrap! 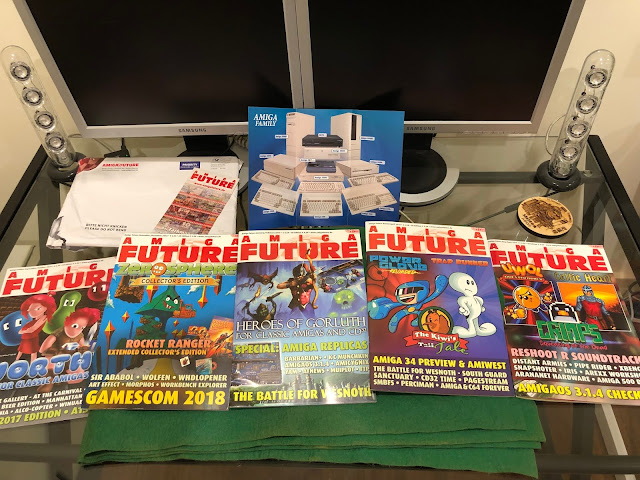 I have fallen behind a bit with Amiga Future magazines while saving for our trip so I had bought a few issues to catch up with some left over money from our trip! 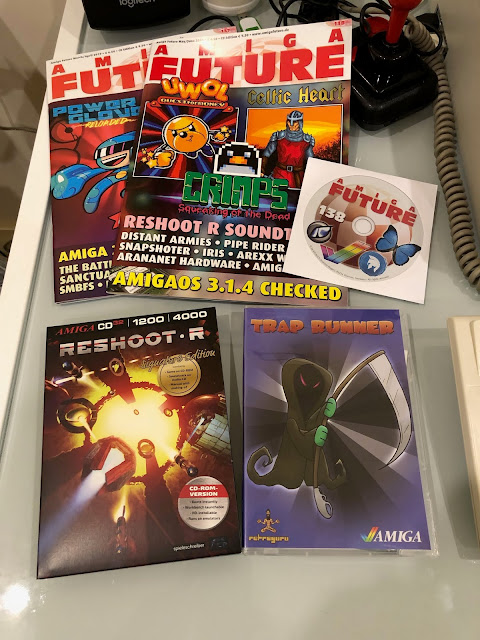 Since this post is focused on Reshoot-R, it is only fair to check out that first! The cover looks great! 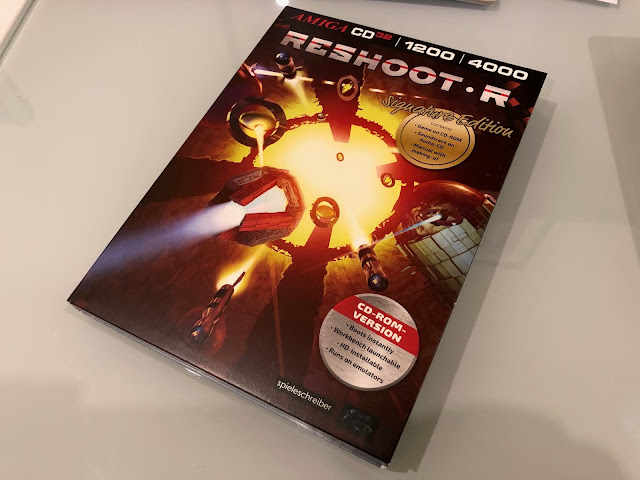 I bought the Signature Edition, which include not only the game on CD (bootable on CD32), it includes an audio CD of the music from the game and a signed postcard from the author Richard Lowenstein! This version costs EUR47.95 which is a bit steep in my view, but it does include the audio cd too.

You can opt for the much cheaper download only version which costs EUR29.95, or the Pure version for EUR34.95 which includes the download version, game CD, instruction manual but not the audio CD. 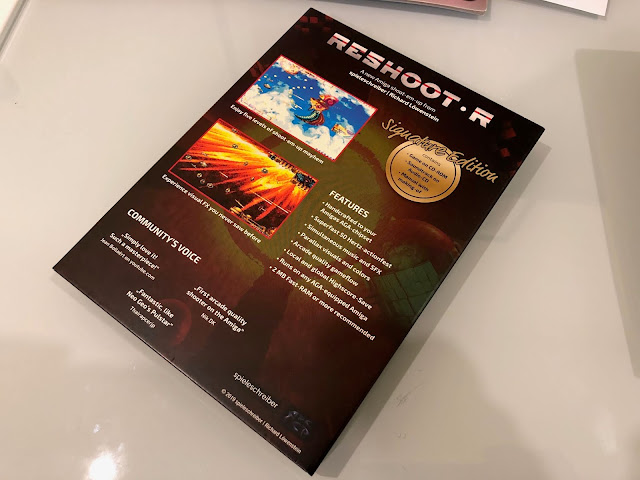 A closer look at the included CD's, etc inside the box: 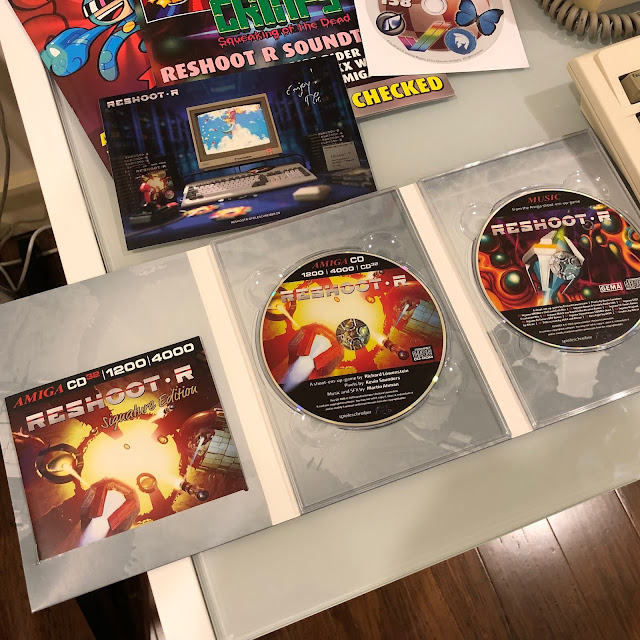 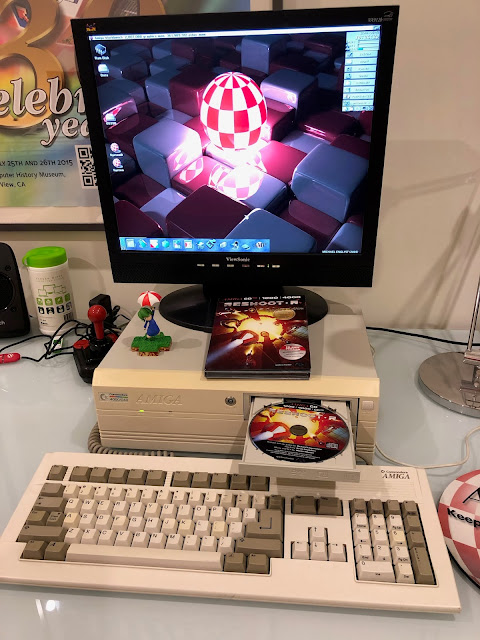 However I did have problems with it on my Amiga 4000. It installed ok, but on launch it would crash and reboot every time. I tried the installer on the CD, and extracted the archive version on the CD too but no luck running it. Maybe it doesn't like the 060 or AmigaOS 3.9? I tried it on my A4000t as well and hit the same issue. I should look into that some more as it is weird.

Anyway, being impatient I copied it to my Amiga 1200/030 running AmigaOS 3.1 via CF card, and I am pleased to say it worked perfectly on that:

My initial feedback on this new version is that Reshoot-R is considerably better than the original Reshoot release. I think the graphics look better and the game dynamics are better too. 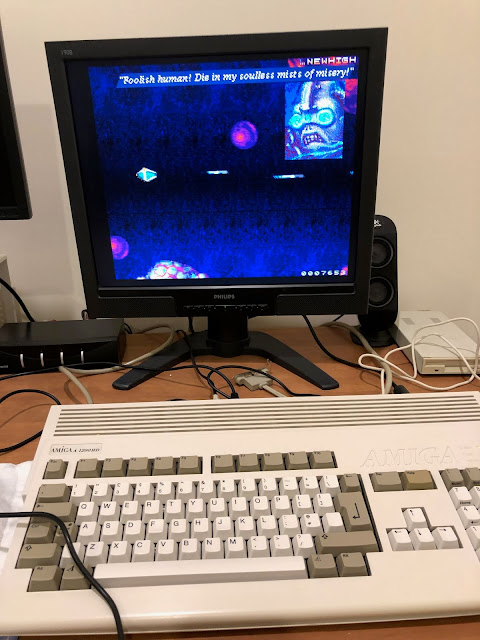 You can choose to play the game without music and/or sound fx from the main screen. 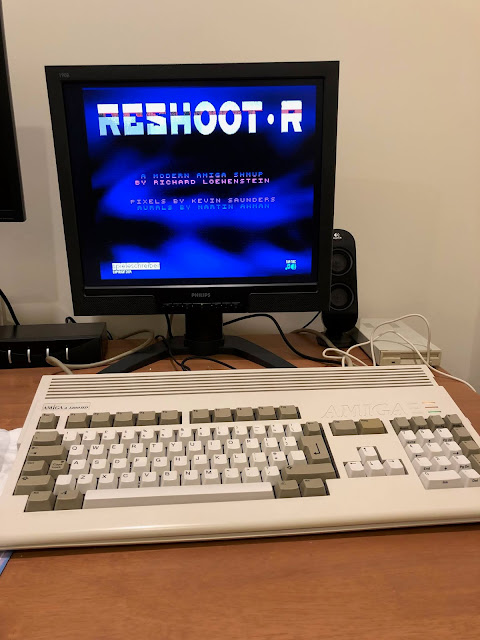 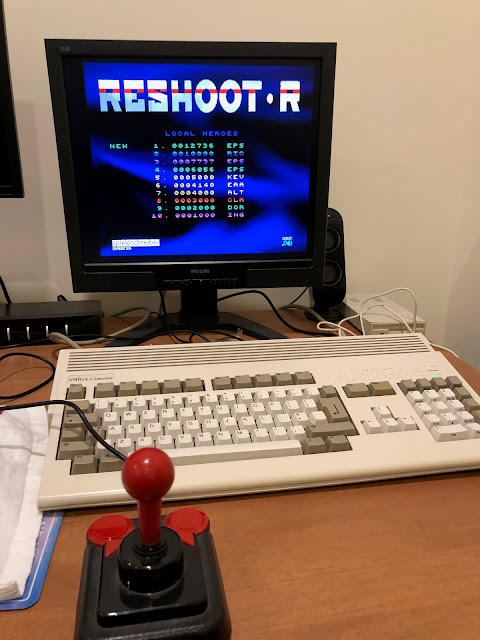 Like most shoot em ups, Reshoot-R is basically shoot anything that moves.

The power ups you can collect along the way are essential as the game gets harder quite quickly. Being able to move quicker, extra weaponry, etc are well implemented.

The included manual explains the game controls using CD32 controller or joystick and keyboard, and also the interesting story of the game development - very interesting read! 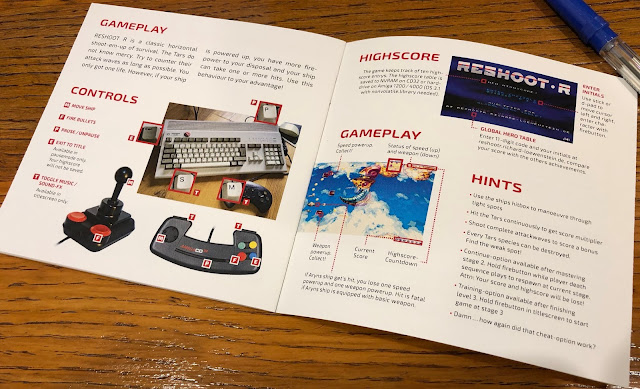 The star of the show for me is the music though - I really enjoyed it and it suits the game very well.

I think this game lends itself well to two player, which I was surprised was not included - I hope a later version will include a two player option!

Graphically the game looks good, thanks to the work of Kevin Saunders. 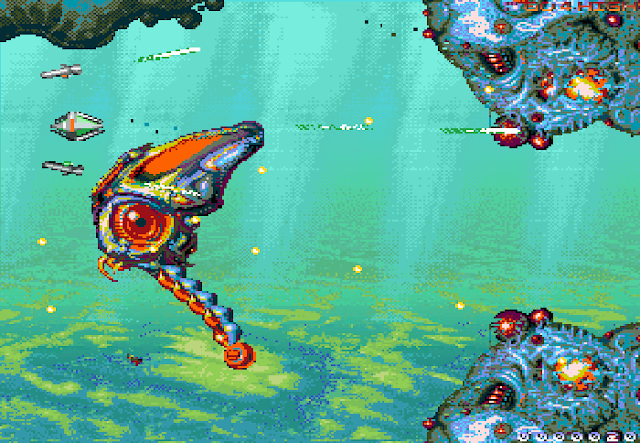 Screenshots don't do the game many favours as it doesn't show the graphics at it's best, but they are good, and the action and frame rate is smooth at all times. The speed of the game is good, and the difficulty level ramps up how you would expect it to. 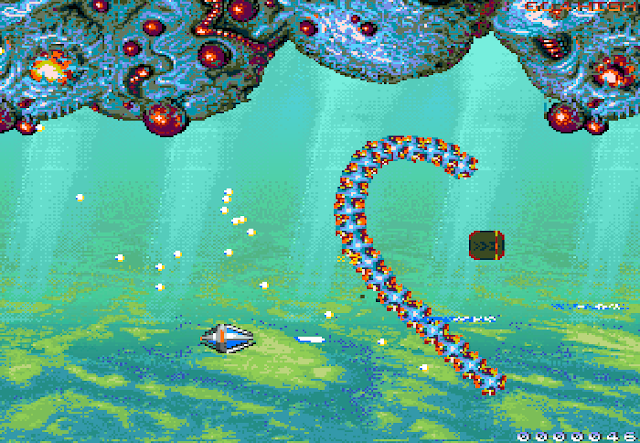 I think having some additional lives and level stage codes to avoid starting from the beginning again each time would help the game a bit. It made it hard for me to show screenshots from the later sections of the game as I was not good enough and kept having to start again to get to the parts to take a picture!

I borrowed these last few images from the APC&TCP webshop as I couldn't get that far into the game to do them myself - sorry! 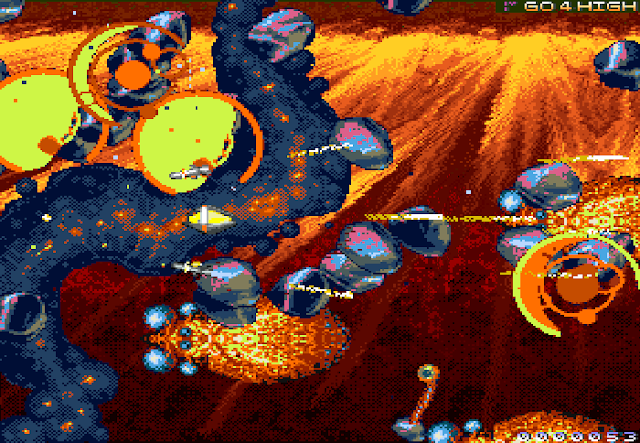 Having said that I guess I have to accept I am not as good at shoot em ups as I used to be back in the days of Xenon 1/2, Silkworm, Menace, Blood Money, SWIV, R-type 1/2, Katakis, Hybris, Battle Squadron, UN Squadron, Atomic Robokid, Project X, XP8, T-Zero and many many more too. Sigh, rattling these off makes me realise how many cool shoot em ups there have been on Classic Amiga.

It is great to see a modern shoot em up on Amiga in 2019 and I recommend picking up Reshoot-R! You can buy it from APC&TCP website here