I purchased and received my copy in the post last week prior to the Adelaide Retro Computing meeting, which gave me the opportunity to show it to plenty of Adelaide attendees on the CD32.

Here is the Game box and internals - the game itself was written by Richard Lowenstein, with graphics supplied by Australian Kevin Saunders: 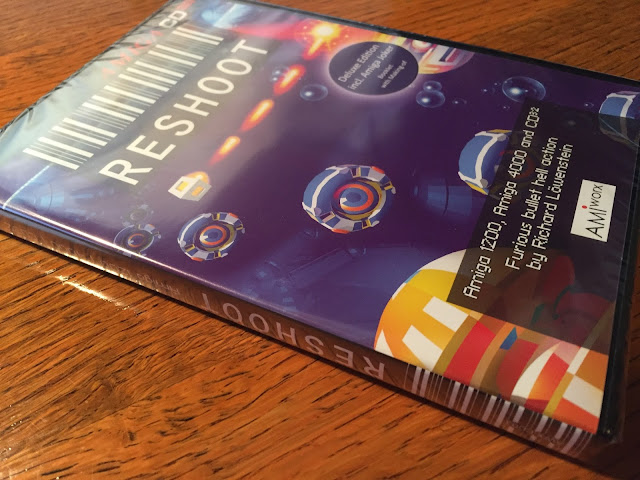 As you can see from the system requirements on the back of the box, the game runs on a stock standard Amiga CD32/1200/4000 with no accelerator cards or extra memory needed. 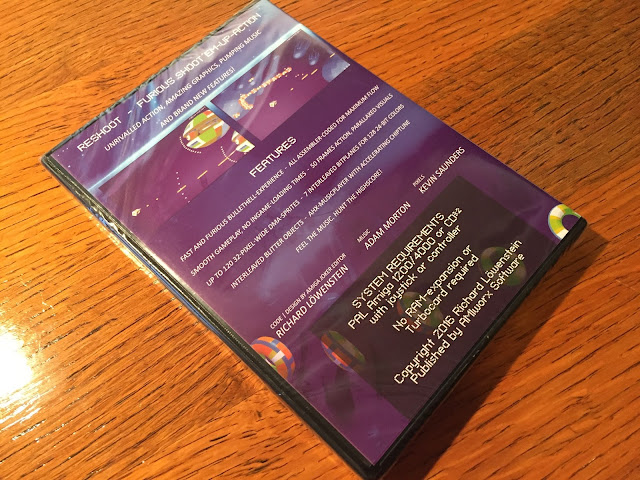 Inside you get a miniature Amiga Joker magazine with a "review" of the Reshoot game, which is actually the instructions! 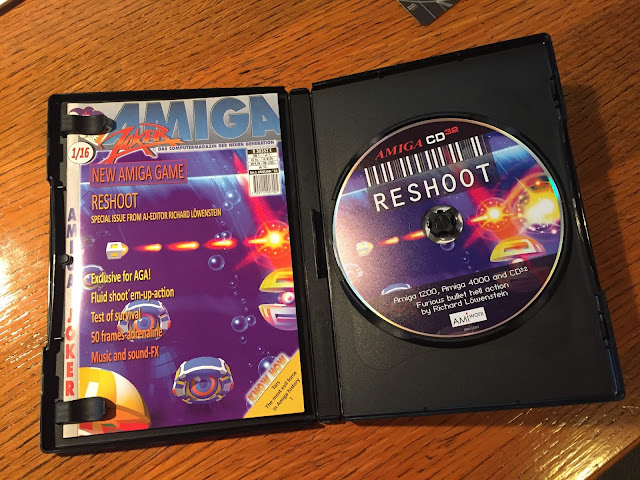 I am impressed with the quality of the gamebox packaging and CD - it looks exactly like a professional CD32 title from when the system was still available!

Here is Reshoot in the CD32 ready to run: 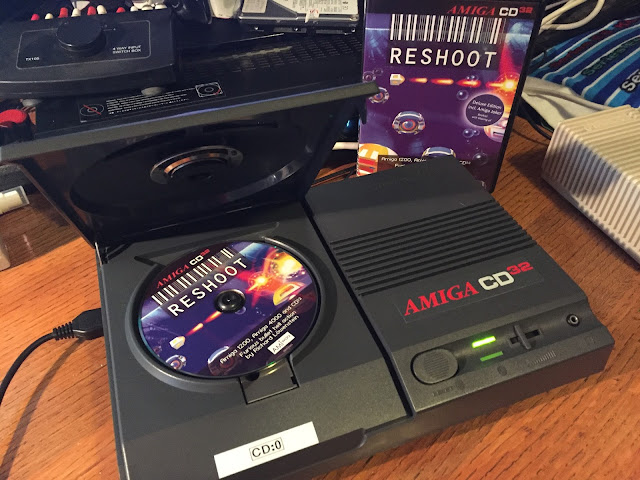 Here is the game title screen: 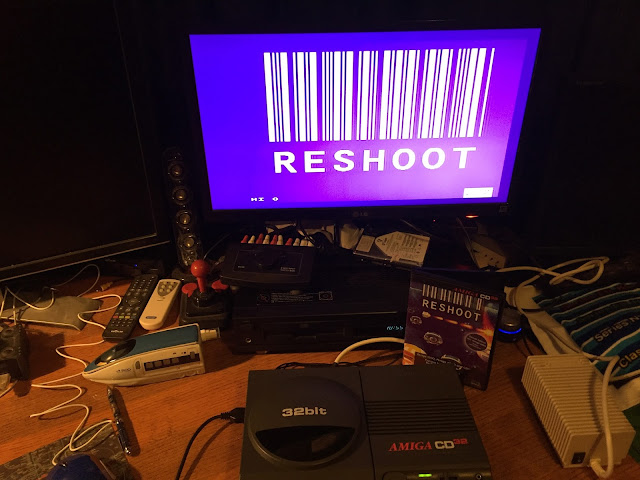 The graphics are nice but the screenshots below don't do it justice: 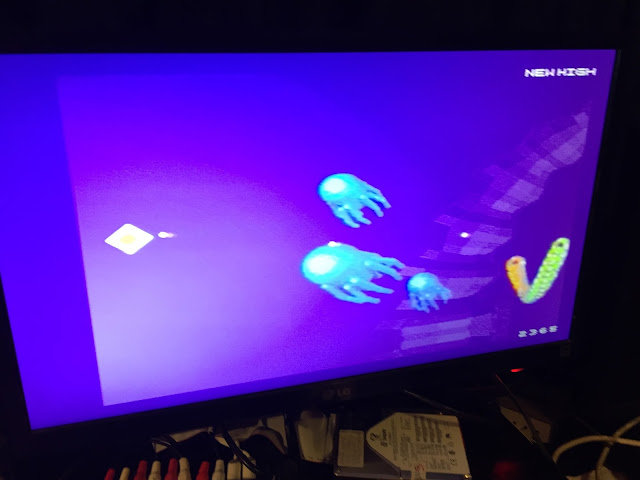 There is a nice Retro soundtrack and spot effects during the game.

I should say from the outset that this game is really hard. Really. I like to think I am good at shoot em ups like this but I don't last long at all! 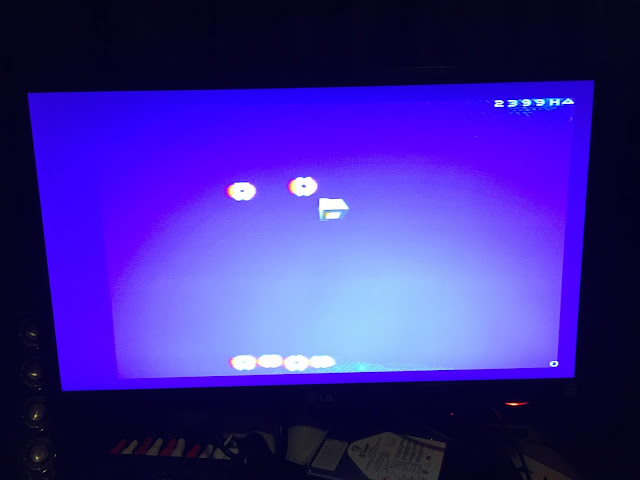 I was hoping to show more screenshots of the game once I mastered it a little bit, but I sucked so badly at the game I never got the chance! The bullets fired at you follow you around the screen, which makes it quite hard to avoid being killed quickly. 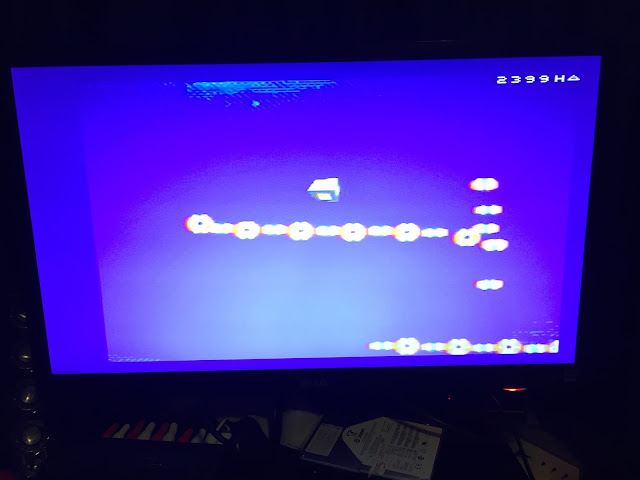 As mentioned I took the game to the Adelaide Retro computing meeting this month with an Amiga theme and had Reshoot running on the CD32 on the big screen for everyone to play on the night. Feedback was positive, but people agreed it was a tough shoot em up! 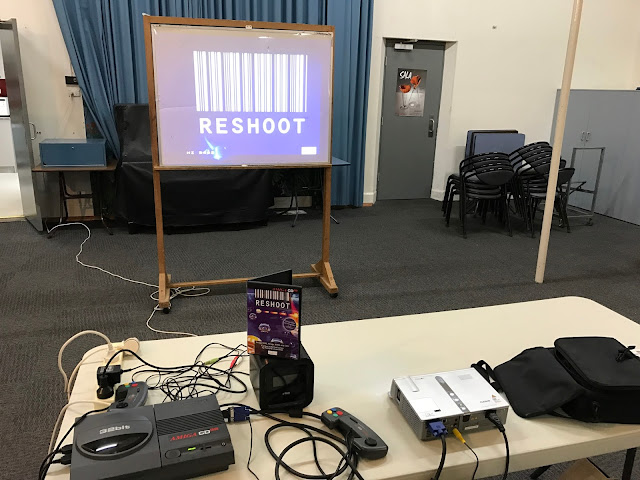 I think the game itself is attractive, plays fast and looks great.

Others will probably have better luck than me - I will certainly give it another go soon though, as I don't feel I did the game enough justice to do a full review of it. I did want to show it here though.

I include a publicity shot below from the developer from further into the game, which I never got to  -so you can get an idea of the harder (!) enemies later on: 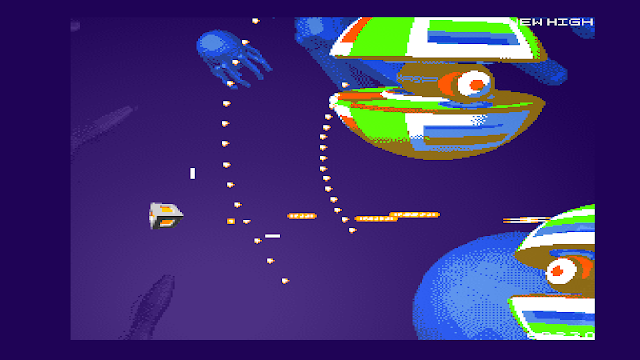 Maybe I am just getting older and no longer as good at these types of games as I think I am! Please don't take my word for it being tough, please try it for yourself!

So there you have it - we have two new games for Amiga CD32 (and other Amigas too) in 2016. Catacomb 3D and Reshoot and the promise of even more games in the works - how fantastic! :-)