I read about how to get printing working on X1000 (actually on AmigaOS 4), and after initially being frustrated by the lack of information, decided to give it a go anyway. To be honest I don't need to print much these days, but it is nice to have the function available and I wanted to share what I found.

I have two printers - a HP Photosmart C5380 All-In-One Printer, and a Brother HL-2242D Laser Printer. I use both on my Mac and PC via USB and they work flawlessly.

Unfortunately modern USB printer support in AmigaOS 4 is VERY restricted, and there are not many printers that work well with it. PCL or PS (PostScript) compatible printers appear to work ok, as do HP inkjet style printers using the OS4 HP Photosmart printer driver, which you can download from OS4Depot.net. I believe there is a Canon printer driver too, but I don't have a Canon to test.

The Brother printer doesn't work on the X1000, as I expected. It can be connected to the X1000 via USB and it registers under AmigaOS4 - however, as it is not PCL or PS it doesn't work at all with AmigaOS4 PS/PCL drivers in my testing - it just prints out blank pages....

So I will focus on the HP Photosmart C5380. As it has a built in scanner and USB/Media card module, it is possible to scan to SDCard/USB stick connected to the unit itself, and then read that card/stick on AmigaOS4 via the printer to copy the scanned images. This got around needing to try to get scanning software working on AmigaOS4. Actually, because of this useful feature I never scan to the PC/Mac directly either. :-)

For printing on the HP Printer I used the previously mentioned HP Photosmart driver, obtained from OS4Depot.net.

After you have downloaded and extracted the driver archive to RAM: disk, you will get this folder on the RAM disk ready to install the driver (note the icon for HP_Photosmart), just double click on Install driver:

After running the install driver script, it asks where to install the driver, as below. Just accept the default SYS:Devs/Printers and press OK. 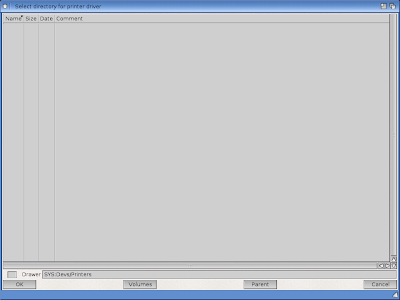 It finishes very quickly, and if you check the SYS:DEVS/Printers folder you will now see the new driver is there, as below. Curiously, as shown below the HP_Photosmart.info file is not there so I manually copied the info file from the RAM Disk extracted folder! Perhaps the author of the program could modify the script to copy the .info file too! (Update 25/6/2012 - the author has released a new version of the HP Photosmart driver on OS4Depot.net that now fixes this issue I mentioned above amongst other new bug fixes)

NOTE: Please ensure that the HP printer is connected to the X1000 and turned on before doing the next step.

I then went into Preferences as per the screen shot below, and then double click the Printers icon as we now need to make some changes before we can print anything to the HP Printer. 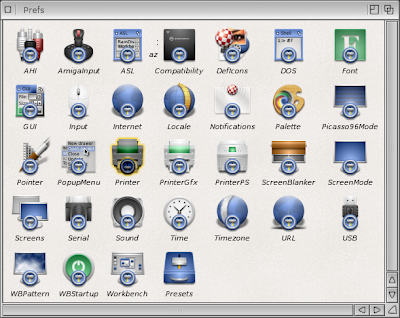 Below screenshot shows the changes I made in the Printers preferences: 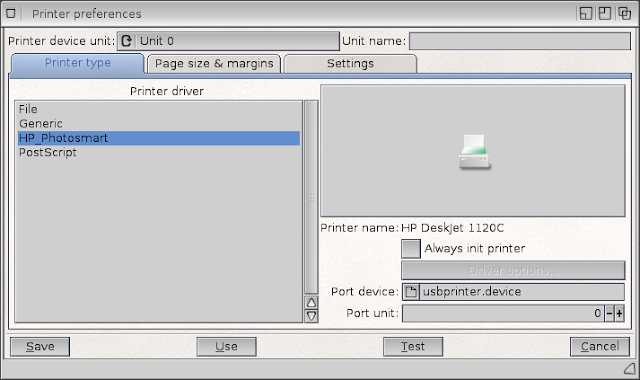 Essentially, I changed the Printer Driver on the left to use the new HP_Photosmart driver, and then modified the Port Device field from parallel.device to usbprinter.device. When you change the port device to usbprinter.device, the AmigaOS will then check for the presence of the USB Printer before you can Save the settings successfully. (This is why you need to turn on and connect the printer before you change this value).

After this, I did a test print from GoldEd s/startup-sequence and from AmiPDF and prints ok, although the print dpi is quite low.

I wanted to test printing from mui-owb too, but then noticed there is no print option! Interesting....

I plan to do some more printer testing on the HP Photosmart Printer in due course, but for now it works and I am happy enough with that!

Basically, if you want to print to a modern USB Printer from your X1000, I think it makes sense to buy a HP LaserJet or HP Photosmart printer which will work with the limited printer drivers available to AmigaOS4 right now.

I hope this information is of use to someone trying to get printing working on the X1000!