This past week we finally see released the new Icaros Desktop 2.0 upgrade (AROS), so I was keen to try it out on my existing Icaros 1.5.4 installed netbook (I showed this at AmiWest 2014) - the Acer AspireOne ZG5. 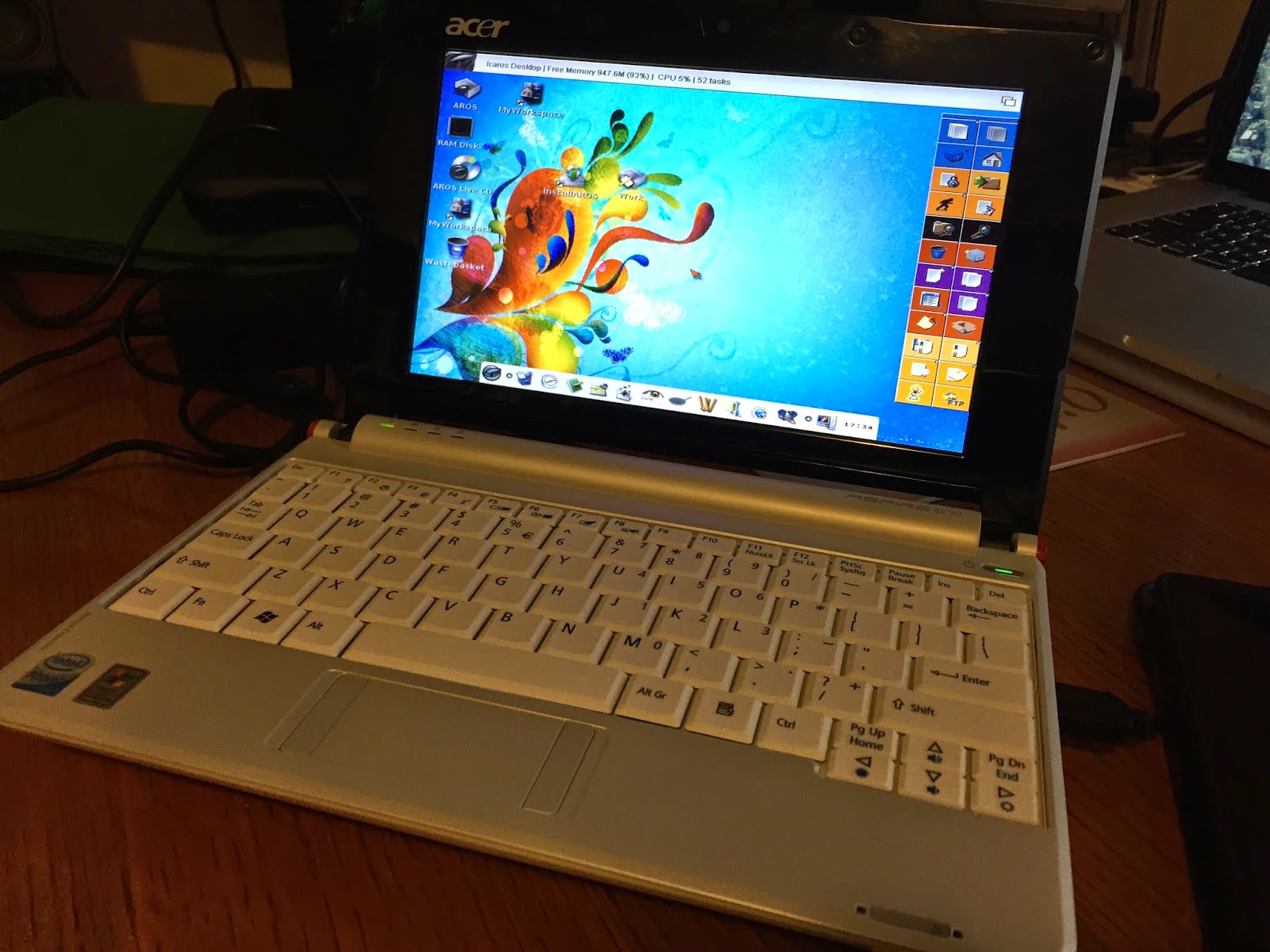 You can download the Icaros Desktop 2.0 Live DVD from here. The Dvd includes everything you need to get a usable Icaros system on an x86 PC, including a large array of applications and utilities included! (You can click on any image to expand it for more detail) Icaros is an alternative to AmigaOS4 and MorphOS as a Next Generation Amiga operating system - unlike the other two I mentioned it runs natively on a standard x86 PC.

You can just boot the Live DVD to try it out on your x86 PC system - you don't have to install it to hard disk until you have tested it out and are ready to do so. It is free to download and use!

The next photo shows a closer view of the Acer Netbook running the Icaros Desktop 2.0 live DVD from external dvd drive connected to the netbook via USB. 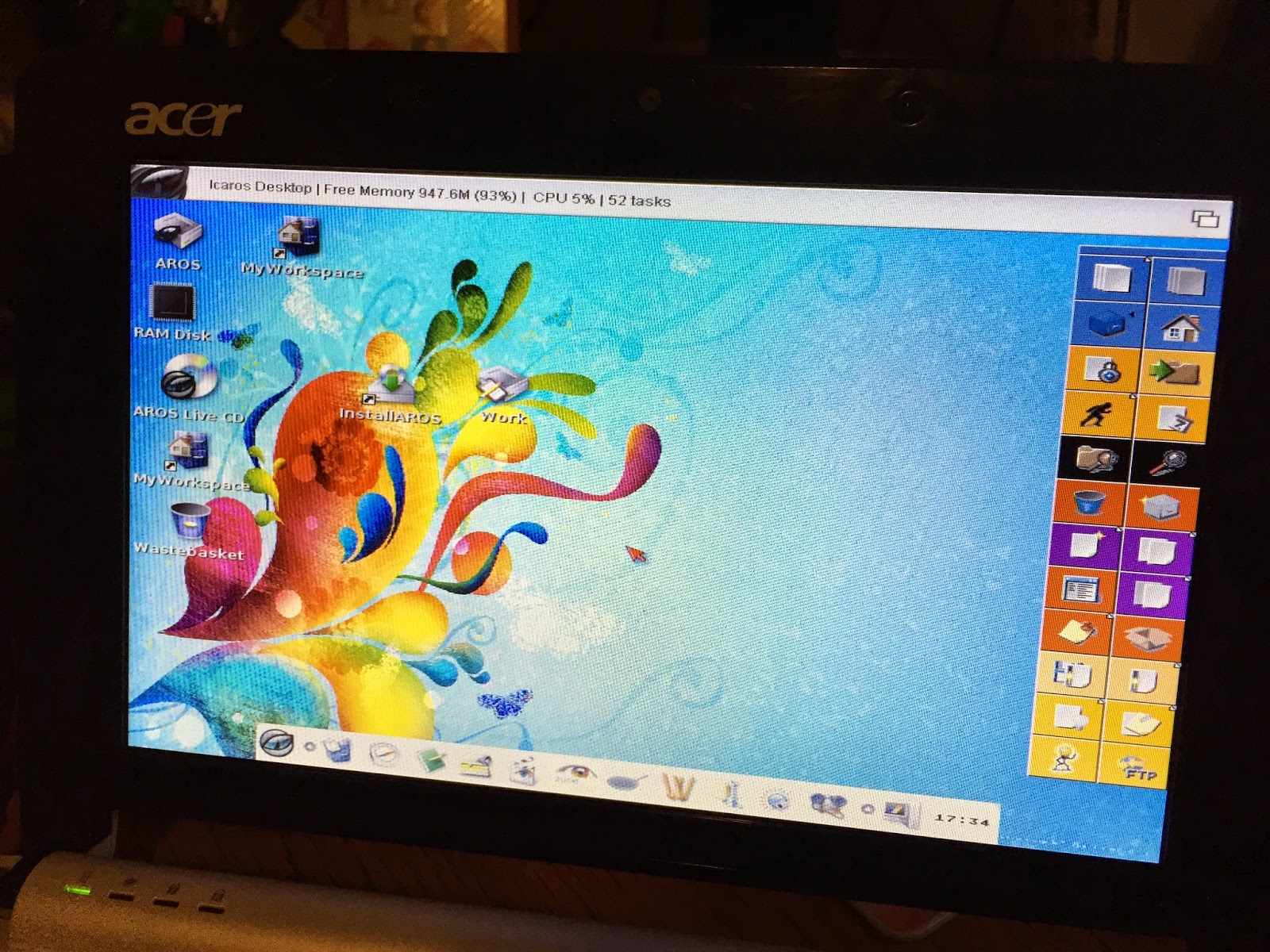 After installing Icaros Desktop 2.0 onto the hard disk using the InstallAROS icon on the desktop (which wiped the previous 1.5.4 installation - it does prompt you before it does it!), you then get a nice new Icaros Desktop using Directory Opus 5.9 Magellan as the Desktop, rather than the previously used Wanderer UI.

This is a great move in my opinion - I definitely prefer the Dopus 5.9 Magellan UI to Wanderer.

Since it is Directory Opus 5.9, I can easily change the drawer views to Icon Action (Right click, View As > Icon Action), creating the familiar DOpus interface for easy file management under Icaros: 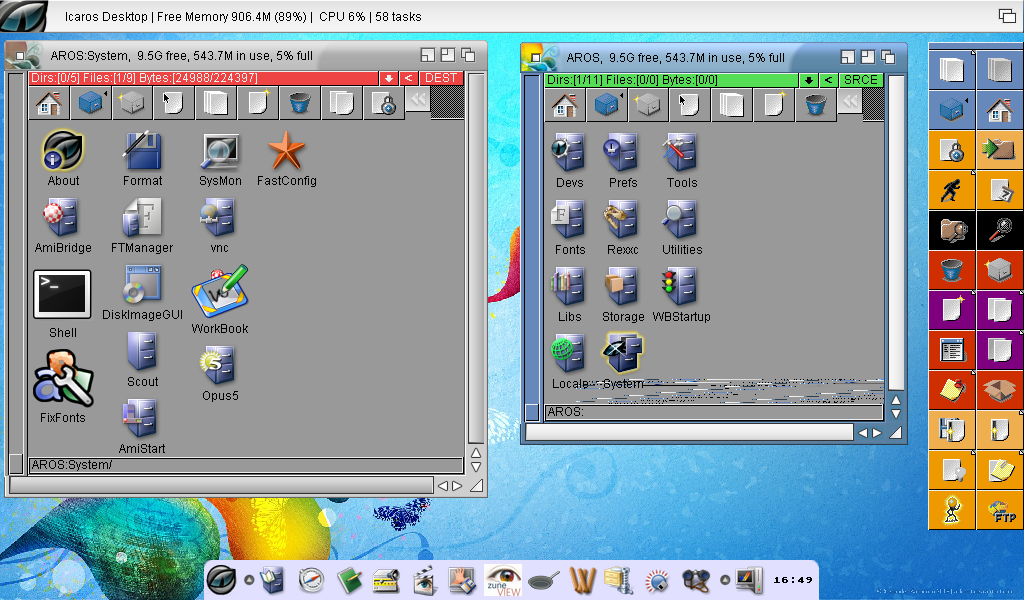 There is also a modified Directory Opus toolbar on the right hand side with common operations - the distribution thoughtfully includes a icon on the bottom left of the toolbar that explains what the icons do: 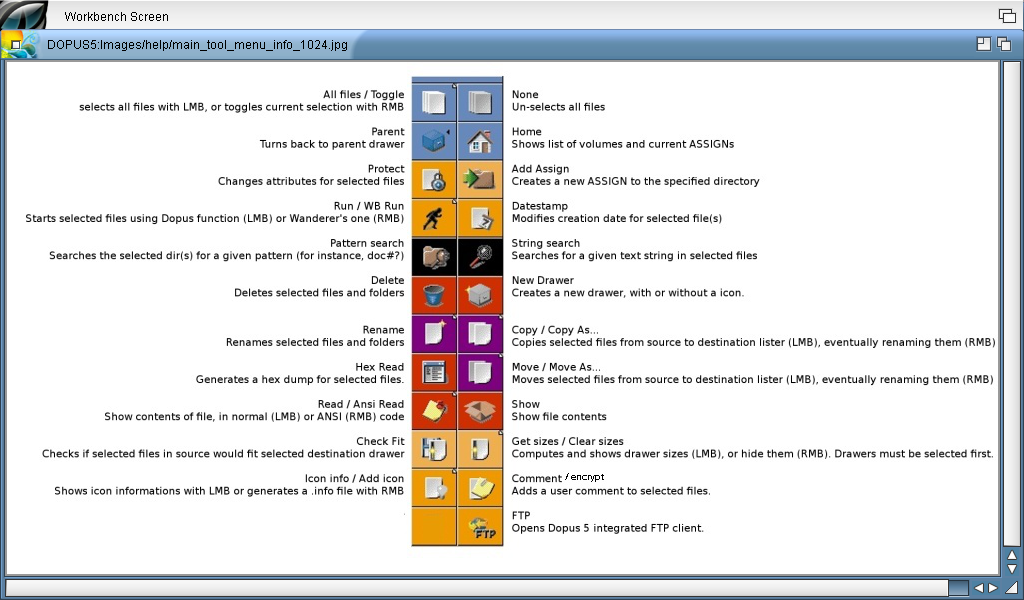 One of the new applications included in the Icaros Desktop 2.0 Live DVD is Zune View, which allows thumbnail view of images, and simple graphical operations on images such as Resize, crop, Rotate, Flip, Color correction and more: 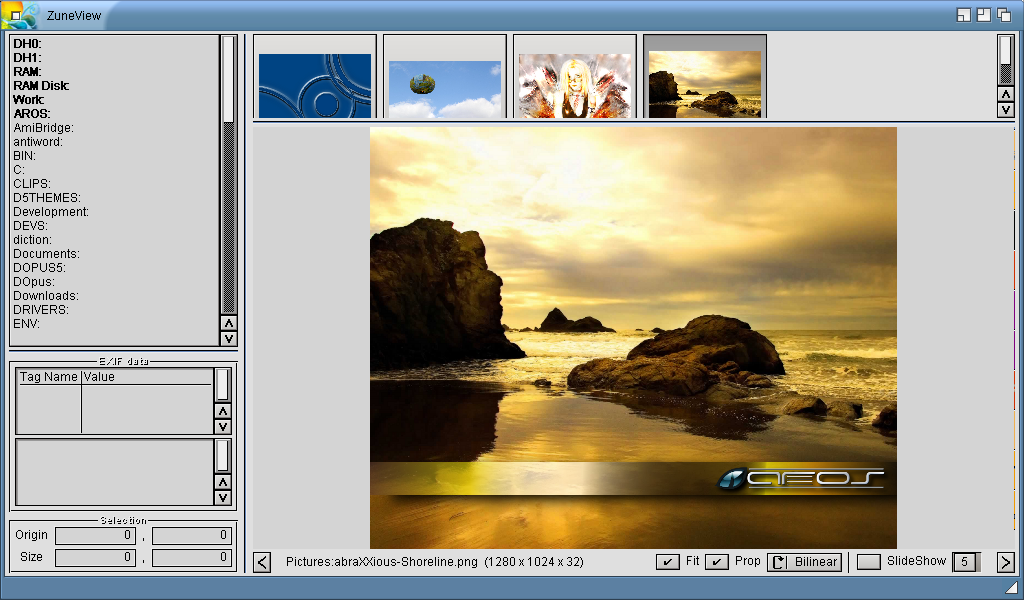 The Dock icon bar from previous versions of Icaros is still present in it's latest incarnation, allowing easy access to all programs installed without having to navigate through the drawers via Directory Opus: 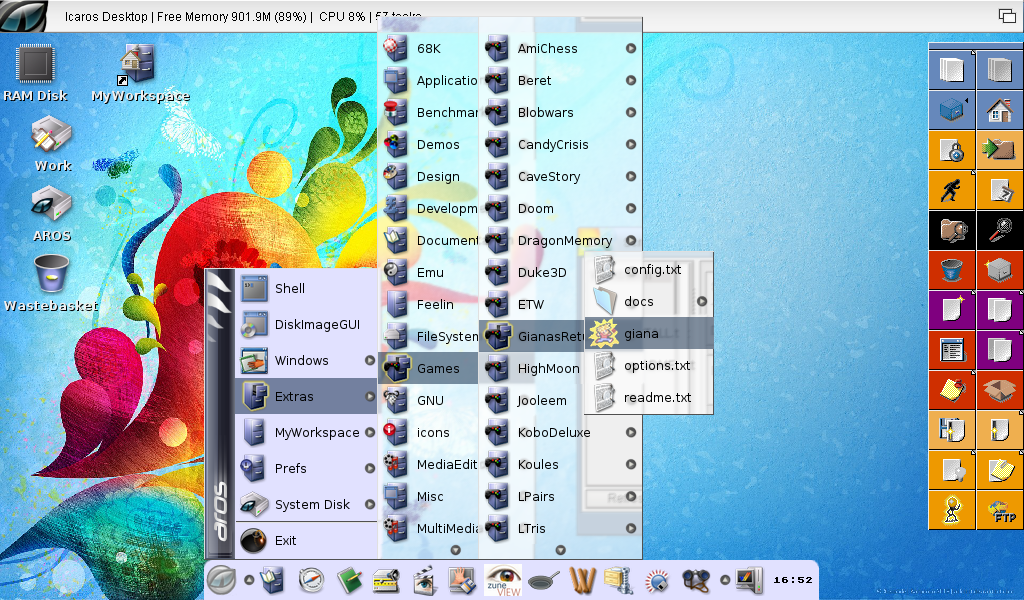 Helpfully included in the installation of Icaros Desktop 2.0 is an 82 page Manual, which I was reading while listening to the example MP3 music file included in MyWorkspace vis MPlayer. 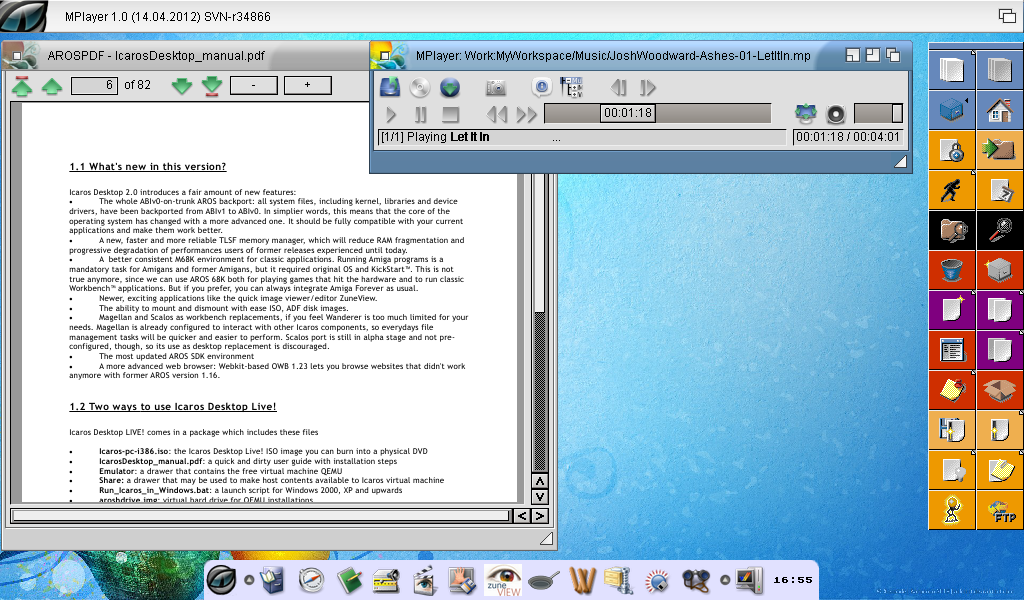 MyWorkSpace is a bit like the Windows Library folder concept under a user's home folder, with Music, Videos, Pictures, etc, subfolders under MyWorkspace for easy access. In addition to a shortcut on the desktop, each of these subfolders also has an Assign, eg. Pictures: which allows quick access from file requestors.

Next I wanted to try out the DiskImageGUI, which I have used heavily on AmigaOS3 and AmigaOS4, but not on Icaros before. It works exactly the same and works out of the box - below I mounted a CD iso file and also an old Amiga Computing cover disk to prove it works: 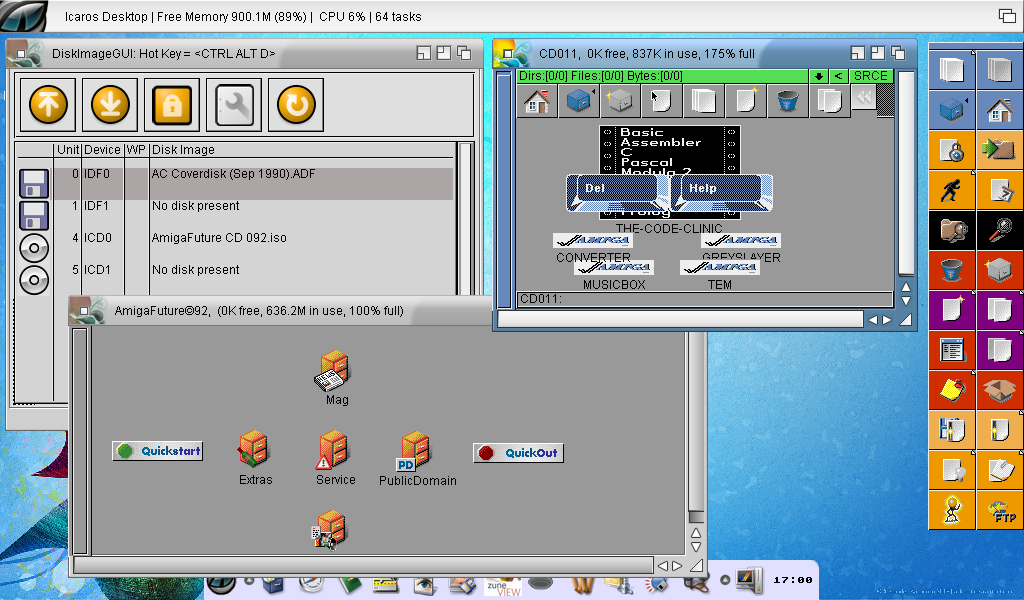 You don't have to use the DiskImageGUI though to mount images - you can also right click on an ISO in the Directory Opus listers to mount as ICD0 for example - very convenient. I mounted a CU Amiga CoverCD ISO this way: 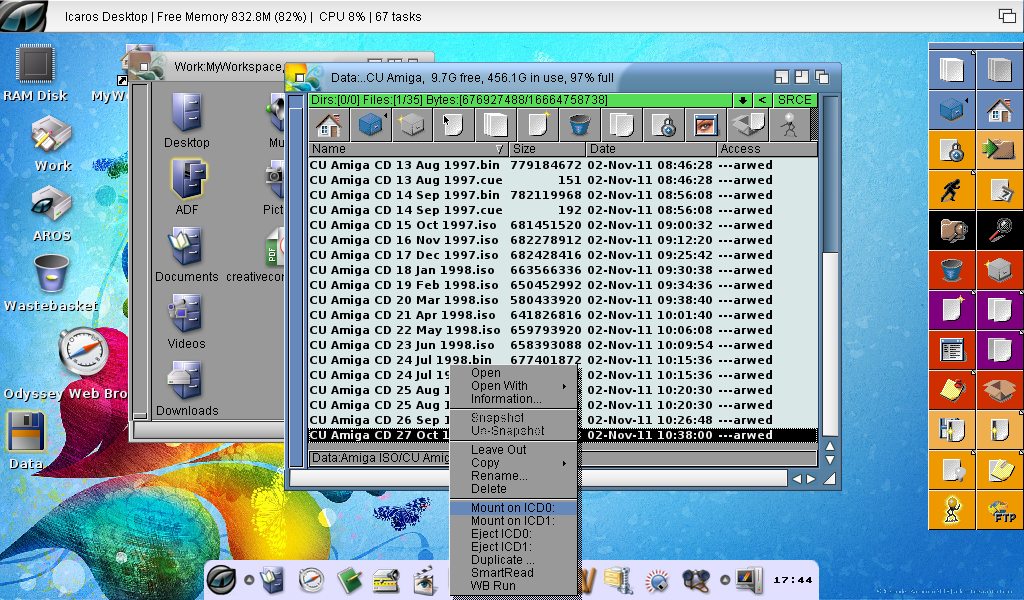 Straight away the CD icon appears, ready to open up: 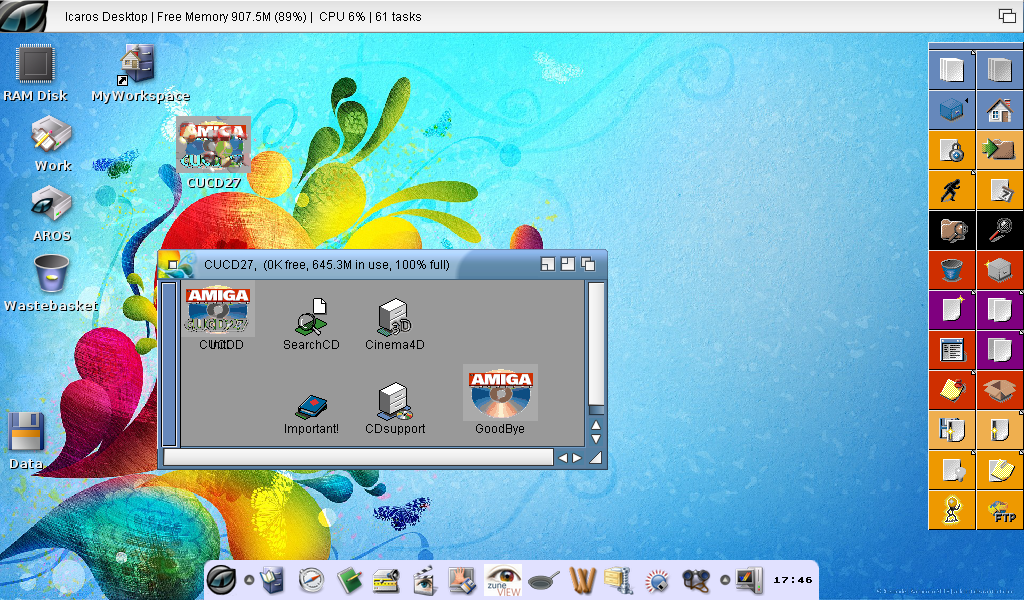 Being a big fan of Amiga (and other) modules, I next fired up HarmonyPlayer on Icaros Desktop 2.0 to play some tunes: 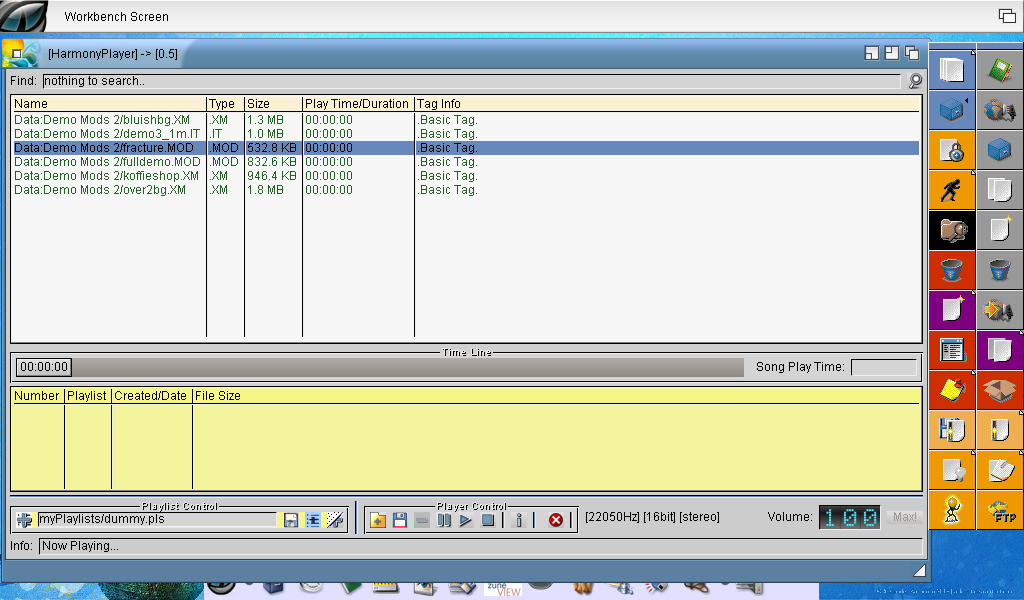 I can't imagine why you would want to, but in the prefs under Icaros Settings there is the option to change the Desktop back to the Wanderer GUI rather than the new Directory Opus 5.9 Magellan default: 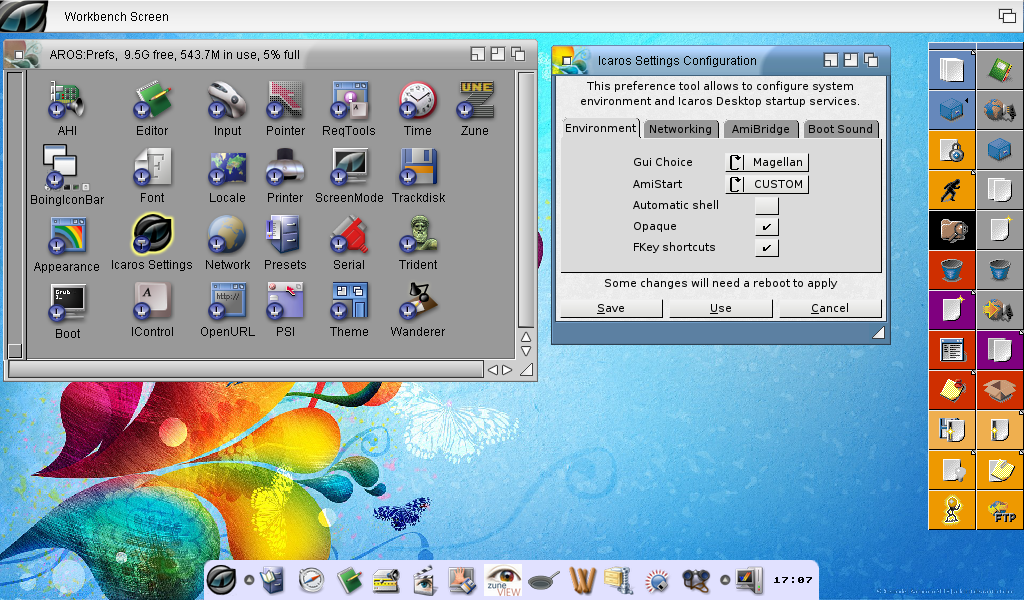 At the moment I haven't got network support working, so I can't show off the internet applications yet - once I work it out I certainly will though. Networking worked out of the box with Icaros 1.5.4 on this machine so not sure what the issue is yet. Seems some other people are having network issues too. I am keen to try out the IndieGoGo App store included with this release once resolved...

You can download software for AROS from a number of places, such as The AROS Archives here as a starting point, the AROS community forums at AROS-Exec and some interesting game developments on AROS too via AROS Gamer.

Next up on Icaros I played Putty Squad, which is an AGA game unreleased until recently by System 3 after being shelved in completed state and not released for 20 years! There is a link to it included in the Icaros Desktop 2.0 Dock icon: 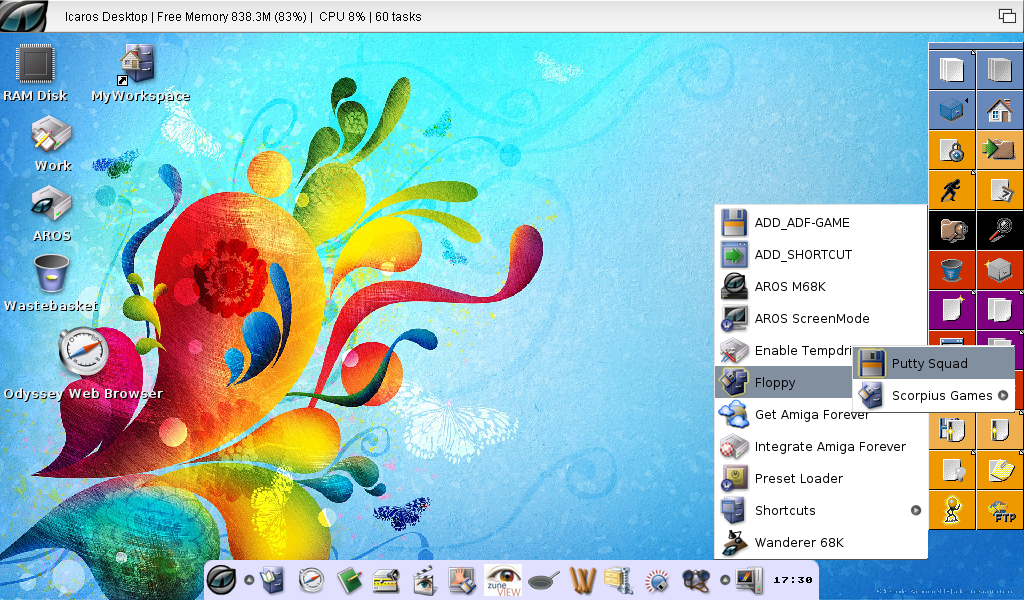 This game is launched using the Janus-UAE 1.4 environment in Icaros, which presents the configuration GUI prior to starting the program - it is setup as a standard Amiga 1200 AGA computer emulation in this example - you can modify the configuration in the tabs as needed to fine tune: 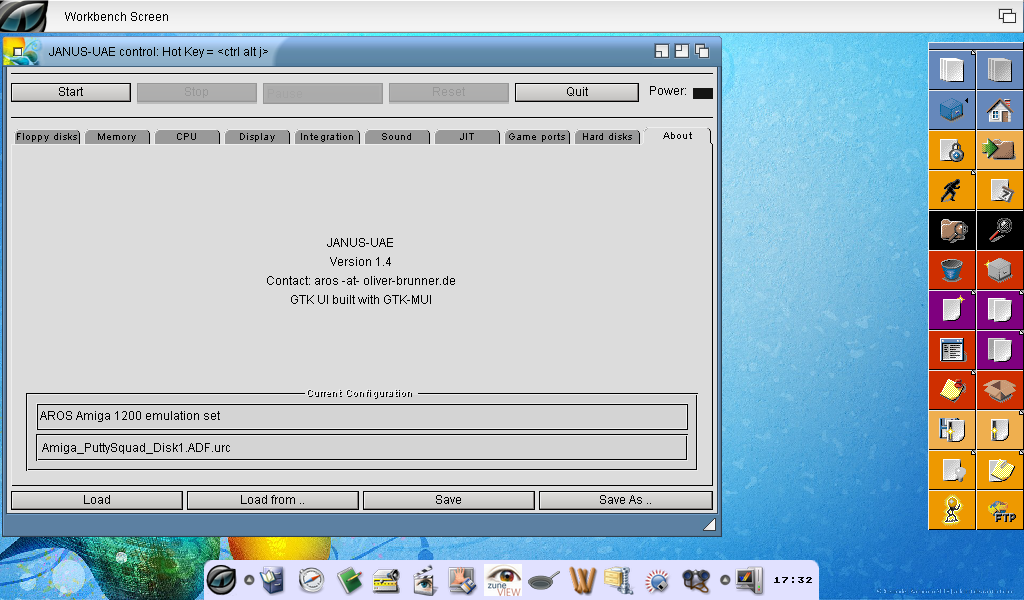 When I click Start, Putty Squad loads up and runs: 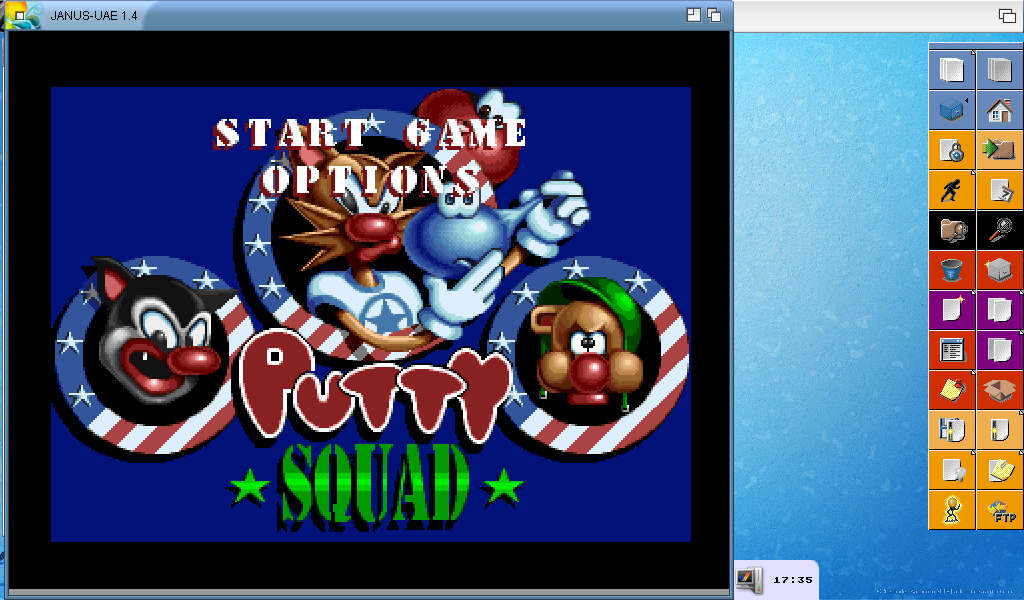 On the emulation front, plenty of system emulators are included in the Icaros Desktop 2.0 Live DVD, including VICE, the Commodore 64 emulation. I had to try this out: 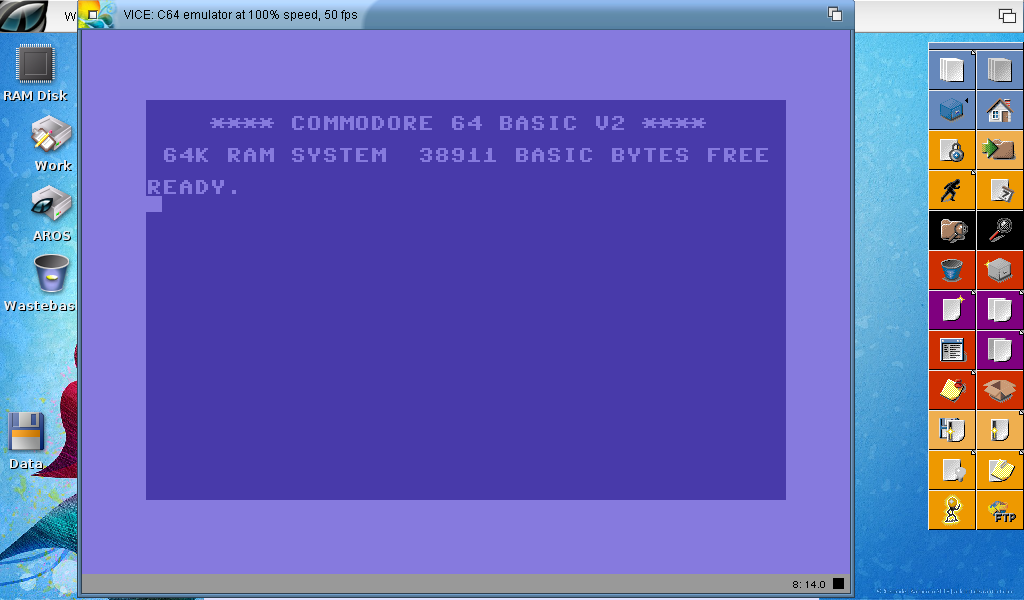 I ran the included D64 included with the distribution, which works - the emulation runs at or near 100% while running: 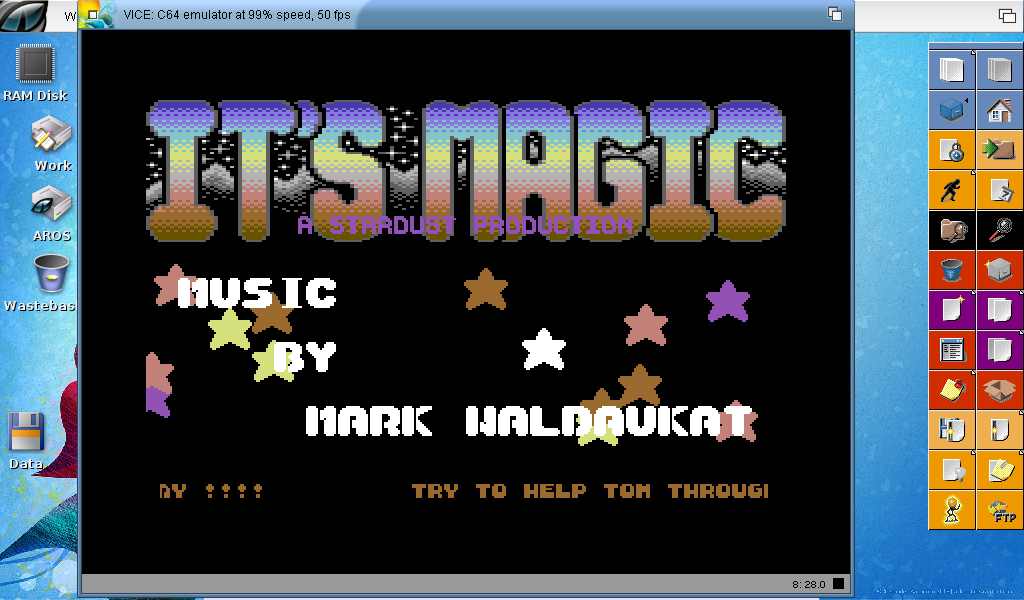 There is a lot of technical changes under the covers (like ABI0 to ABI1), but this doesn't mean much at all to me as an end user - although I am sure it is probably a good thing! I am glad they are improving Icaros, and it is great to see a new release in 2014. 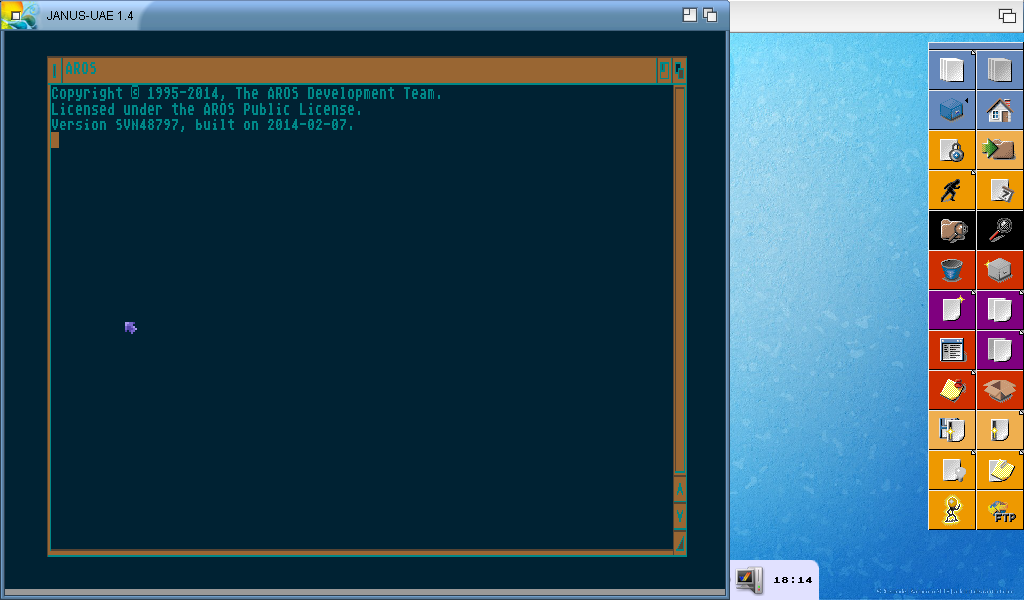 There is still plenty more to explore and setup yet as I just got started with it (especially I need to play more with Amibridge and the Co-existence functionality as I haven't set it up properly yet). But hopefully this gives you a small taste of Icaros Desktop 2.0.