Continuing with Timberwolf RC1 on X1000

I have been doing a lot of things with Timberwolf RC1 on my X1000 in the last few days since my original post here, and I wanted to follow up on that article and include some of the new stuff I have added since then!


The first thing is that I fixed the Japanese font display issue I was having in the original blog post about Timberwolf RC1. I did this by copying the Microsoft Standard English, Japanese and Korean fonts from my Windows 7 installation (Copied from Fonts program located in the Windows 7 Control Panel) to the System:Fonts/_Truetype folder on the X1000. You could also use Open source Japanese fonts for this if you don't have access to a Windows 7 machine - a reader of my previous post provided a link to download the open source Japanese fonts from http://ossipedia.ipa.go.jp/ipafont/index.html

After doing this step, the Japanese and Korean web pages display correctly in Timberwolf! In addition, because I copied the English fonts too, the English language web sites look much better also using standard Windows fonts. Some examples with the new fonts are shown below (click to expand to see the detailed appearance): 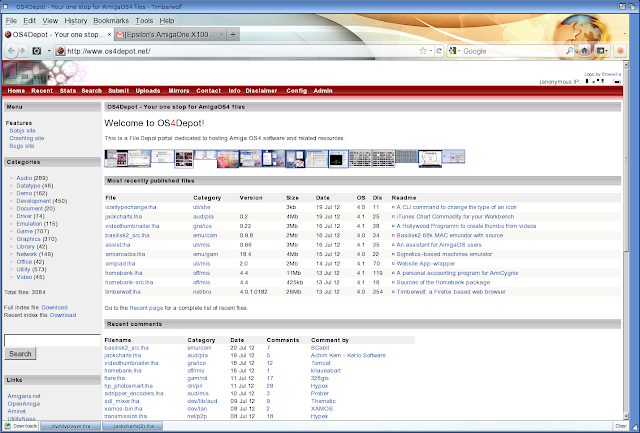 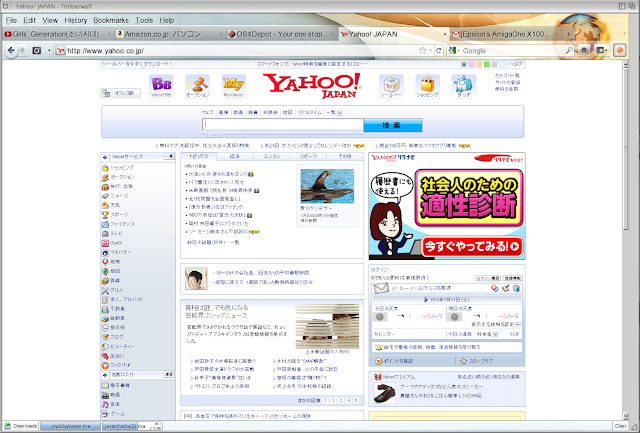 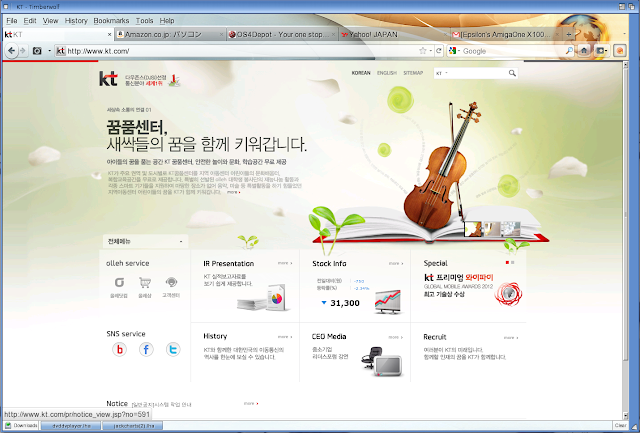 Having fixed Japanese websites in Timberwolf, I can now also use the Japanese Add-ons for Timberwolf I talked about - Rikaichan and Moji.

Rikaichan adds a smiley face icon on the right of the Timberwolf window, like below:

When you click on it, it activates and whenever you move the mouse pointer over some Japanese text, it will translate a character or the whole word on the screen, as shown below (click to expand): 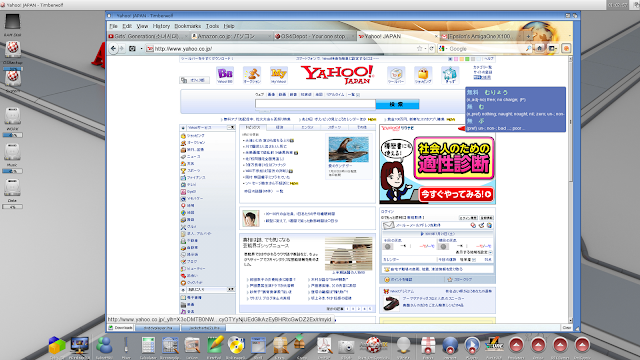 Very useful! You can click the smiley face icon to deactivate it.

Moji is also a lookup for Japanese words, which operates as a side bar add-on. You can cut and paste Japanese text into the Moji side bar or just right click on some selected Japanese test and select the Lookup Word/Kanji in Moji option. You will then see the translation - in some more detail than in Rikaichan: 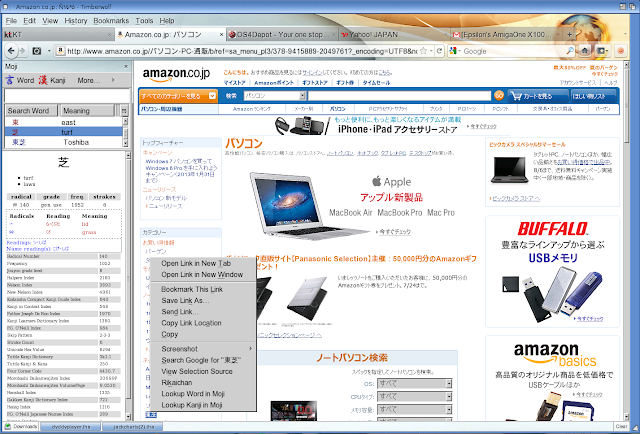 Unfortunately AmigaOS 4 itself does not support Japanese or Korean, which is why the Timberwolf title window has some strange characters in it sometimes when the website title is in Japanese, even though the website itself displays correctly. Hopefully Japanese support is added to AmigaOS4 in the future.

Anyway, moving on now to other things I found in Timberwolf!

You may have noticed I have now got a background image to Timberwolf. This is called a Persona and there are many to choose from - all available within the Add-ons option, accessible from the Tools menu in Timberwolf. If you click on the Personas link on the Add-ons main page that comes up you should see something like this: 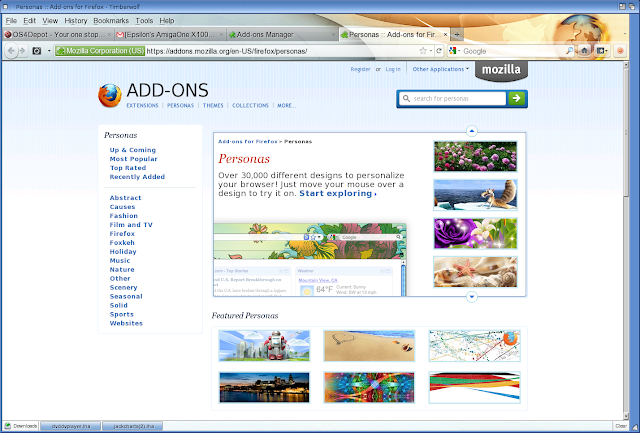 Simply move your mouse over a persona and it will automatically change Timberwolf to give you a preview of what it looks like! Simply move the mouse away to try another one! When you find one you like, click on it. A new page will come up (like below) where you can click on the Add to Firefox option to add the Persona to your Timberwolf setup permanently: 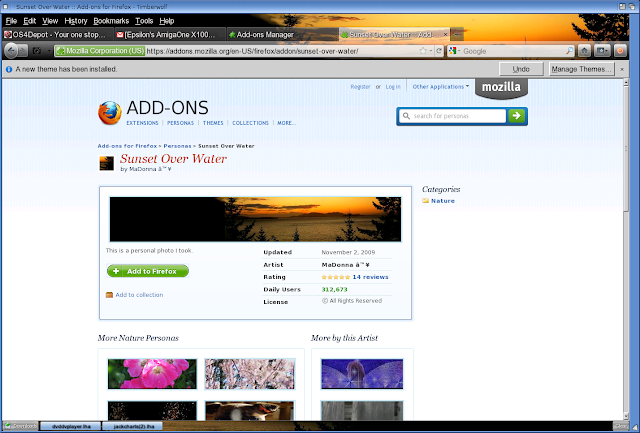 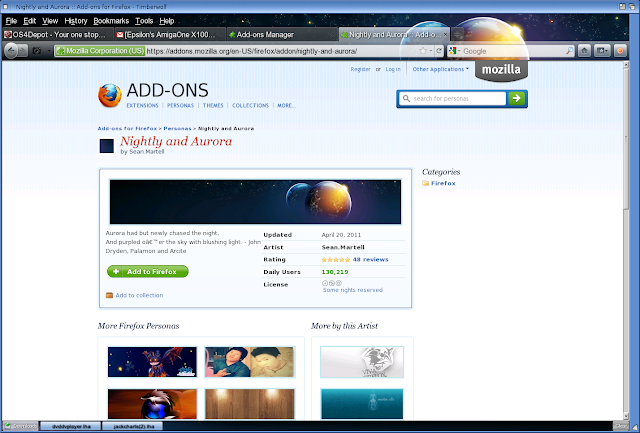 I like the Nightly and Aurora Persona, and this is one I am now using!

Next, I installed the Aniweather Add-on. This add-on allows you to display the current temperature and the next few days temperature for your home city within your Timberwolf window in the top right corner. By default it updates every two hours. You can also mouse over the temperatures to get more information (although note that the plugins for the animations don't work in this view on Timberwolf). It looks like this once configured:

The author assumes everyone lives in the US and doesn't use Celcius so if you don't live in the US, you will need to modify the preferences. The preferences are displayed in a webpage the first time you open Timberwolf after installing the Ainweather Add-on. I show this in the next few screens below, in which I adjusted the preferences for Adelaide, Australia by default (I also added Tokyo). I also changed how often it updates, and got it to display now, today and tomorrow's temperature with a description from tomorrow's temperature (click to expand): 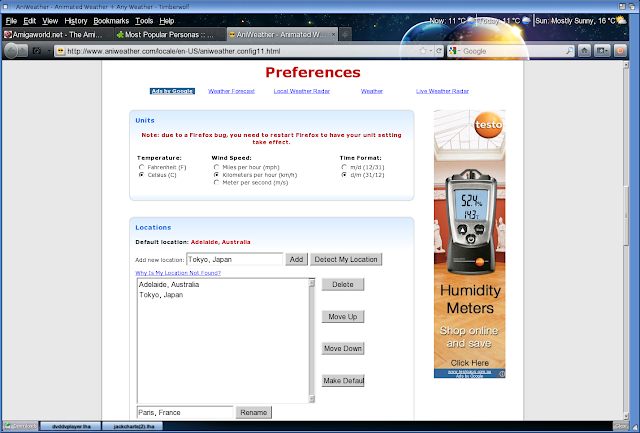 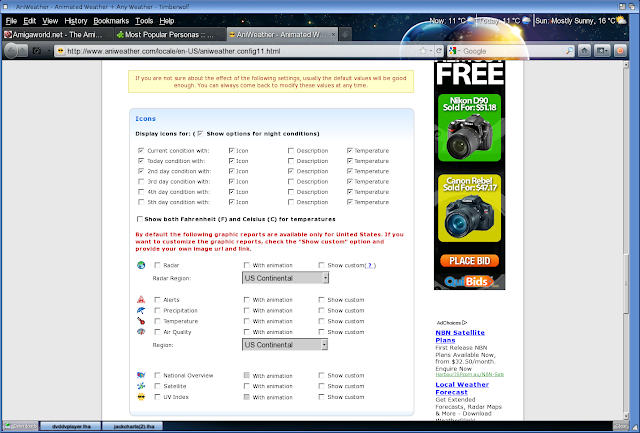 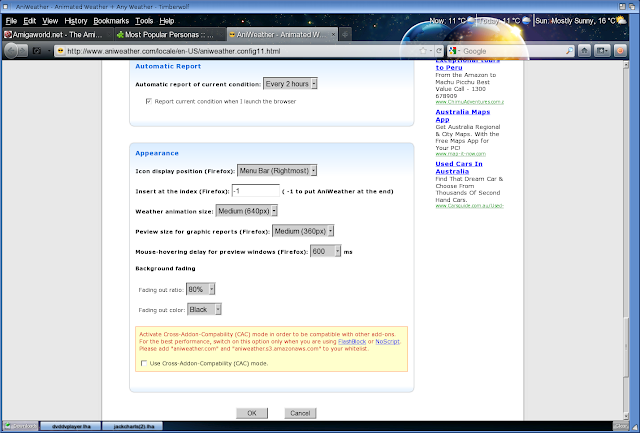 Click OK when happy with the setup of Aniweather - you will need to restart Timberwolf to see all the changes.

I will focus on just one more Timberwolf Add-On today, called WorldIP.

This addon adds a country flag next to the URL of any website you visit. If you move your mouse over the flag icon it then allows you to see at a glance more information which country, state and city the website you are viewing is hosted, and some other technical information like IP addresses, Datacentre location ,etc. I have showed two examples from the US and Japan below: 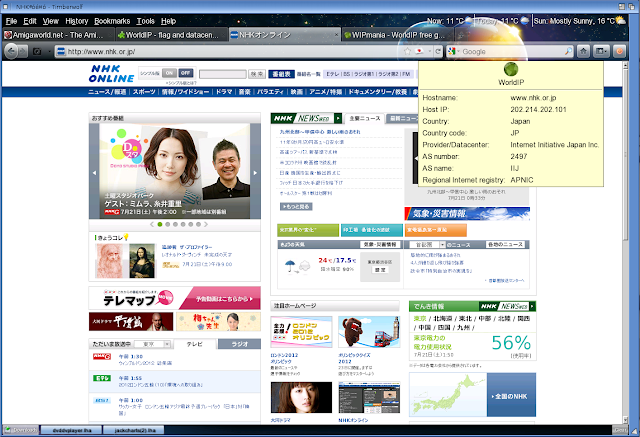 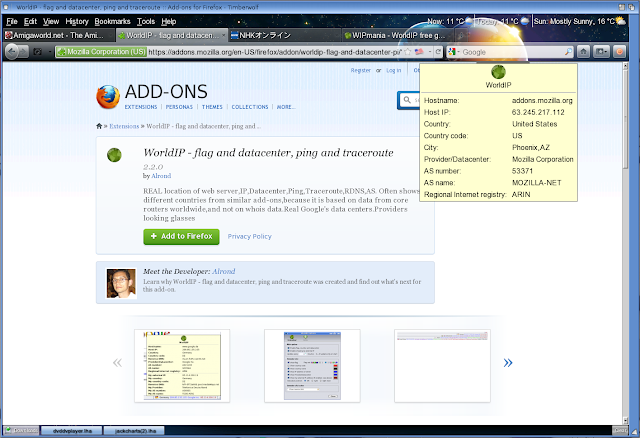 It goes much further than this too - if you right click on the flag you get a large number of options to play with. I configured the options in the menu to not display my external IP address but by default it shows this as well: 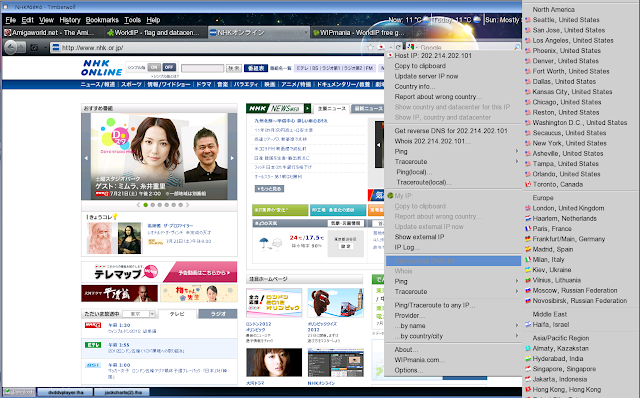 As I have said before there are so many add-ons to play with in Timberwolf on the X1000. Try some of them out!

I'll move on to play with other stuff now on the X1000 as I am happy with the setup of Timberwolf now, but if you find some other really good add-ons please let me know!