Today I wanted to take a closer look at the recently released Timberwolf Release Candidate 1 on AmigaOne X1000.

Timberwolf is a port of the commonly used Firefox web browser (used on PC's and Mac's) for AmigaOS 4.1 Update 4 or higher.

Previous versions have been beta versions and had plenty of bugs and issues. An earlier beta version was included with the X1000.

This latest Timberwolf RC1 version (available on os4depot.net) is the first release candidate version and as such is more stable.

Please note that if you have any previous version of Timberwolf installed (most likely in sys:internet/timberwolf), you need to delete the Timberwolf folder (or rename it) before extracting the new version. You will have problems if you extract the latest version over the top of the old version folder. 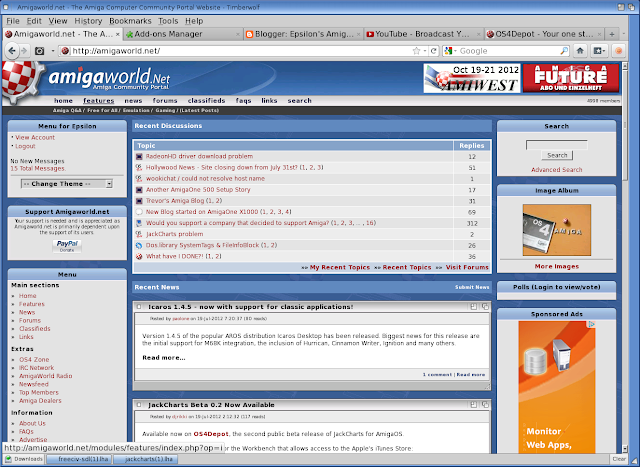 One of the big things about Timberwolf is the arrival of the first HTML5 compliant web browser for AmigaOS 4.

This means that this blog entry is the very first time I can upload my blog entry using my X1000! Very happy! Previously the Blogger upload image function didn't work which stopped me from using the X1000, but now using Timberwolf I can do it all from my Amiga!

But how compatible is it to HTML5? To find out I used the HTML5 web browser tester website at http://www.html5test.com . I am sure there are other test sites as well. The result as shown below: 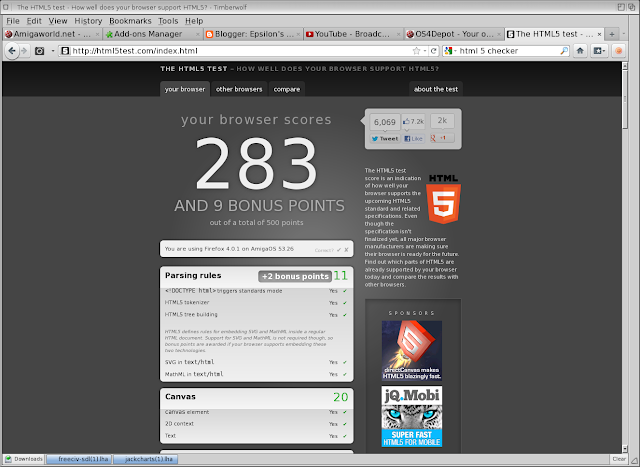 Interesting is that the test believes Timberwolf is actually Firefox v4.0.1 and knows it is running on AmigaOS.

The next shot below from the same website shows a comparison score of other common web browsers currently in use on PC and Mac today using the same test (click to expand): 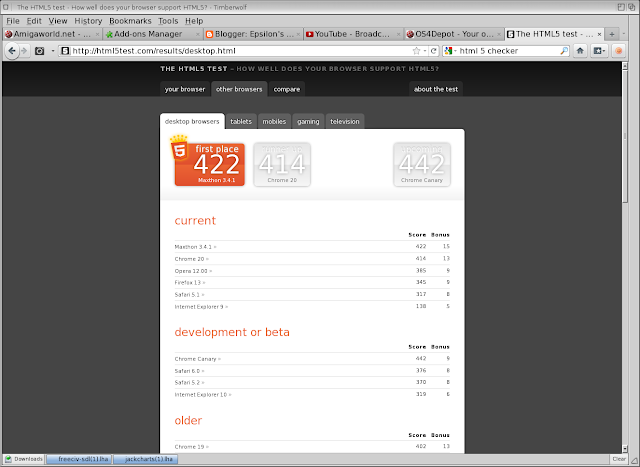 The result of 283/500 for Timberwolf makes it more HTML5 compatible than Internet Explorer 9 (currently used in Windows Vista/7) and not far from Apple's Safari web browser.  Not too bad at all!

Let's take a look at some common websites from around the world rendered in Timberwolf RC1 on X1000: 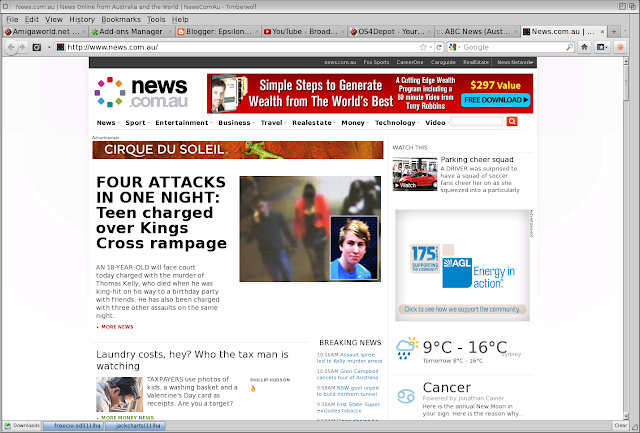 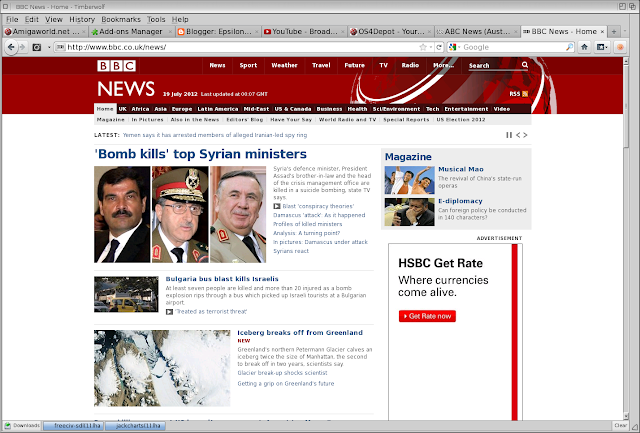 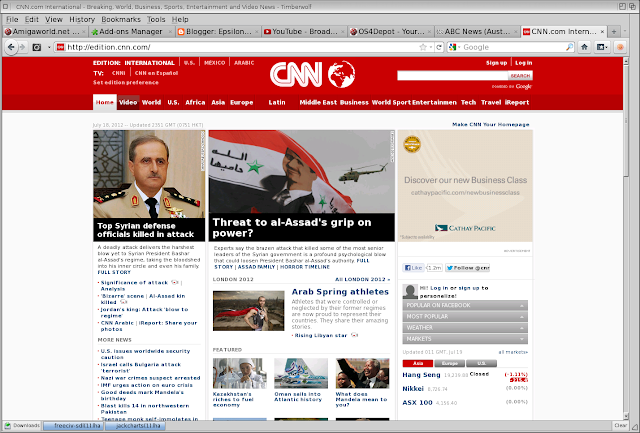 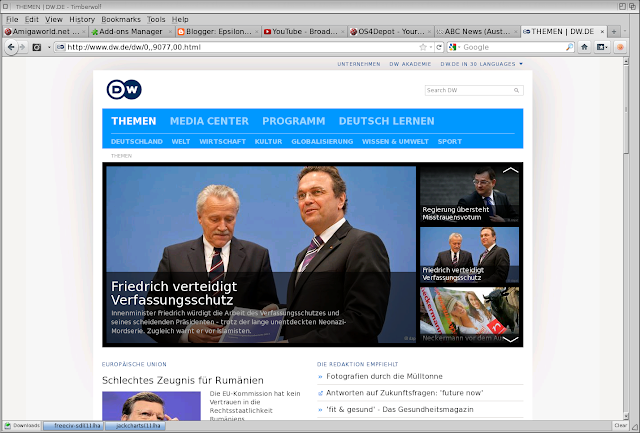 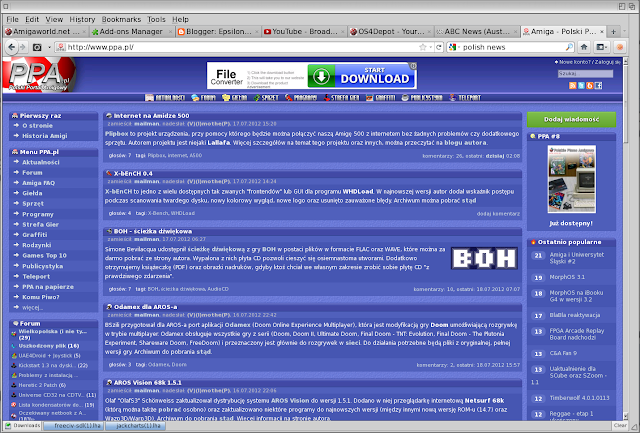 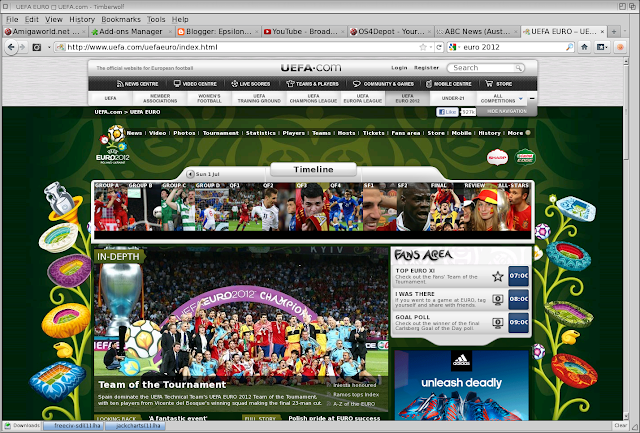 I have to say it seems to render most websites I have tested so far quite well. The exception is Japanese websites, which I guess is due to a lack of suitable Japanese fonts included in Timberwolf, although it seems to support Japanese from looking at the settings. At the moment viewing yahoo.co.jp looks like the screenshot below. 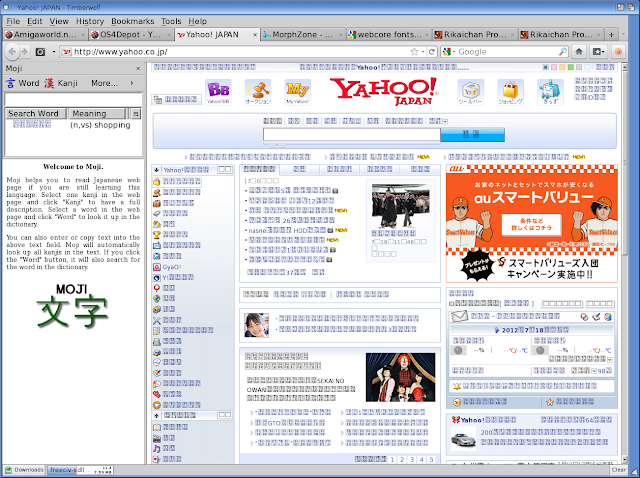 Note that in this screenshot I am also running Moji sidebar and Rikaichan add-ons for translation from Japanese to English which both work well in Timberwolf.

Update 21/7/2012 - I have now fixed this problem viewing Japanese (and Korean) websites by copying Japanese and Korean true type fonts from my Windows 7 installation to the sys:fonts/_truetype folder on the X1000. I can now view this webpage and all Japanese websites I tested correctly!

Now, if you want to use the Bookmark feature in timberwolf you need to manually install a DOSDriver called RANDOM. Weird, but there it is - only on Amiga would we have a RANDOM DOSDriver with an 8-Ball icon!

DOSDrivers are mounted when AmigaOS4 boots and mounts essential devices like AUDIO, AUX, PIPE and virtual DiskGUI CD/Floppy devices like ICD0 and IDF0.

So how do we do this installation of the RANDOM DOSDriver?

To start with, if you go to the System:Devs/DosDrivers folder on the Workbench, this is the live DOS Drivers folder. Now, while leaving that DOSDriver window open, also go to System:Storage/DOSDrivers, which as the name implies is a storage location for DOSDrivers that are not currently being used. 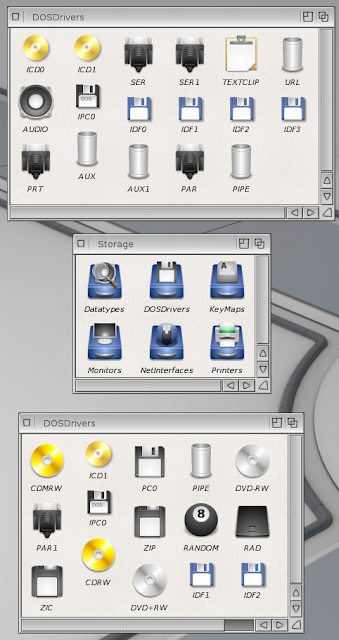 You will need to reboot for this change to take effect. If you notice any stability issues on AmigaOS4 after this, then simply reverse the process to move the Random device back to the Storage/DosDrivers location and reboot once more. I personally found response of AmigaOS4 laggy and slow after putting the Random device in place - since I don't need to use Bookmarks I don't use the RANDOM DOSDriver and can't comment on how well it does/doesn't work. Perhaps this will be improved in the next version of Timberwolf - it is the first release candidate after all.

While on the negatives, I previously commented on this blog that YouTube videos are slow, audio choppy and basically unusable on Timberwolf, and only playable at all if using the HTML5 trial mode of YouTube. This is still true unfortunately, so I still need to use MUI-OWB Web Browser to stream YouTube videos.

Timberwolf also can't play any Flash video files, commonly still used on news websites...mind you, no other Amiga web browser can do this either!

Having said all that, Timberwolf offers plenty of extra functionality ported from Firefox - most exciting is the add-on functionality, which allows users to add additional features to the browser to, for example, enhance the performance and control use of websites and downloads better.

You can access Add-ons from the Tools Menu, and select Add-ons, as below: 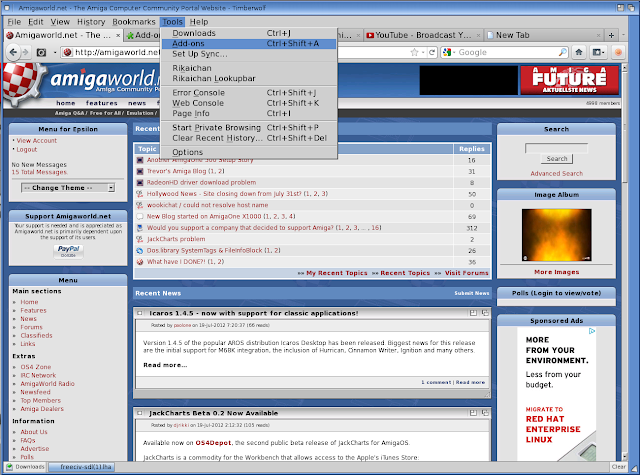 You will then get the Add-ons page which allows you to search and install add-ons for Firefox as shown below: 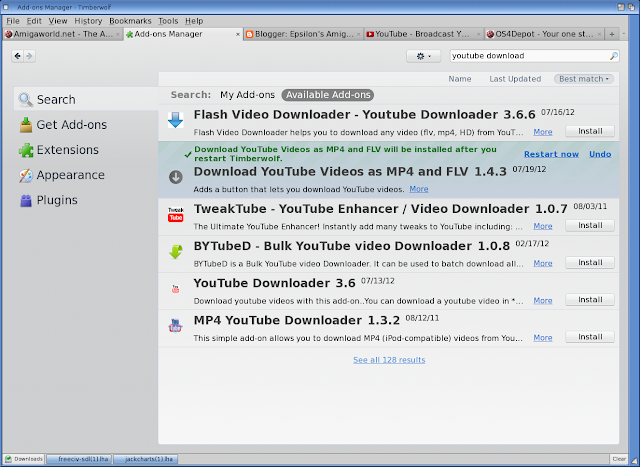 I should note that not all plugins will work with Timberwolf - a similar problem exists for Firefox on PC, Linux and Mac too. I will focus on a few add-ons I have tested and I know work on Timberwolf.

The first add-on I want to look at for Timberwolf is Download StatusBar 0.9.10. You can get it from https://addons.mozilla.org/en-US/firefox/addon/download-statusbar/. I noticed that for some reason it is not on the add-on search results like the others shown here so please use the link above. This add on allows you to see and control your downloads much more easily in Timberwolf. It displays a status bar at the bottom of the Timberwolf page that shows any downloads in progress or completed, like the screenshot below:

As shown, the download files in progress are shown graphically in the status bar, which you can mouse over to see more detail showing where the file is being downloaded from, where it is being saved, amount downloaded, time left and percentage complete. You can click on an individual download to pause it, and click it again to resume.

In addition you can click on the Downloads button on the left of the status bar to reveal a menu that allows you to change the options, to pause, resume or cancel all downloads! 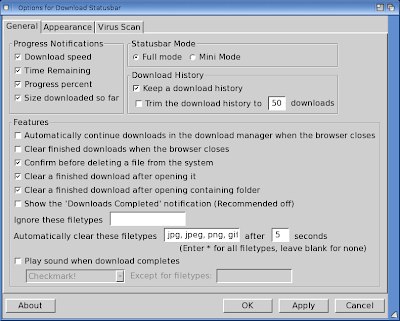 I have to say I love this functionality in Download StatusBar and it has got me more excited to try out some of the other add-ons now!

Next, I tried Snapshoter 1.01. As the name implies, it snapshots the current website you are on to a image file on your hard disk. It adds a camera icon next to the navigation bars in Timberwolf as below:

If you click the down arrow next to the Camera icon you get a menu to choose whether to capture a complete page, the visible section only and to access the options:

The options for Screenshoter allow you to change the default action when pressing the Camera icon, and to change where the pictures are saved to and the file format (PNG, JPEG) and hotkeys mapped to perform a screenshot: 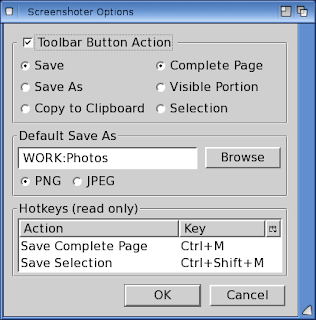 Here is an example Screenshoter image export from Timberwolf using abc.net.au/news as an example. As a guide, it takes about 5-10 seconds to grab, depending on how big the web page is. This one is from the main page of abc.net.au/news (click to expand):

The last one I will look at today is Download Youtube videos as MP4 and FLV 1.4.3. This adds a Download button to YouTube videos in timberwolf to allow downloading of videos to your hard disk to playback separately using MUI-Mplayer.

Unfortunately Timberwolf does not offer an option to stream the content from the Youtube website directly through MUI-Mplayer, as I can do with MUI-OWB (I detailed in an earlier blog entry how to do this). So I will continue using MUI-OWB for YouTube streaming. But, back to downloading Youtube videos using the add-on.

Screenshot below of YouTube with video that can't be played back in Timberwolf, with the download option available with a number of formats selectable depending on the source video options (click to expand): 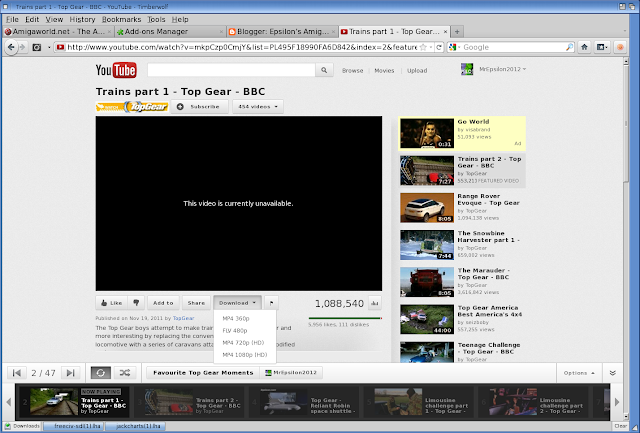 Once selected I then select whether to save the file only (this works), or choose something like mplayer to play back the file after downloading. When I tried to the option to open with mplayer I note that this doesn't work - I get an error playing the file (probably because mplayer is not called correctly from Timberwolf)

You can tick the box to do this option automatically so you don't have to see this prompt every time: 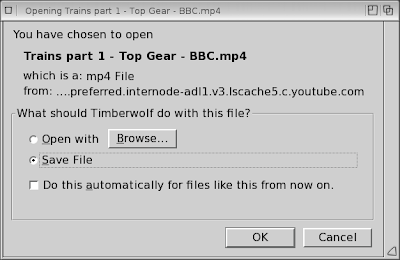 Because I am using status bar add on I can then see the download in progress... 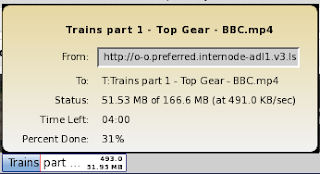 And after running MUI-Mplayer I can play the downloaded mp4 YouTube video on the X1000. Really enjoyed this episode: 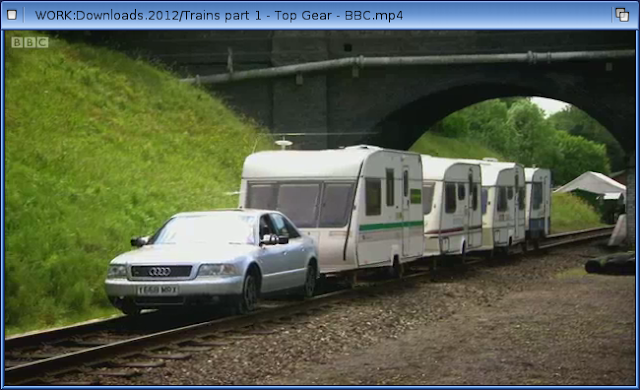 One thing worth mentioning is that Timberwolf remembers what websites you had open in each tab when restarting the browser after installing an add-on and will put you back where you were before the restart - nice feature!

There are plenty more Timberwolf add-ons to explore and I could spend many more pages on it - my suggestion is to try them out yourself and see what works well. Please let me know any good ones I can add to mine!

Speed of web page loading is good - it is a little bit slower than MUI-OWB but it is getting better and better and the HTML5 compatibility makes a difference!

I hope you this taster gets you interested to try out Timberwolf RC1 for yourself on your X1000!

I have now added a second blog post with some more Timberwolf features here!