As a follow up to my original AmiCygnix blog post, I wanted to show the new feature of AmiCygnix v1.1 to run AmiCygnix applications standalone.

This mode runs the applications as a normal windowed application within AmigaOS4 on the AmigaOne X1000.

I was excited to try this feature out! Please note that only a few AmiCygnix applications so far have been updated (and made available on os4depot.net) to have launch scripts for the standalone mode. More applications will be updated with this in the future I am sure.

The good news is that you can also make standalone launch scripts yourself for your other AmiCygnix applications that don't yet have a standalone launcher - I will show you how a bit later in this blog entry.

In the screenshot below I show 4 AmiCygnix applications running in standalone mode under AmigaOS4 - GIMP, Gnumeric, xMahjongg and ROX-filer: 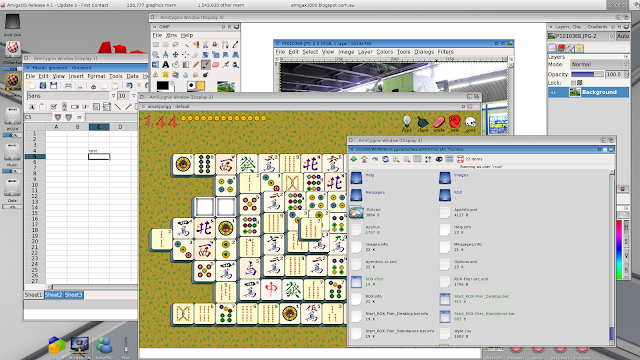 I am not sure if there is a limit on how many AmiCygnix windows you can have open at once, but 4 works fine!

So how do you run the standalone mode? Lets take a look at AmiCygnix folder, which for me is in Work:AmiCygnix, as below: 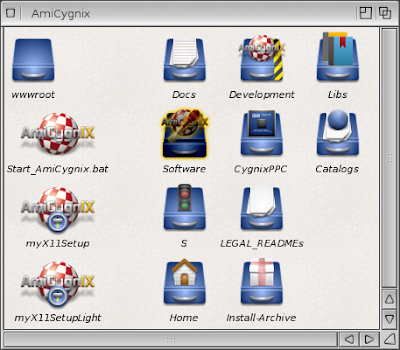 So let's look at the Homebank-4.4 folder (Homebank was very recently released on os4depot.net): 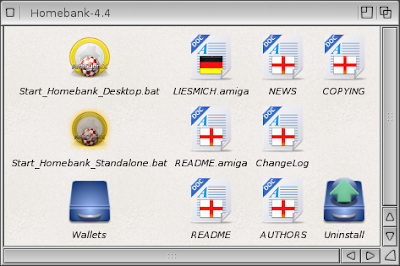 Start_Homebank_Desktop.bat runs the application within Amicygnix on it's own separate screen to AmigaOS4. You can also run Amicygnix desktop and then run it from within AmiCygnix.

Start_Homebank_Standalone.bat runs the application within a window under AmigaOS4.

In reality the application is still running within AmiCygnix, just in a windowed mode. This allows you to run Amicygnix applications on the standard AmigaOS4 desktop on your X1000!

I like this feature because for me it is easier to work with one desktop than two desktops hidden one behind the other. I know other people may prefer the multi desktop environment and that is ok - you can run it either way!

When you double click to run Start_Homebank_Standalone.bat you will first get a window that asks you to specify how big you want the window running the application to be, as below: Keep in mind that you can't change the resolution after launching - you have to close the window and run it again to change the setting.  You shouldn't need to change the other settings on this screen unless you really want to have a different AmiCygnix Window Manager or a different background image in the window...

So to start with I recommend choosing your preferred window size (I normally use 1024x768 but there are some exceptions like GIMP which needs more space), leave the No longer display setting window unchecked and then click Save. If you are happy with the window size, the next time you launch the application you can click the No longer display setting window option and after clicking Save it will no longer prompt you for the window size.

All going well you should then get a window like the next screenshot, running Homebank under AmigaOS4: 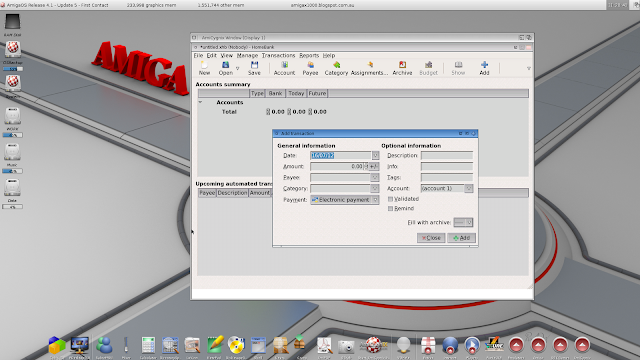 Here now are some screenshots of various AmiCygnix applications running in standalone mode under AmigaOS4 on the X1000! All these programs are available to download from os4depot.net. As always, please click to expand the screenshots for a closer look! 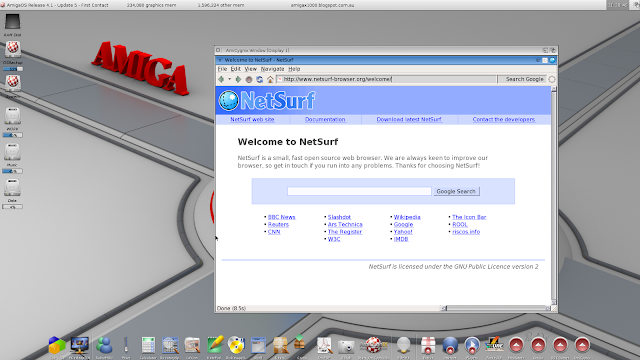 Mahjongg (included in the amicygnix-games package): 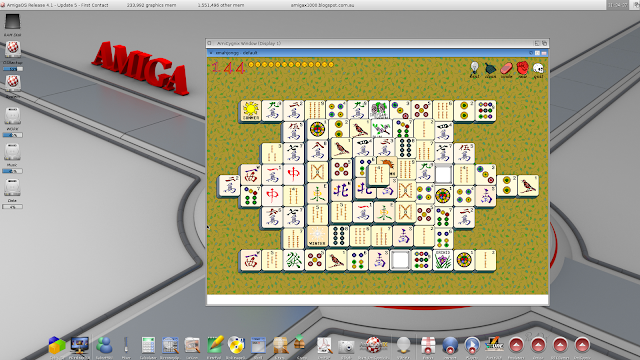 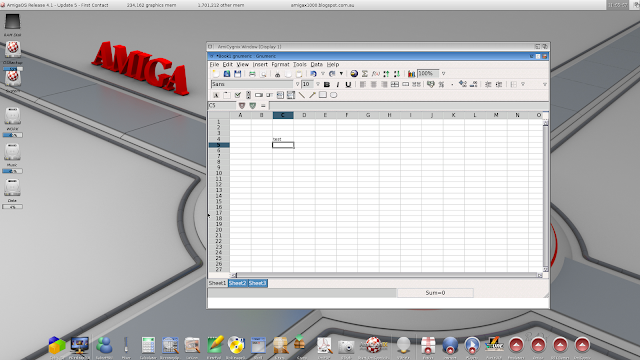 From my limited testing Amicygnix programs seem to run fine in the standalone mode. Please keep in mind that applications launch Amicygnix in the background first and then run the application. So there is a delay of a 5-15 seconds while launching applications depending on how big the program is - eg. Gimp takes around 15 seconds and xmahjongg and gnumeric take 5 seconds to launch on the X1000.

We will do this by copying an existing standalone script and modifying it as needed for Gimp.

I will assume at a minimum that you have already installed AmiCygnix-base v1.1, AmiCygnix-tools, Gimp 2.4.7 and Homebank 4.4. All are available on os4depot.net. If you need help with the AmiCygnix installation I have already written a full step-by-step how-to for installing it in my AmiCygnix blog post here!

So, first we should browse to the Homebank-4.4 folder we looked at earlier (located in Work:Amicygnix/Software/Homebank-4.4 for me).

Then, right click on the Start_Homebank_Standalone.bat icon and select Duplicate, as shown below (Click to expand if needed): 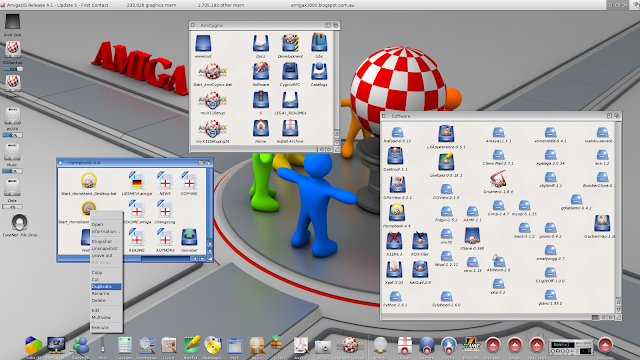 You should then have a Copy_Of_Start_Homebank_Standalone.bat icon in the Homebank folder as below:

So now right click the icon and select Rename to change it's name to Start_Gimp_Standalone.bat. We then need to move this renamed file to the Gimp-2.4.7 folder as below: 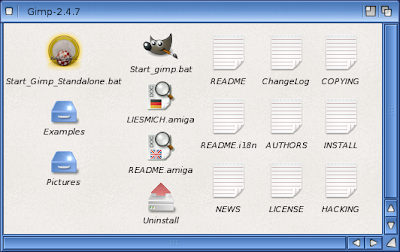 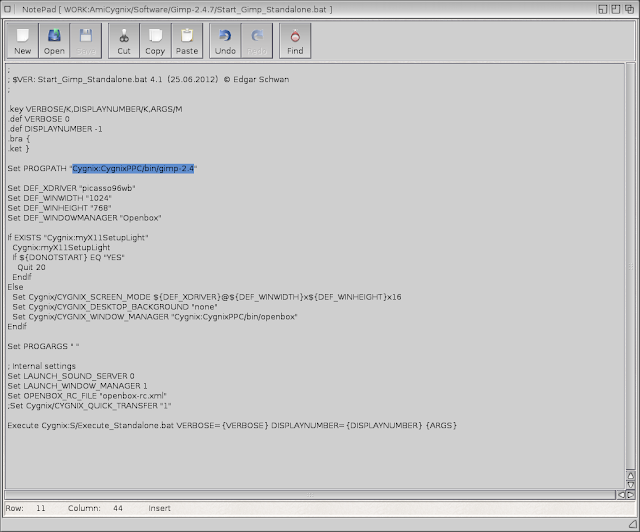 If it looks like the screen shot above then Save the script and Close Notepad.

Now it's time to try it out!

After launching the new Start_Gimp_Standalone.bat icon, when prompted for the Window size, I selected 1440x920 window size as it needs a bit more space for the various windows it has, as shown below once running: 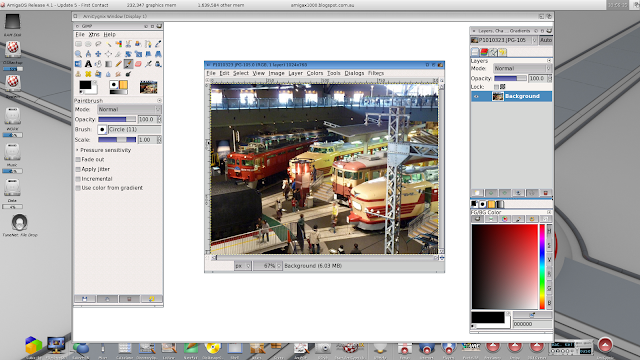 You can do the same duplication and editing process for other AmiCygnix programs without a standalone script, like xMahjongg, Gnumeric, and so on!

To finish, I also added these various Standalone icons to a subdock called AmiCygnix on the AmigaOS4 Dock for easier access. I also changed the standalone script icons I created in the dock to look the same as the AmiCygnix launch icons (where needed like Gimp and Gnumeric) like below:

I don't want to get into the dock functionality and configuration in this entry but I will cover the configuration of the dock in a later blog entry!

I hope (if you haven't already) that you now want to try out AmiCygnix applications in standalone mode on your X1000!