Today I wanted to spend some time on getting started with AmiCygnix on the AmigaOne X1000.

So what is AmiCygnix? Basically, it is Unix X Windows environment running under AmigaOS4 which allows Unix applications to be more easily ported to AmigaOS4 and the X1000.

There is a lot of Unix software that has been ported to AmiCygnix already, like Gimp, Netsurf, Abiword, Gnumeric, MySQL, Apache Web Server with PHP, and many more Unix applications and games.

All of the Amicygnix software packages can be downloaded from OS4Depot.net. 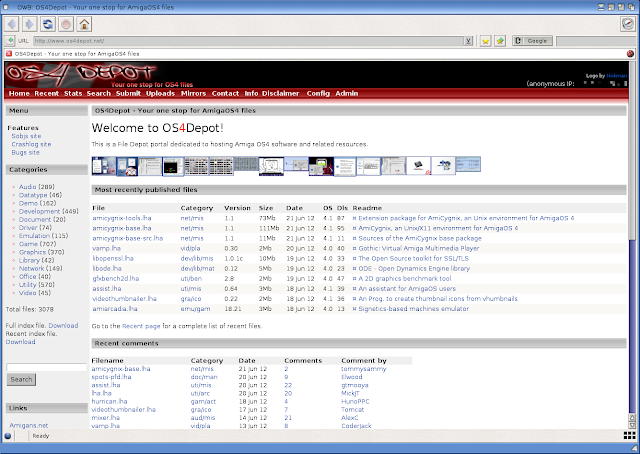 Last night they released v1.1 of AmiCygnix-Base and AmiCygnix-Tools with updated applications and features! I am particularly interested in the new feature to run Amicygnix applications within AmigaOS4 Workbench screen itself, side by side with native AmigaOS 4 applications. This hopefully means I no longer have to run AmiCygnix on a separate screen to Workbench. I will try this out in another entry!

The Amicygnix-base and Amicygnix-tools files are quite large, around 111MB and 76MB compressed and over 11,000 files in the base package alone, so keep that in mind when downloading and extracting - it takes time... 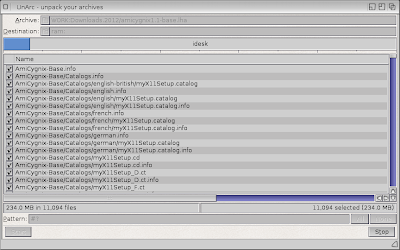 Amicygnix-base is the minimum required to be installed for the base operation of AmiCygnix. I recommend also installing AmiCygnix-Tools also, and choose what applications you want after those are installed. I installed all the packages available, some include amicygnix-games, AAMP (Includes MySQL and Apache Web Server), Gimp, Xsane, Pidgin, etc.

The installer for AmiCygnix and it's applications is a breath of fresh air compared to most installers on the Amiga recently - nicely presented and works well.

However there are a lot of options when installing AmiCygnix-base in particular, and to help people out I have included a step by step of what to expect when installing it.

I should preface this guide by stating that I previously installed the older AmiCygnix 1.0-base and tools packages on my X1000 - so if you are installing AmiCygnix 1.1-base for the first time, you should expect to get some different prompts during the installation about creating assigns in your startup files, which need to be done for AmiCygnix to work. Because I already previously installed the older version, it will just prompt me to update the installation already there and not redo the assigns in the startup files. (a new install won't see these update prompts)

After you have downloaded and extracted amicygnix-base.lha somewhere on your hard disk, double click on the Install icon to get started installing AmiCygnix-base: 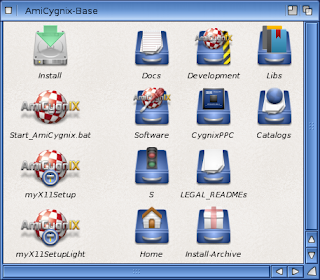 Below is the installation start window, click Proceed to move on and the same for the following two screens as well: 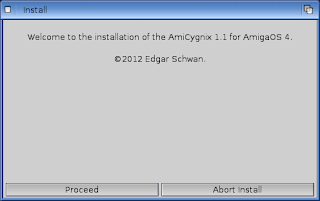 You will then see this message below telling you things you should know before installation. Read carefully and close the window to proceed with the installation. 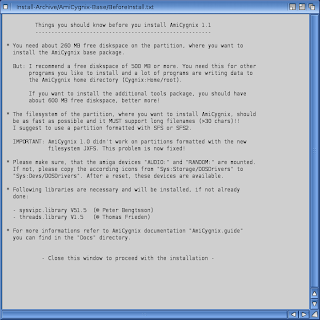 In my case, because I already had AmiCygnix 1.0 installed, it detected this and prompts me to backup and update the existing installation. I said Yes. 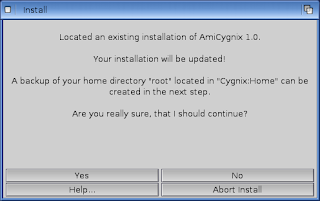 Next, the install scripts takes care of backing up the old version for you, which is a nice touch! I said Yes to do this of course! 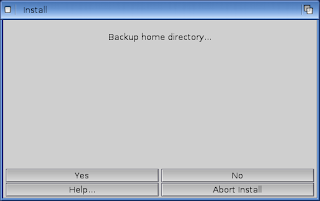 The installation then proceeds as below, but you will be prompted with many different questions along the way, and I will cover them in this guide. 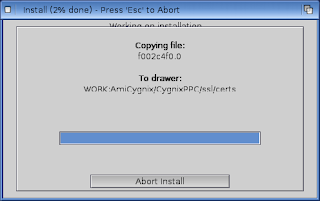 The next screen just lets you know it will set some environment variables - just press Proceed. 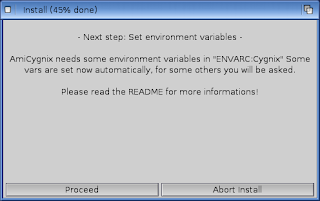 This next question is about the AmiCygnix screen resolution you want to use - make sure this is correct and works with your monitor! If unsure, it is fine to pick a resolution that matches your Workbench resolution as I did below: 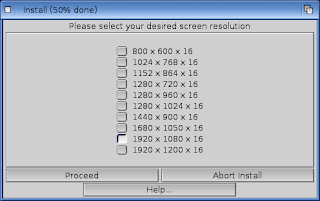 Next up it asks for your language - since I use English I can leave the default language en and click Proceed. 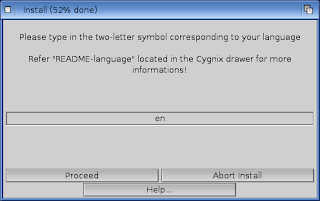 Next it asks for you character set, which you can leave as default if using English as default and Proceed. 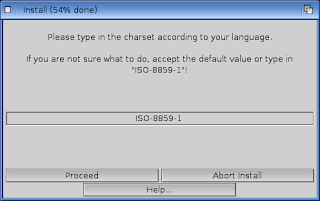 The next question relates to your Timezone location, which needs to be entered using Country/Location format. To help, a zoneinfo window opens up in this step showing all the timezone countries and locations underneath which you can browse - these names correspond to the text you need to put into the dialog box to then Proceed. Once you have entered the text in the box correctly, you can close the Zoneinfo window as it is no longer needed for the installation. 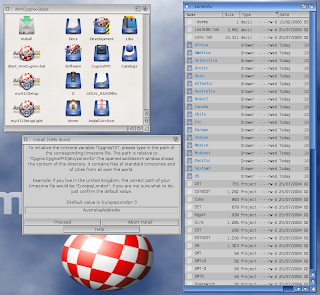 The next question relates to Quick Transfer feature which you want to say Yes to enable on X1000 machines and then Proceed. 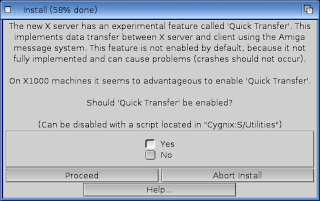 The next question is for Windows users - it asks if you want to use Windows Cut, Copy and Paste shortcut keys instead of Amiga shortcut keys for the same functions. I left it as No and pressed Proceed, but this is really personal preference! 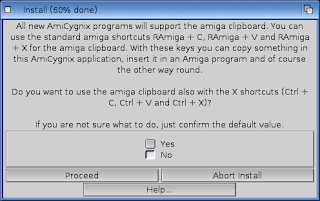 The next few questions I left at default Yes/Enable and clicked Proceed. 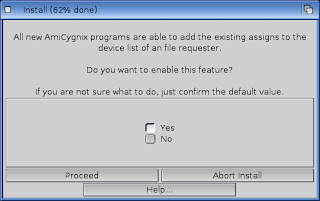 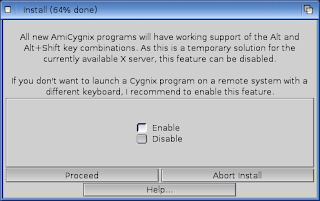 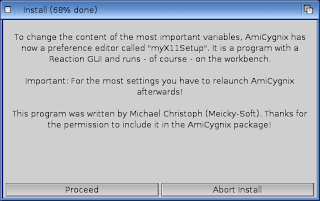 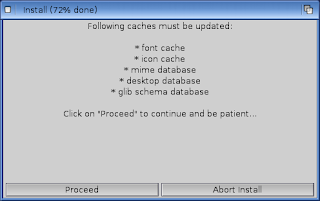 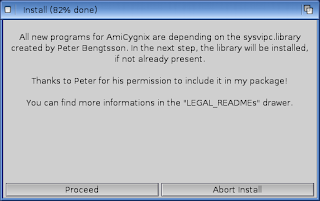 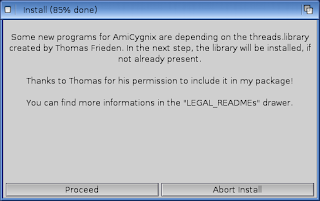 Installation has advised it is now complete! Congratulations! A reboot of the X1000 is needed to get AmiCygnix working correctly. 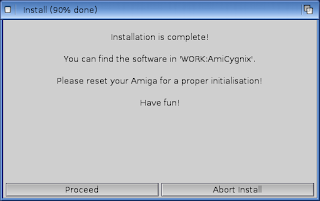 I then proceeded to install AmiCygnix-Tools and the other applications I wanted to use, like Gimp, AAMP (Apache Web Server and MySQL), Pidgin, Games, etc. The installation process is straightforward for these installations so I won't show them here.

Having finished the installations, I launched AmiCygnix from Work:AmiCygnix by double clicking on Start_AmiCygnix.bat icon. I later added this to the Workbench dock for quick access.

Below is a screenshot of the AmiCygnix 1.1 desktop: 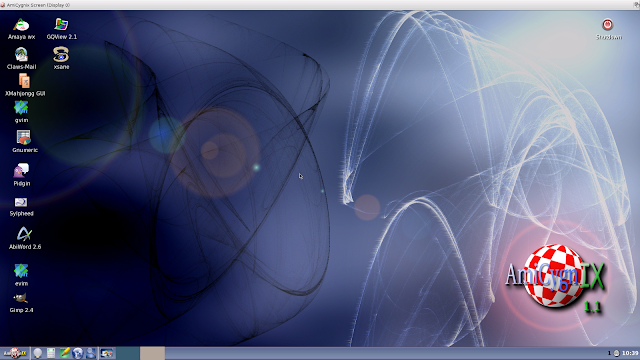 The next screenshot shows GIMP running, editing a photo of a tram I took in Tokyo: 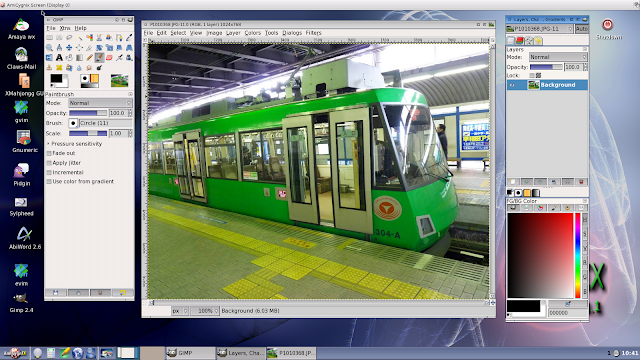 Next up is a screenshot showing Abiword (Word Processor) running with beautiful crisp fonts and photo image showing in the document: 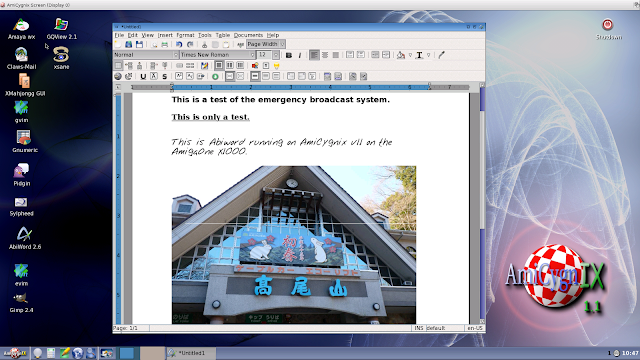 And finally, a screenshot showing Mahjong running in Amicygnix: 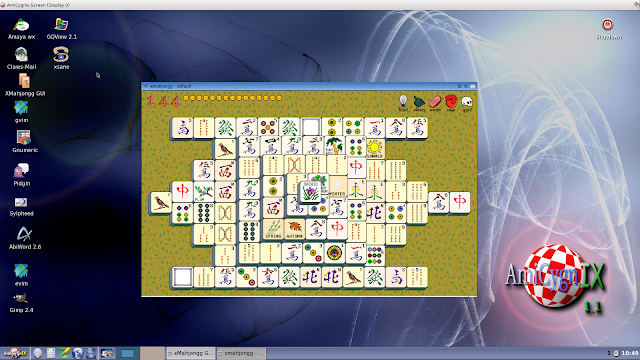 As part of doing this you end up with some annoying screen prompts on AmigaOS4 boot up that have to be closed every time. To remove these I edited some configuration files to comment out the lines that pop up the text with a ";". These files are start_httpd.bat, start_aamp.bat, and start_mysqld.bat  in 3 separate folders under Work:Amicygnix/Software which I show in the next screenshot for your easy reference.

I also changed the default website location in Apache Web Server because I created a new folder in Work:AmiCynix/wwwroot for hosting my website files. To change the location of the website folder in Apache, you need to run myApacheStarter which is located in the Work:Amicygnix/Software/AAMP-1.1 folder. You also use this program to start/stop the Apache web server. I show the "DocumentRoot" location that needs to be changed in the screenshot below.

I also edited the Apache WebServer to include default.htm in it's webpage search order so that I can use my website pages I coded for Windows IIS that use default.htm as the start page to work under Apache. I show all these edits in the screenshot below (click to expand): 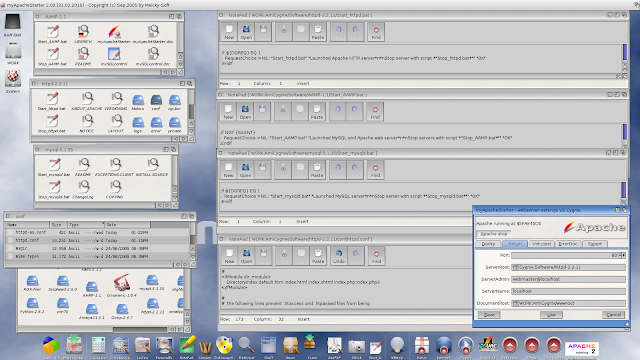 After this, I then changed my Amiga's networking setting to use a fixed IP address, and then tested that my website works, running on Apache on my X1000! 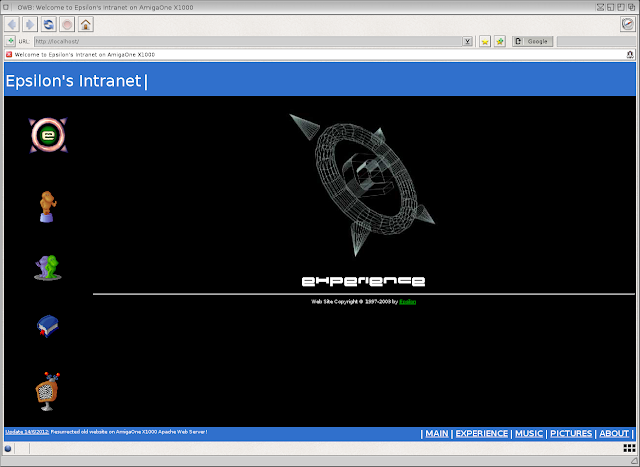 I will of course do some more playing around with the AmigaOS 4 integration feature of AmiCygnix later on and report back on how it goes in this blog!